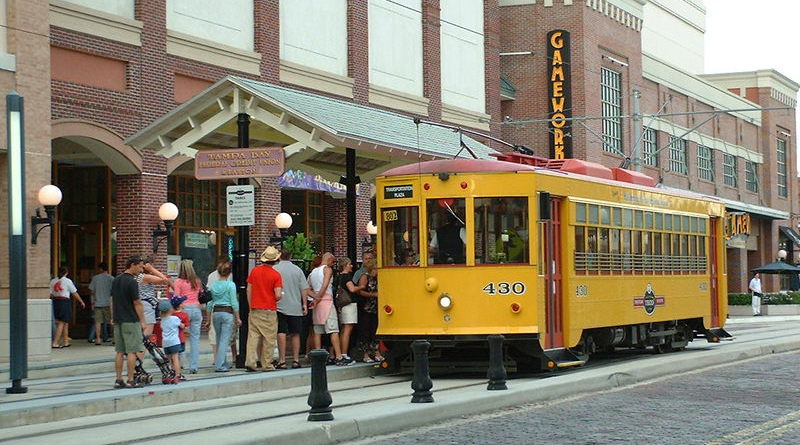 Tampa’s streetcar system, once the most extensive in Florida with its 53 miles of track and 11 major routes, stopped operations in 1946. By that time, autos and buses had become the dominant mode of travel for the area’s residents. By the year 2000, Tampa had become a city with some of the worst public transportation in America.

In an effort to sustain the economic upturn that took place in the 1990s, ease transportation woes and strengthen its joint bid with Orlando to host the 2012 Summer Olympic Games, then Mayor Dick Greco and city planners undertook “Development-Oriented Transit” initiatives. A 2.5-mile “heritage trolley” streetcar system was built to link historic Ybor City with the burgeoning Channelside district, downtown business center, the Seaport, Convention Center and Aquarium. With the nostalgic look and feel of its car, many believed that the Tampa Electric Company (TECO) streetcar line would primarily serve visitors to the city. However, the line has also succeeded in attracting residents traveling to the business district. As a result, the $55 million invested in building the TECO system has helped to attract over $1 billion in new private investment. According to Michael English, chairman of the Tampa Historic Streetcar, Inc., nearly 2,500 new housing units have been built or are under construction along the line. Another 5,550 units are planned. Plans for the trolley system call for a phased expansion, increasing the line to 10 miles in length. The first stage of the project will extend the line from the Southern Transportation Plaza near the Tampa Convention Center northward to a new cultural arts district located near the Tampa Bay Performing Arts Center.

Thus the goal of improving mobility and connectivity has been partially achieved. The system serves approximately 1,300 daily riders, though it can handle much larger ridership. Since opening in October 2002, it has served as many as 10,000 riders per day during large conventions. This success, coupled with the influx of capital into the downtown area, has also bolstered Tampa officials’ desire for a more comprehensive transit system that would link the city with its outlying commuter suburbs and to alleviate congestion on local roads and highways. Since the early 2000s, efforts have been underway to develop a regional public transit system serving Tampa and Hillsborough County. In May 2007, the Florida legislature approved the formation of the Tampa Bay Area Regional Transportation Authority, though support of the agency has been mixed. Gov. Charlie Crist vetoed $1 million in startup funds. However, local officials, including current Tampa Mayor Pam Iorio, had hoped that the authority will be the impetus needed to build the rail system for Tampa and Hillsborough, Pinellas and Pasco counties.