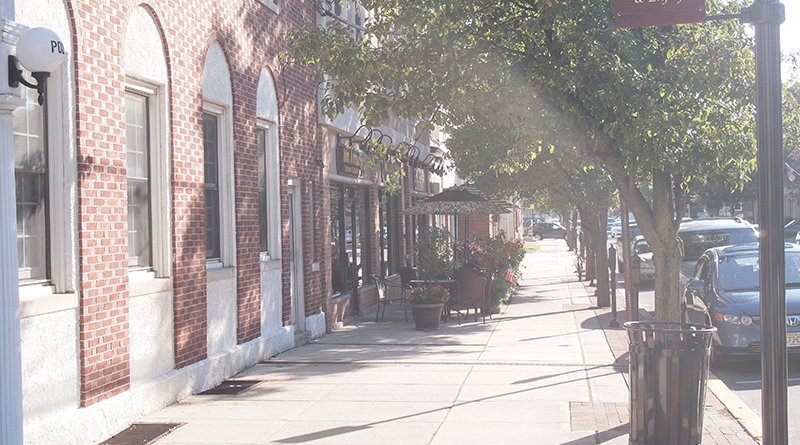 New Jersey’s 26th Transit Village, Dunellen, completed a two-year application effort and gained designation in 2012 by demonstrating that it has the necessary ingredients for success. Administered by the New Jersey Department of Transportation (NJDOT), the Transit Village Initiative provides funding opportunities for municipalities that demonstrate a commitment to transit-oriented development, which emphasizes dense, mixed use, pedestrian-friendly redevelopment within a half-mile of a municipality’s train station. Dunellen, a 1.05 square-mile Middlesex County community, is home to just 7,300 people and 2,700 housing units. Population has grown slowly but steadily over the past decade, adding about 500 new residents since 2003.

Situated on NJ TRANSIT’s Raritan Valley Line, 53 trains connect Dunellen with New York City every weekday. The trip lasts just over an hour. Riders traveling to New York Penn Station must change trains at Newark. Like many stations on the Raritan Valley Line, ridership at Dunellen has gradually increased over the last decade. Since 2002, average daily ridership has risen 8%, suggesting the growing appeal among residents and visitors of living near a train station, a situation on which the borough is now set to capitalize.

NJDOT is enthusiastic about Dunellen’s future station-area redevelopment. “The train station redevelopment projects will provide full access to the station by foot, bus, taxi, and bicycle, and handle the new shopping and housing opportunities anticipated through the anticipated growth in ridership,” says Susan Weber, the Supervising Transportation Analyst of the Transportation and Livable Communities section of Bureau of Statewide Strategies at NJDOT.

Although the Transit Village designation was a huge step toward Dunellen’s revitalization, it is, in a sense, only one of many for the borough. In early 2012, with anticipation of the Transit Village designation and with a goal of gaining Main Street New Jersey status, the borough created the Dunellen Downtown Management Organization. Its stated purpose is to “improve the economy, appearance, and image of our central business district through the organization of local citizens and resources.” The young organization is currently applying for grants to improve downtown aesthetics, working with local businesses to improve the appearance of storefronts, and developing a promotional brochure for the borough. These steps are vital for attracting residents, visitors, and businesses alike to a thriving downtown.

These recent steps advance a goal Dunellen set for itself in 2003 when the borough approved its Downtown Redevelopment Plan. The plan outlines future transit-oriented development initiatives around the train station and divides redevelopment into two phases. Redevelopment Area Phase One focuses on the immediate station area and the region south of the rail line, while Redevelopment Area Remainder covers the area to the north of the rail line. Combined, these two areas encompass the entire downtown commercial area and extend the width of the borough, from the border of Plainfield to the border of neighboring Middlesex. Two-thirds of it is currently zoned business that permits commercial, single family residential, and two-family residential uses. It surrounds and includes the train station, making it the ideal location for the borough’s Transit Village efforts. Both areas have been designated areas in need of redevelopment.

Redevelopment Area Phase One properties include the Dunellen Station and the adjacent former Art Color factory – a 19-acre site that currently houses warehouse and manufacturing spaces and a gym. The redevelopment plan for the area envisions municipal and civic buildings, commercial establishments, and structured parking. Redevelopment of the former Art Color factory calls for mixed use – ground floor commercial spaces and residences above. Directly south of the station lies a municipally-owned parking lot serving rail commuters and library patrons. The redevelopment plans for the parking lot call for mixed use commercial and residential development that incorporate structured parking.

Work on the second phase of redevelopment, the Redevelopment Area Remainder, is slated to begin after the completion of the first phase and will also be developed as mixed use.

While redevelopment of these properties has not yet begun, with a plan in place and Transit Village status achieved, Dunellen residents and officials are hopeful redevelopment will soon move forward. Given their long-term commitment to TOD, the borough is not likely to be idle while opportunities for revitalization and transit-oriented development exist.

July 21, 2007 Steph_Admin Comments Off on DVRPC Plans for Philadelphia TOD