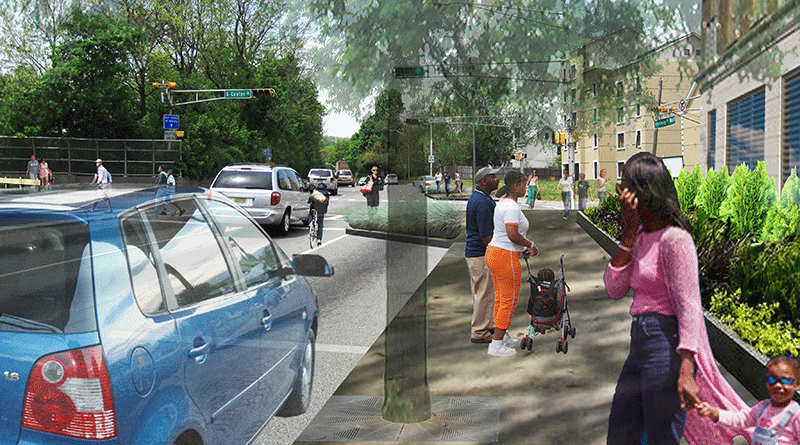 Thanks to Together North Jersey for the use of this article

On June 20th, on the 9th floor of NJ TRANSIT’s (NJT) Headquarters in downtown Newark, over 25 stakeholders came together to see the closing presentation of the “Inner M&E Strategic Corridor Plan.” That presentation concluded months of work done as part of one of Together North Jersey’s pilot Local Demonstration Projects (LDPs), and marked the official founding of the Urban Essex Coalition for Smart Growth: a coalition of multiple sectors and municipalities designed to advance transit-oriented and equitable development priorities in the region. The success of this project can serve as a model for how to leverage Together North Jersey (TNJ) to advance larger, regional goals and attract funding for continued work.

The intent of the project is to bring together neighboring communities – Orange, East Orange and Newark – to create a mutually beneficial strategic planning effort along the shared Inner Morris and Essex Rail Line (Inner M&E), Main Street and Route I-280 corridors. The project initially began in 2011 with NJT, working through its Transit Friendly Planning Program, engaging Orange and East Orange in a shared visioning project. For the Inner M&E LDP, the geographic reach of the planning area was extended from Highland Avenue Rail Station (on the border between Orange and West Orange) to the Broad Street Station neighborhood in Downtown Newark.

The next step was to create a corridor-wide coalition, the Urban Essex Coalition for Smart Growth (UECSG), and build consensus through community engagement on opportunities and priorities for the rail station neighborhoods. Once the community visions and market opportunities for the corridor were established, conceptual plans and an “action agenda” were created to frame the preferred direction to move forward.

One major goal of the LDP was to build upon existing efforts already taking place. By highlighting the existing work, it would become easier to make connections between projects and fill gaps by combining work being done elsewhere. The Coalition understands that while the study area is a single corridor, it is made up of many different neighborhoods, nodes and districts.

These districts and neighborhoods do have a lot in common, such as the fact that they are oriented around transit and face mobility challenges across I-280. The area also shares many assets and opportunities, such as large educational and medical centers (“Eds and Meds”) and a focus on the arts. There is also the benefit of having walkable neighborhoods and convenient transit connections to the Manhattan, Newark and Hoboken employment markets.

The presence of key “Eds and Meds” employers, especially in Newark, has helped bring in over $363 million in new investment over the past several years, mostly on the eastern end of the corridor (Newark). While East Orange and Orange have not seen as much institutional investment, there is ample opportunity. Housing prices and retail rents are significantly discounted from those of nearby cities, and the proximity to rail transit means the area is a prime target for future investment. Even if prices were to increase above historic levels, they could still provide an attractive discount compared to other cities. The key to providing pricing levels that are required for market rate construction is an improvement to the quality of life.

To make this improvement, the corridor plan suggests targeting nodes or “places” rather than individual buildings or an entire region. For example, in Orange’s Valley Arts District, much neighborhood planning and revitalization has already taken place. Luna Stage is located in the District, as are several artist live/work spaces, restaurants and community gardens. HANDS, Inc. is the community-based organization (CBO) responsible for much of this progress, but more needs to be done. HANDS, Inc. is also receiving a Together North Jersey NGO micro-grant to continue their streetscape design and revitalization work in the Arts District. You can read about their future plans in Together North Jersey’s NGO Grant Page.

Other focal areas include the “Tony Galento Plaza” area in Orange, the “Brick Church Plaza” node in East Orange, and the Lower Broadway Neighborhood to the north of Broad Street Station in Newark. The full report, which will be posted shortly at Together North Jersey, features these and other areas.

Three priorities were developed from the work, and within each priority, goals were split between expected implementation periods.

The first priority, to “Increase the Quality of Life & Increase Economic Development”, includes tasks such as finding groups to sponsor public events, establishing relationships with employers to understand their hiring needs, improving mobility and parking, and finding alternative uses for rail station buildings.

The second priority, to “Use Connectivity to Drive Economic Development”, focuses on improving north-south access and connections to rail. Proposed actions include adopting complete street plans, investigating bus access improvements, and mitigating access challenges for pedestrians and cyclists across Freeway Drive and I-280. Long term concepts include turning Freeway Drive, a street as welcoming to pedestrians as its name implies, into a “complete street,” with retail and pedestrian amenities. See the image at the end for an idea of what it could look like.

Finally, priority three, “Strengthen Connections to Opportunities”, includes analysis of existing transit service patterns to identify improvements. Concepts include having communities and key employers working to establish a bus shuttle loop to facilitate key connections and, in the longer term, advocating for improvements to rail services to Manhattan.

The stakeholders who worked together to develop this plan understand how important it is to ensure momentum, and that the ideas end up being implemented rather than sitting on a shelf. As mentioned earlier, thanks to the work done on the report, HANDS, Inc. secured a TNJ NGO micro-grant to move forward with some additional work. They weren’t alone: La Case de Don Pedro – another key CBO partner on this LDP – was also awarded a TNJ NGO grant to work on improving lighting under the I-280 ramps between the Lower Broadway neighborhood and the Newark Broad Street Station.

Another important “next step” is the formulation of a coalition including municipal and CBO members of the LDP Steering Committee to continue the work started with the LDP. This is a critical step, in that the coalition can work to institutionalize responsibilities, actions and initiatives. Moreover, Greater Newark and Jersey City LISC, one of the key project partners, has offered to dedicate funds to staff the newly formed Coalition. This will enable UECSG to have reach beyond the project scope, and to follow through on the priorities set forward in the LDP.

Finally, as is the case with each TNJ LDP, a state agency “Walk, Talk and Act” tour of the study area with the key Steering Committee members was held in early August. This tour introduced key state agency representatives to the shared vision of the municipalities and enable a meaningful dialogue and crucial follow up actions.

The Urban Essex Coalition for Smart Growth held a meeting of their Working Steering Committee for the first time on September 27th at the East Orange General Hospital, in East Orange, NJ.  The focus of the meeting was to discuss the organization and set priorities for the projects and initiatives that they hope to concentrate on during the next 12 months.
Items discussed at the meeting were:

An exciting update from that meeting was on the search to hire a coordinator to help support the work of the coalition. The position will be funded by LISC.