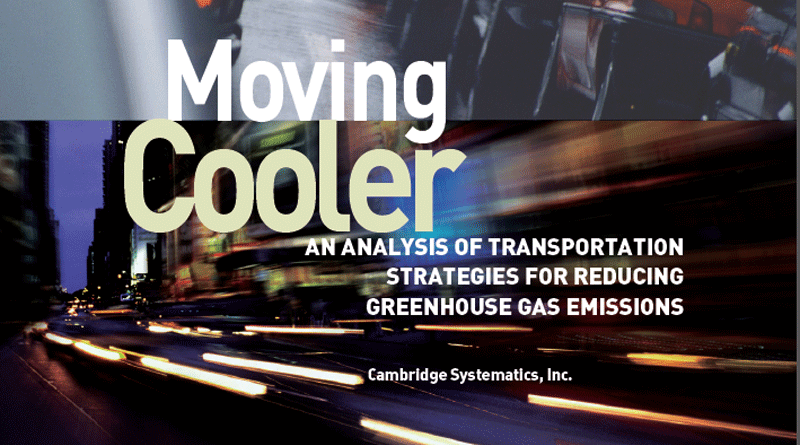 Energy-efficient vehicles and cleaner fuels alone will not solve the nation’s problem of reducing greenhouse gas emissions—the U.S. must also adopt policies that encourage compact development, reduce driving and expand mass transit use, in order to reduce greenhouse gas (GHG) emissions, according to Moving Cooler: An Analysis of Transportation Strategies for Reducing Greenhouse Gas Emissions, a report released by the Urban Land Institute. The stakes are high, because transportation accounts for roughly 28 percent of the country’s greenhouse gas emissions, and the sector has been one of the fastest-growing in the past two decades—representing nearly half of the nation’s total increase in GHG emissions since 1990.

Moving Cooler finds that the U.S. could cut greenhouse gas emissions by as much as 24 percent by 2050, without road pricing strategies, through a bundle of policies that would result in changes to current land use patterns, travel behavior, transportation systems and operations, and regulatory strategies. If pricing measures (such as pay-as-you-go driver’s insurance, direct fees for vehicle miles traveled, carbon pricing or increased gasoline tax were added) GHG emissions reductions could be as high as 41 to 52 percent. The report found environmental gains from advances in fuel efficiency would be mostly undermined by increased travel and population, making it important to address the efficiency of the transportation sector by investing in land-use planning, public transit, and other low-carbon alternatives.

According to the report’s authors, Cambridge Systematics, the particular approaches that would contribute most to greenhouse gas reductions are:

These approaches were also evaluated as part of one of nine categories of strategies. Land use strategies were found to produce the largest reduction in emissions of all 50 strategies over the long term. Other categories of strategies investigated were transportation pricing and taxes, public transportation improvements, non-motorized transport such as walking and biking, regulations to moderate vehicle use and speed, intelligent systems, expanded highway capacity and more efficient freight movement. The effectiveness of each strategy in cutting greenhouse gas emissions was measured against a baseline representing current trends.