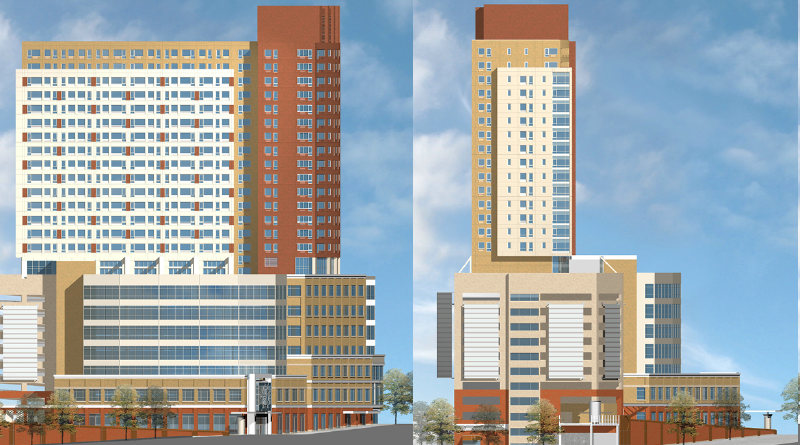 Development in downtown New Brunswick continues apace, despite the real estate market downturn. Two projects, in particular, deserve attention: the Gateway, a mixed-use, residential-over-retail building designed to connect to the train station, and the Cultural Center, a proposed mixed-use project that will provide new facilities for two of the city’s theaters, the George Street Playhouse and the nationally recognized African-American Crossroads Theatre.

As noted in the April 2007 newsletter the intent of the Gateway project is to take full advantage of the New Brunswick train station, located on the Northeast Corridor. The multi-use structure will combine a large commercial bookstore, other retail uses, a substantial residential component and structured parking. The bookstore would also serve as the main bookstore for Rutgers University. The building would be the tallest in the city, currently slated to rise 295 feet. A distinguishing feature of the new structure would be a pedestrian promenade connecting the university’s main thoroughfare, College Avenue, with the Trenton-bound station platform. The project has received all approvals, including one from the New Jersey Historic Preservation Office.

The project was proposed in 2005 and approved by New Brunswick the following year. The city determined that the station area was in need of redevelopment, allowing it to remove existing tenants. Several tenants sued the city and New Brunswick Development Corporation (DEVCO), asserting that the area, due to its functioning businesses and apartments, did not meet the definition of “blighted,” a requirement for designating an area in need of redevelopment. While the suit was in the courts, negotiations between tenants and the city continued and agreements were ultimately reached with all tenants. The last holdout, New Jersey Books, an independent bookseller, will move into a new 18,000-square foot space on Easton Avenue, less than a block from its former location. The new store will be located on a site vacated by a Rutgers warehouse and parking lot, and is scheduled to reopen at its new location before the start of the university’s fall semester.

Demolition on the Gateway site is set to begin before the end of the year. In a first for the company, DEVCO will act as developer of the residences, having secured financing from Fannie Mae. Units are to be aimed at moderate income buyers, with prices below $500,000.

Known for its health care and education sectors, New Brunswick’s revitalization also can be traced to the strength of its cultural institutions. The city’s cultural district, or “theater row,” features the NJ State Theatre, the George Street Playhouse (GSP) and the Crossroads Theater, all located along Livingston Avenue across from the newly completed Heldrich Hotel and a few short blocks from the train station. The Cultural Center redevelopment project is another new venture for DEVCO, one modeled on New York’s Carnegie Hall and Museum of Modern Art experiences. Financing for the Cultural Center would be achieved through the sale of air rights above the GSP and Crossroads; the funding would be used to provide new performance and rehearsal space for the theaters, as well as for the American Repertory Ballet, currently located in another downtown location. In addition to these cultural facilities that would connect to the historic State Theatre, plans call for a 300,000-square foot office tower, a residential tower, retail space and structured parking.

September 24, 2019 Stephanie DiPetrillo Comments Off on Phil Abramson: The Key to Transit-Oriented Development