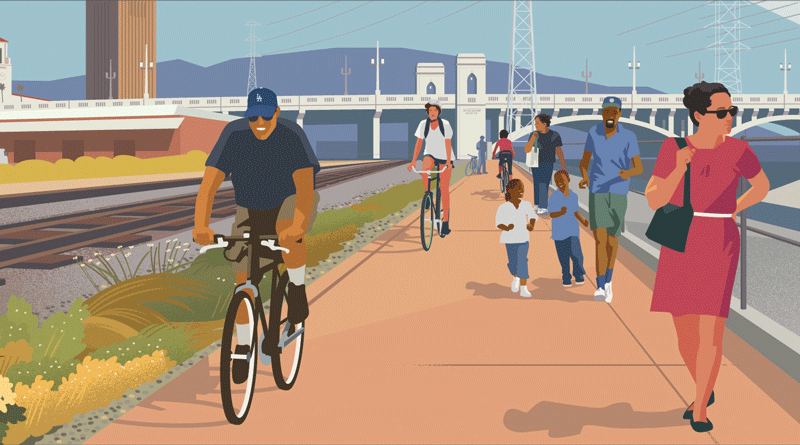 Artist’s rendering of the LA River Path project, one of the 28 transit projects being expedited for completion by 2028. Source: LA Metro

NJHMFA Tops Out Transit-Oriented Development in Essex County
Linda Lindner, NJBiz, April 29, 2019
The New Jersey Housing and Mortgage Finance Agency and The Alpert Group have topped out a mixed-income residential building in West Orange, adjacent to the Highland Avenue Station. The project comprises 45 market rate apartments, 55 units affordable at 60 percent of the Area Median Income (AMI), and seven units affordable to residents earning 30 percent AMI. NJ Future honored the project with a 2018 Smart Growth Award, noting its location on a former industrial brownfield site and its contribution to a major revitalization effort in downtown West Orange.

Mulberry Commons Grand Opening
Newark Community Economic Development Corporation, Press Release
The Mulberry Commons development project in Newark will be celebrating its grand opening on Tuesday, May 14 from 11 AM to 4 PM on Mulberry Street between Lafayette Street and Edison Place, across the street from the Prudential Center. The event will feature keynote speakers, a ribbon cutting, and a lineup of activities open to the general public, including to families with children. The development’s grand opening signifies the beginning of major revitalization work in the Newark-Penn Station neighborhood.

Dunellen: ‘If we don’t do this redevelopment, we’re going to have to merge in 20 years with Middlesex or Piscataway’
Bob Makin, Bridgewater Courier News, May 2, 2019
In an effort to rejuvenate the Borough’s tax base, Dunellen officials are working to redevelop the former Art Color factory site across the street from the Dunellen Station. The old factory is currently being demolished and will be replaced with luxury and affordable rental units, retail, and townhomes. The Dunellen Station project markets its proximity to local Dunellen businesses, schools, and transportation, and is anticipated to bring $20 million in tax revenue to the Borough in the 30 years following its completion in 2020.

Who killed Durham-Orange light rail? The answer may be more complicated than just Duke
Jake Satisky, The Chronicle, April 29, 2019
At the end of February 2019, Duke University sent a letter to GoTriangle stating it would not sign the cooperation agreement necessary to begin construction of the Durham-Orange Light Rail, effectively killing the project. However, Duke was not the only entity preventing the project from coming to fruition. State funding for the project was contingent on receiving federal funding by November 2019 and local funding by April 2019. Norfolk Southern and the North Carolina Railroad Company also had major concerns about the light rail alignment crossing existing tracks at Blackwell Street. Officials on the project are now considering other technological and transit options to repurpose the light rail plan and achieve a different solution for the region’s mass transportation challenges.

Mayor’s Green New Deal Calls on Angelenos to Drive 6 Fewer Miles Every Day
Elijah Chiland, Curbed Los Angeles, April 29, 2019
Los Angeles Mayor Eric Garcetti has announced LA’s version of the Green New Deal, centered on a goal of having half of city residents’ trips taken via non-automobile modes by the year 2035. This goal would reduce vehicle miles driven by 39 percent. The City is already working towards this objective by expediting 28 transit projects to be finished in time for the 2028 Summer Olympics. Additionally, LA Metro plans to test a congestion pricing system, and the mayor is encouraging incentives for electric vehicle purchases to reduce the City’s greenhouse gas emissions under the LA Green New Deal.

Playground ‘Deserts’ Plague NYC Neighborhoods
Amy Plitt, Curbed New York, April 29, 2019
The New York City Comptroller’s office has issued a report stating the City ranks 48th out of the 100 largest US cities in playgrounds per capita, with only 2.4 playgrounds for every 10,000 residents. The report recommends a “pavement to playgrounds” solution to address scarcity and to turn off-grid blocks and dead ends into playgrounds and community gathering places. Advocacy groups believe this model would allow the 17 square miles in the City dedicated to car parking and storage to be repurposed; this would help orient streets around people, rather than cars.

The Newest Hot Coworking Space Costs Just $2.25 an Hour, Because It Is a Parking Spot
Eillie Anzilotti, Fast Company, April 30, 2019
A new coworking initiative called WePark hosted its first pop-up event on Monday, April 29 in front of Civic Center in downtown San Francisco as a protest against the high membership fees charged by coworking spaces. The organization set up tables and chairs in empty metered parking spaces and paid the hourly meter fee while working within walking distance of restrooms, charging stations, and other amenities typically offered in a coworking space. The group was joined by activists protesting the amount of street space taken up by San Francisco’s 275,000 parking stalls. People in other US cities have reached out to the San Francisco organizers to learn about starting their own version of the program.

Even Transit-Oriented Development Can’t Stop the Ridership Drop
Jarred Schenke, Bisnow Atlanta, May 2, 2019
Average daily ridership at the MARTA Dunwoody Station dropped by almost 25 percent between 2015 and 2018, even with the new office campus of State Farm insurance operating above the station. The total population of Atlanta is growing rapidly and is projected to reach 2.5 million people by 2040, but ridership of the MARTA system continues to decline due to low fuel prices, cheap car loans, easy access to ride-sharing services, and poor upkeep of bus shelters that discourages passengers from riding the buses. However, part of the ridership decline can be attributed to an increase in telecommuting, and more companies are subsidizing monthly MARTA passes for their employees, indicating a steady demand for public transit services by Atlanta-based companies.

It’s a Few Years Late, but Denver’s New Train is Here
Sarah Holder, CityLab, May 2, 2019
Denver’s new commuter rail line, known as the Gold Line, opened on the last weekend of April and provides service from the Denver suburb of Wheat Ridge to Denver Union Station. The new line supplements the 8th largest rail system in the US, and many of its stations are already experiencing surges of residential and commercial development. Existing businesses along the line, such as those in Olde Town Arvada, are benefitting from an influx of visitors, especially in the first few weeks of operation—passengers can ride for free until May 11.

Official Unveiling of the Candiac Station TOD Project
Ville de Candiac Press Release, Cision in Canada, April 29, 2019
The City of Candiac and the Montreal Metropolitan Community have released details about the Candiac TOD project, built around the Candiac commuter rail station that provides service to downtown Montreal. The project will be one of the first in the area to demonstrate smart growth principles laid out in the Metropolitan Land Use and Development Plan, including sustainability, social equity, and economic development. It will include 3,000 housing units, retail and office space, 14.5 acres of green space, and a border of pedestrian and bike paths.