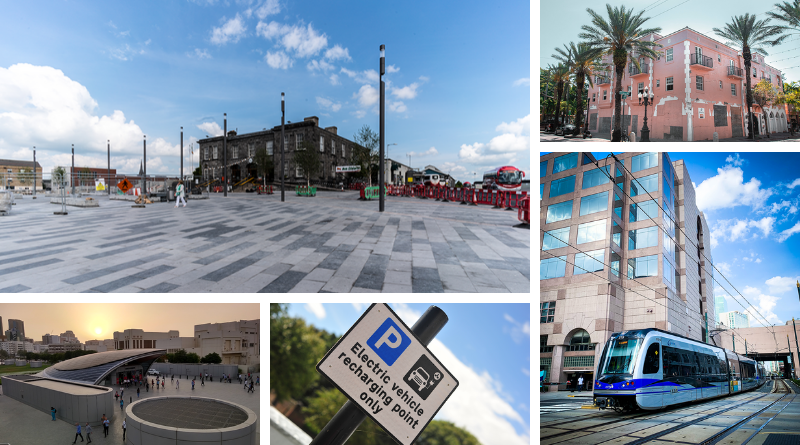 West Orange Council Greenlights Plan, PILOT For Executive Drive
Eric Kiefer, Patch.com, December 30, 2019
On December 18, the West Orange Town Council approved three resolutions and an ordinance for a redevelopment project on Executive Drive. A 30-year payment in lieu of taxes (PILOT) agreement will pave the way for the demolition of two office buildings and the development of a 425-unit apartment complex, 64 of which are allocated for affordable housing.

Key Day for Jump-Starting NJ’s Transition to Electric Vehicles
Tom Johnson, New Jersey Spotlight, January 6, 2020
On Monday, clean car advocates and law makers presented a bill proposing to electrify New Jersey’s transit sector in compliance with state laws to reduce carbon pollution by 2050. The legislation sets targets for the transition to electric vehicles (EV) over the next decade, including increased availability of EV charging stations, rebates for the purchase of plug-in electric vehicles, and the electrification of the state’s bus fleets by 2035.

New Affordable Housing Planned for Prime Lincoln Square Corner Raises Parking Concerns
Alex V. Hernandez, Block Club Chicago, January 7, 2020
A proposed affordable housing development to be built on a city-owned parking lot in Lincoln Square is causing concern for some in the neighborhood. The nonprofit firm, Community Builders, wants to build at 4715 N. Western Ave, north of the Brown Line station. The corner building would be six-stories on one side but only three along Leland Ave and would include public parking. If completed, the mixed-income building would include a total of 42 one- and two-bedroom apartments with a portion reserved for those who earn between 30 and 80 percent of the area median income. The developer is seeking a zoning change and designation as a TOD due to proximity to the Brown Line stop and several bus stops.

Newark Creates Transportation Improvement District
Josh Shannon, Newark Post Online, January 8, 2020
Developers building in Newark, Delaware will soon be required to contribute to the cost of transportation improvements needed to accommodate traffic generated by their projects. On Monday, the Newark City Council approved an agreement with the Delaware Department of Transportation to create a transportation improvement district (TID), the first step needed to study and develop a fee structure for new development projects. Current rules stipulate that developers must commission a traffic impact study and pay for any needed road upgrades when projects are anticipated to generate 500 trips per day or 50 trips per hour, a threshold not met by any recent projects in the city of nearly 30,000. A TID however would study transportation needs holistically, and require that all developers pay their share based on the size and type of their project.

SCIDpda Receives $11 Million from the City of Seattle to Fund Affordable Housing Project in Beacon Hill
Lily Hansen, The International Examiner, January 8, 2020
The Seattle Office of Housing has awarded the Seattle Chinatown International District Preservation and Development Authority (SCIDpda) $11 million to fund the construction of 154 affordable housing units on the current northern parking lot of the Pacific Medical Tower in Beacon Hill. This grant is part of Mayor Jenny Durkan’s effort to invest a record $110 million in affordable housing in 2019. SCIDpda is one of thirteen organizations to receive resources from the fund, which will support the creation of a total of 1,944 new and redeveloped affordable housing units in neighborhoods throughout the city. The North Lot Campus project will mostly comprise two- to four-bedroom units and will include a 10,000 square-foot child care facility and a 24,000 square-foot elder care center. The project will also receive $2.5 million from the King County Transit Oriented Development fund and $9 million from the State Capital Budget.

Small-Scale Urban Developments Starting to Sprout. Thank a Change in the Parking Code
Rebecca San Juan, The Miami Herald, January 8, 2020
In 2015, the City of Miami took a dramatic step to spur redevelopment efforts by removing a zoning condition that required 1.5 parking spaces per apartment in new buildings covering less than 10,000 square feet. Since then, more than 10 smaller-scale rental buildings have been built or are in development. Lot sizes for these infill projects are typically about 5,000 square feet. Several have cropped up in Little Havana, a neighborhood of two- and three-story structures.

U.S. Cities Vowed to Have More Mass Transit by 2020. Most Are Still Waiting.
Cameron Sperance, Bisnow Boston, January 9, 2020
For many, 2020 is a benchmark for when many cities were to have transit plans and improvements moving well along towards implementation. But growing metro regions such as Austin, Columbus, and Nashville have yet to see these plans come to fruition and are still coping with traffic congestion and other constraints. In places such as Boston and Charlotte, transit (long-existing and newly-built) has been providing an anchor for new development that others envy. What’s more, real estate professionals have taken notice of this lack of movement on new transit services; the most recent Counselors of Real Estate survey ranks infrastructure as the top issue facing the industry.

UNITED ARAB EMIRATES — One of Dubai’s Busiest Metro Stations Set for Major Transformation
Gavin Gibbon, Arabian Business, January 6, 2020
Dubai’s Roads and Transportation Authority (RTA) has requested proposals for the Union 71 TOD project above the Union Metro Station, as well as the Saahat Deira project less than a half-mile away. The main Union 71 project will include a mix of commercial, residential, and retail units directly above and adjacent to the metro station, while the Saahat Deira project will create a rooftop entertainment plaza and parking garage. Bidders will be shortlisted based partially on their revenue plans for increasing the income to RTA through the TOD.

INDONESIA — Transportation Ministry Plans Land Auction for Transit-Oriented Developments
Riska Rahman, The Jakarta Post, January 10, 2020
Indonesia’s Transportation Ministry (TM) has announced it will auction off publicly-owned land around public transit sites to developers to facilitate the creation of TOD projects. The TM’s goal is to increase the number of people who take public transit in and out of Jakarta from 25 to 60 percent. The auction will focus particularly on light rail transit sites, which have historically been underutilized compared to sites near other modes of transit.

IRELAND — Development of 10,000 Home Scheme Moves a Step Closer in Limerick
Peter Hamilton, The Irish Times, January 10, 2020
The state-sponsored Land Development Agency (LDA) recently outlined plans for the development of a €2 billion project that could result in 10,000 homes in the City of Limerick. The LDA signed a memorandum of understanding with Limerick City and County Council, the Health and Safety Executive agency (HSE), and Córas Iompair Éireann (Irish Transport System) to create a master plan for the 123-acre (50-hectare) brownfield site located at the city’s Colbert Station. The station recently received a €3.5 million investment in the first phase of a €17 million renovation project. The station serves 1.1 million rail passengers per year and is also the city’s hub for Bus Éireann.