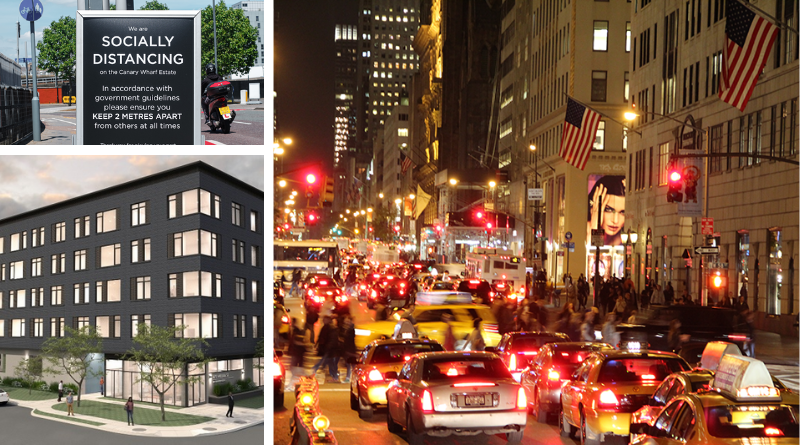 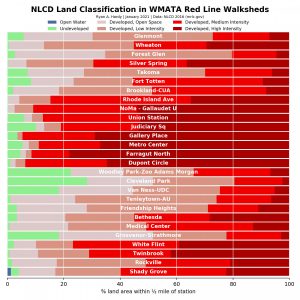 Often overlooked among tools in planning, remote sensing data products can inform planning decisions and provide insights on growth patterns. Analysis drawing on the National Land Cover Database (NLCD) dataset can track development near rapid transit corridors, information that can be used to enable growth and contain sprawl. Such analysis, used in Montgomery County in Maryland, identified that the land near the METRO Red Line has been constrained by zoning and not fully utilized. High and medium-density development was found to correlate negatively with the total area zoned for single-family housing. The research also indicated there is more room for TOD near the METRO Purple Line as the surrounding land is less developed. In December 2020, the County proposed an amendment to its county zoning code to relax restrictions on higher-density development along the Red Line. This bill may help stem the growth of single-family housing and provide accommodation along transit corridors.

CANADA—Why 15-Minute Neighbourhoods May Be More Popular Now Than Ever
Osler Hoskin & Harcourt LLP, Lexology®, January 12 2021
Citing the impact of the COVID-19 pandemic, this short essay explores the nature of and the rising interest in “15-minute” neighborhoods, places where essential needs can be met a close distance from one’s home and accessed on foot or bike. Similar to, and in some manner, tied to transit-oriented development, 15-minute neighborhoods have the potential to reduce dependency on private vehicles, reduce traffic congestion and carbon emissions, and improve quality of life.

The Pandemic Doesn’t Have to be an Existential Threat to Mass Transit
Jake Blumgart, City Monitor, January 12, 2021
While most other countries express confidence in their transportation systems’ continued operation and financing, the situation in the US stands in stark contrast. Across the country, transit agencies have already reduced service and workforce, and transit advocates fear a bleak future given the havoc that the pandemic continues to wreak. Additionally, the increasing favorability of teleworking, second and third waves of the virus surge, and an uncertain and divided political climate may contribute to the slow recovery that has become characteristic for transit systems globally.

PENNSYLVANIA—SEPTA to Get $252 Million in Additional Federal COVID-19 Relief
Patricia Madej, The Philadelphia Inquirer, January 12, 2021
The Federal Transit Administration recently announced a $14 billion relief package to help public transportation agencies, although transit agencies and advocates had pushed for $32 billion as the pandemic continues to rage and revenues have fallen. SEPTA is set to receive $252 million in additional federal relief to stem losses. However, with ridership down 65 percent on transit and 85 percent on regional rail, the authorities claim that SEPTA might still see service cuts, layoffs, and fare increases soon unless solutions to long-term financial challenges can be identified.

What’s in store for the future of commuting?
Marian Jones, GreenBiz, January 12, 2021
During the pandemic, environmental researchers have seen unprecedented low-carbon levels—due in large part to the 42 percent of the U.S. workforce who are working from home full-time. This workplace trend is likely to continue, though climate scientists worry that the associated environmental benefits may not. While many businesses have adopted permanent work from home policies for at least some of their employees, others such as the New York Stock Exchange and Bloomberg Media have encouraged employees to drive private vehicles to work by providing reimbursements. This, coupled with ongoing trepidation regarding use of public transit, encourage greater private vehicle use and increased climate impacts in the future.

CALIFORNIA—COVID: Powerful Ultra Violet Lights Installed on SMART Trains to Kill Coronavirus
Don Ford, CBS SF Bay Area, January 11, 2021
The Sonoma-Marin Area Rail Transit (SMART) will use powerful ultraviolet lights in its new filter systems. Although widely used in hospitals and water treatment plants, the application of this technique in train ventilation systems is new. SMART Communication and Marketing Manager Matt Stevens believes that this new filtration system will kill several kinds of pathogens, not just the COVID-19 virus. Like the Bay Area Rapid Transit (BART), other agencies are still in the testing and evaluation phase, but SMART aims to have these filters installed on all trains by March—making it one of the first in the nation to use UV in this manner.

New Jersey to Receive $1.4 Billion in Public Transit Funds from Latest Stimulus Bill
Colleen Wilson, NorthJersey.com, January 12, 2021
Of the latest $900 billion federal stimulus funding package, more than $1.4 billion has been designated for transit projects in New Jersey. This amount is similar to that received through the CARES Act, and most will likely go to NJ TRANSIT, the statewide transit agency. Some of the funds will offset the drop in fare revenues due to low ridership. NJ TRANSIT relies heavily on rider fares with about 40 percent of revenues coming from this source. The agency anticipates drops in other revenue sources such as advertising and state subsidies.

Parkview Funds $12M Construction Loan
Real Estate Weekly, January 12, 2021
Parkview Financial has provided a $12 million loan to KW Contracting Construction Corp. for the development of the Legacy, a 51-unit apartment complex in Orange. When complete, the project will comprise a mix of one and two-bedroom units in a five-story structure and offer residents Zipcar access. The 0.43-acre site is located within a designated NJ Transit Village and is in walking distance of the Orange Station, which offers 35 minute rides to New York Penn Station. The project is expected to be completed by summer 2022.

PEEK Properties Launches Leasing at 39-Unit Apartment Building in East Orange
Joshua Burd, Real Estate NJ, January 8, 2021
Peek Properties has begun leasing at its new 39-unit apartment building in East Orange, offering a mix of one and two-bedroom units. Managing partner Phillip J. Evanski noted that the property is contributing to downtown revitalization by replacing a vacant building at a time when demand for apartment rentals in the suburbs is on the rise. The property is located three blocks from NJ TRANSIT’s Brick Church station and one block from many prominent local, regional and national retailers.

NEW YORK—State of the State: Cuomo’s Midtown Manhattan Transit Hub Vision Expands But Light on Details
Colleen Wilson, lohud, January 14, 2021
New York Governor Andrew Cuomo unveiled his vision for a $306 billion statewide infrastructure plan in his State of the State address. Plans include renovations and expansion of New York Penn Station and Port Authority Bus Terminal, an expanded High Line walking path, and green spaces on Pier 76. However, some have observed that these plans are not new, and that details on the status of these projects are still missing. Cuomo cited the pandemic as a reason for the delay in the review of these plans. Moreover, the Port Authority of New York and New Jersey warns that the drop in ridership may hamper progress on the bus terminal project.

TEXAS—Carrollton Office Project Would Kick Off Mixed-Use Development
Steve Brown, The Dallas Morning News, January 13, 2021
Developers hope to make significant progress on the first phase of the 25-acre TOD project in Carrollton, starting with a 125,000 sq. ft. office building at Trinity Mills Station. The project will eventually include two or more additional office buildings, apartments, retail space, and a hotel, as well as a park near the transit station. Koa Partners, with its partner, the Atlanta-based Integral Group, hopes to begin many projects in the Dallas area in 2021. This office building is scheduled to be completed by 2022.

INDIA—RLDA to Conduct Virtual Roadshows of NDLS Station Project with Investors
MENAFN, January 15, 2021
The Rail Land Development Authority (RLDA) plans to conduct roadshows for six days to discuss the project concept and proposals of the New Delhi Railway Station (NDLS) with investors and developers. Its objective is to engage with international real estate developers, infrastructure planners, and financial institutions from Europe, Australia, and South Asia. The flagship project is located at the heart of the capital, close to the city’s most prominent commercial district, and connected to all transit systems. The Master Plan area is approximately 120 hectares and will be developed with new-age amenities. The project will be a multi-modal hub for transport integration and development and will be the first TOD concept to be undertaken in the Delhi National Capital Region.