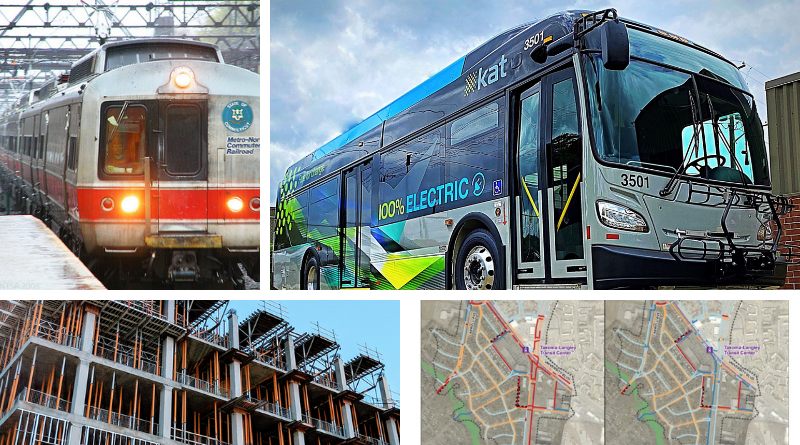 As Sound Transit finalizes the route for the West Seattle-Ballard light rail extension, board members weighed the pros and cons of a tunnel route to minimize short-term construction impacts and provide transit riders with easier access to elevated routes. The construction impact of some alternatives may be reduced by moving the station to the edge of the community or deep underground, while other alternatives offer better transit connections or the potential for transit-oriented development. Seattle Subway, a transit advocacy group, hopes to persuade the agency to revive an old, proposed route that would deliver riders closer to the core of the neighborhood. According to the group, directing the route through the heart of the city rather than the periphery will encourage more riders and stimulate denser urban growth.

Public Transit Gets $3.7B to Woo Riders, Adopt Green Fleets
Hope Yen, The Sun Chronicle, March 7, 2022
The Biden administration will provide $2.2 billion in coronavirus relief funds from the U.S. rescue package to 35 transit agencies in 18 states. The funds will help financially troubled transit agencies stay afloat and invest in new electric bus fleets and will support day-to-day operations, including staffing and payroll, as well as cleaning and sanitization. In addition, transit agencies will receive $1.5 billion in grants — a total of $7.5 billion over five years — to buy low-emission buses and build bus facilities. Among the recipients of COVID-19 relief funds are New York City’s Metropolitan Transportation Authority (MTA), which will receive $769 million to stabilize its operations, and San Francisco’s Bay Area Rapid Transit (BART), which will receive $270 million to bolster service and safety protocols.

NEW JERSEY—NJ Transit to Get a Promised $75M in COVID Relief From Deal with MTA
Larry Higgs, NJ.com, March 7, 2022
NJ TRANSIT will benefit from the $2.2 billion federal COVID-19 transit grants. Under a November 9, 2021, settlement between New Jersey, New York and Connecticut, the agency will receive $75 million from funds awarded to the NY Metropolitan Transportation Authority (MTA). According to the agreement, $14 billion in grants from the Coronavirus Response and Relief Supplemental Appropriations Act (CRRSAA) and the American Rescue Plan Act (ARPA) sent $10.85 billion to New York, $2.66 billion to New Jersey, and $474 million to Connecticut. The funding compensates agencies for revenue losses from declining ridership due to the pandemic.

NJ Affordable Housing Could See $300M Infusion Under Murphy Budget Proposal
Ashley Balcerzak, NorthJersey.com, March 8, 2022
Gov. Phil Murphy announced the State will use $305 million in federal funds to support affordable housing projects that could result in the construction of a total of 3,300 units. The New Jersey Housing and Mortgage Finance Agency (NJHFMA) will use the funds as gap financing, and leverage the funds with the 4 percent low-income housing tax credit. Together these programs could spur as much as $1 billion in new affordable housing projects. Supporting affordable housing adds stability to communities and satisfies the requirement, per the Mount Laurel decisions, for municipalities to provide a “fair share” of the new housing to low- and moderate-income families.

BELLEVILLE—Belleville to Receive $290K Grant from Safe Streets to Transit Program
Yael Katzwer, Essex News Daily, March 6, 2022
Belleville will receive $290,000 for its pedestrian safety program under the Safe Streets to Transit program. The township will use the funds to upgrade two pedestrian corridors on Belmont Avenue and Franklin Street that lead to the Silver Lake light rail station. The township sought the grant as it anticipates an increase in light rail ridership when the mixed-use complex on Belmont Avenue is completed. That project will add 232 new residential units to the area.

ORANGE—Orange to Receive $570K Grant from Safe Streets to Transit Program
Yael Katzwer, Essex News Daily, March 5, 2022
The City of Orange will receive a $570,000 grant from the Safe Streets Transit program for improvements to the Orange Transit Station underpass and to Railroad Plaza. Keith Royster, Orange’s spokesperson, said that the first phase of the project will address both sides of the intersection at Main Street and South Essex Avenue, while the second phase will address needed improvements at the intersection of South Essex Avenue and Railroad Place. “The proposed scope of work will result in a safer project area, encouraging the increased use of public transportation as a more accommodating alternative to vehicular travel within the City of Orange Township,” he added.

Redlining Means 45 Million Americans are Breathing Dirtier Air, 50 Years After It Ended
Daryl Fears, The Washington Post, March 9, 2022
According to a report published in the journal Environmental Science and Technology Letters, 45 million Americans are breathing dirtier air today due to decades of federal housing discrimination. Compared to Whites, more Blacks and Latinos live in areas that experienced redlining—a discriminatory practice in which financial and other services were withheld from potential customers who resided in predominantly minority neighborhoods that were deemed “hazardous” to investment. These neighborhoods continue to experience high levels of air pollution, which makes residents more vulnerable to pollution-related health hazards.

TEXAS—Council Approves Anti-Displacement Funding for Year Two of Project Connect
Kali Bramble, Austin Monitor, March 7, 2022
The Austin City Council voted to approve $41 million in anti-displacement funds as the City gears up for Project Connect, a public transit proposal approved in 2020. Introduced by council member Ann Kitchen, the resolution pledges $21 million for a housing development assistance program, the use of which requires that the investment is within one mile of a planned transit line. The remaining $20 million will fund community-led anti-displacement initiatives currently under development. With Project Connect’s $300 million in anti-displacement funds, the process of bringing more affordable housing along transit corridors began last year with a $23 million investment in land acquisition programs. 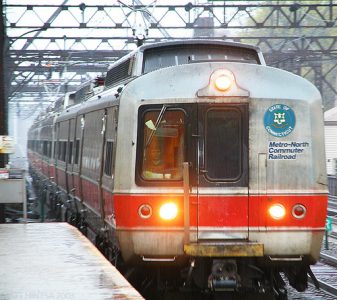 CONNECTICUT—Experts Push for CT to Return to its Transit-Oriented Development Roots
Josh LaBella, CT Insider, March 10, 2022
Planning experts noted Connecticut’s past—its 20th-century transit-oriented development history—as a model for addressing the State’s growing housing crisis. Citing projects at 665 Commerce Drive and 1401 Kings Highway, Mark Barnhart, Fairfield’s Director of the Office of Community and Economic Development said that the 260 new apartments and $1.6 million in tax revenue reflected a positive market response to transit-oriented development. In addition, Peter Harrison, the Director of Desegregate Connecticut pointed to zoning laws as the primary cause for the housing crisis. Speakers urged an increase in high-density mixed-use development through adjustments to land-use policies and zoning regulations for the areas around the train stations.

CALIFORNIA—Transit-Oriented Project Proposed Near College Boulevard Sprinter Station
Phil Diehl, The San Diego Union Tribune, March 8, 2022
Representatives of Ocean Trolley Place LLC will meet with the city Planning Department to discuss the details of a transit-oriented development project on a vacant property near College Boulevard Sprinter Station at the Western end of Olive Drive. The region near the Sprinter Station is designated as a “Smart Growth” opportunity area, an effort to increase public transit ridership and in turn reduce traffic congestion. Plans call for the construction of 140-150 homes, some of which will be single-family structures.

COLORADO—MGL Partners Secures $95M Financing for Suburban Denver Project
Olivia Bunescu, Multi-Housing News, March 8, 2022
MGL Partners has secured $95 million in equity and construction financing to develop the Fitzsimons Apartments in Aurora, Colorado. The 11.4-acre complex will include 355 units in eight buildings. The transit-oriented development at E. 13th Avenue and Peoria Street is 0.3 miles from the Rt. 15 bus line with direct service to Denver’s Union Station and is adjacent to a stop on the RTD 121 bus, which connects to the A Line at Peoria Station.

NEW YORK—PANYNJ, Others Seek LGA Connection
David Peter Alan, Railway Age, March 4, 2022
PANYNJ has proposed several options for LaGuardia AirTrain—the 1.5-mile, $2 billion project to build a rail link in eastern Queens that is on hold by order of Gov. Kathy Hochul. The PANYNJ specified 13 alternatives to the previous plan favored by Andrew Cuomo. The alternatives include five bus options, seven rail options, and one ferry/bus option. Of the five bus options, three would have dedicated bus lanes, and the remaining two would use existing routes. The ferry/bus option would leave from Pier 11 in Lower Manhattan, reach northern Queens via the East River, and connect with airport shuttle buses. Five of the rail options would rely on building a new light rail line, a mode that has been proposed for the city. The other two proposals call for extending existing subway lines.

CANADA—78% of Vancouver Residents Calling for More Housing Options and Density: Survey
Kenneth Chan, Urbanized, March 8, 2022
The City of Vancouver’s most recent survey of the public found that the 78 percent of respondents saw a need for new housing options, especially in low-density areas. This finding comes as the City faces a housing affordability crisis. The survey also found that more than 80 percent of residents support the construction of low-rise apartments (up to six stories) and townhouses in areas in neighborhoods where detached homes dominate. Regarding improving transit-oriented development by increasing housing near public transit services, 57 percent of the respondents preferred to “spread out density”’ away from the transit station, and about a third supported buildings taller than twelve stories near rapid transit stations. Feedback from the survey will be used to finalize the draft Vancouver Plan in April 2022. Following a final round of public input, the Vancouver City Council will review and vote on the plan in June 2022.

INDIA—L&T Business Park in Faridabad Packed with Vibrant Design, Calm Environment to Boost Productivity
The Economic Times, March 8, 2022
Faridabad is among the 100 cities that will be developed as “Smart Cities” by the Government of India. The City’s connectivity to other areas of the Nation Capital Region (NCR) has been cited as a reason for encouraging transit oriented development, particularly at multiple nodes along the metro route of Faridabad. One of the projects underway is a business park along the Delhi-Mathura Road, a few minutes’ walk from the Sarai Metro Station.