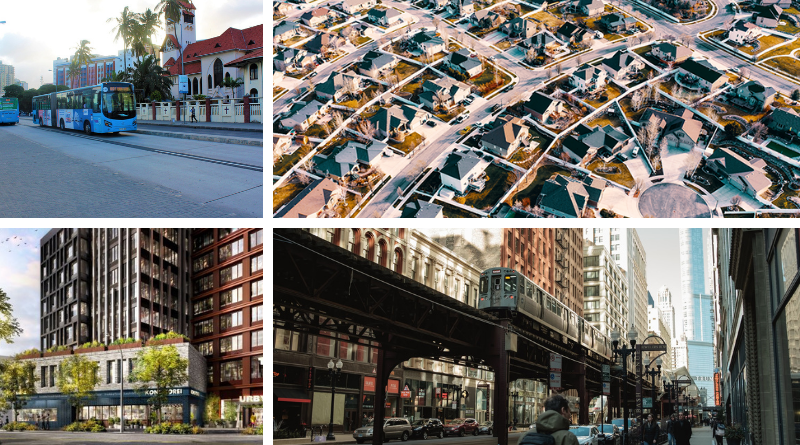 Suburban Design is a Tragedy of the Commons
Devon Zuegel, Strong Towns, May 3, 2022

Even if everyone in a neighborhood wishes for more density and easy access to amenities, the sum of every resident’s desire for more space pushes the market toward larger homes, leading to undersupply of dense urban communities. Urban density is characterized as a tragedy of the commons and is one of the primary reasons for suburban sprawl. Relaxing parking requirements for buildings and reclaiming public land on the street by displacing on-street parking are examples of ways to increase access without sacrificing space, writes Devon Zuegel.

NEW HAMPSHIRE—Covid-Related Grants to Fund Transportation Improvements in Rural Areas
Kelly Burch, Granite State News Collaborative/nhbr.com, May 18, 2022
New Hampshire will utilize a grant from the Centers for Disease Control and Prevention (CDC) to improve accessibility of public and community transportation systems. Last year, the CDC awarded the State more than $24 million in funds to address pandemic-related health inequalities, of which $3 million is allocated specifically for rural transportation improvements. The funding will be primarily used to create full-time mobility management posts at the state level and in each of the nine Regional Coordinating Councils (RCCs) in charge of local transportation. The CDC funding also provides $390,000 for transportation initiatives in five rural areas. Sullivan County used the funds to restore a program that offers free bus passes to Medicaid-eligible persons.

JERSEY CITY—US $88M Loan Secured for Journal Square Urby Project in New Jersey, USA
Barbara Mangiri, Construction Review Online, May 19, 2022
JLL Capital Markets secured $88.34 million in non-recourse construction-to-perm financing for the construction of Journal Square Urby, a 317-unit, high-rise multi-housing development. Located at 532 Summit Ave in Jersey City’s Journal Square neighborhood, the property will feature a mix of studio, one-, two- and three-bedroom units. Residents will be able to reach Midtown Manhattan in about 22 minutes and the New York City Financial District in about 18 minutes via the PATH.

NEWARK—‘Affordable’ Isn’t Affordable: Newark’s Plan To Create More Housing
Eric Kiefer, Patch-Newark, May 18, 2022
Newark Mayor Ras Baraka and other community leaders gathered to provide an update on the Affordable Newark project, a $20 million housing initiative targeting Newark families earning 30 percent of the area median income (AMI) for a family of four. According to Baraka, 59 percent of all Newark renters are “cost-burdened,” spending more than a third of their income on housing. The Affordable Newark project aims to bridge the gap and has funded a total of 196 units since its announcement last year.

ILLINOIS—Efforts to Make Transit-Oriented Development Equitable Starting to Pay Off, Chicago Officials Say
Heather Cherone, WTTW, May 19, 2022
Planning policies encouraging transit-oriented affordable housing projects are proving to be successful in preventing long-time residents of Chicago’s Northwest Side from being displaced. An apartment complex near the CTA Blue Line Logan Square Station will feature all 100 units earmarked for low- and moderate-income families. Two transit-oriented buildings along the CTA Green Line are planned for the City’s South Side: 43 Green in Bronzeville will comprise 99 units with 55 units set aside for low- and moderate-income residents, while a 56-unit complex near the Cottage Grove Station will offer 40 units for low- and moderate-income Chicagoans. Housing Commissioner Marisa Novara said the effort to prevent gentrification on the Northwest Side is at a key juncture, and that all three projects are the kind envisioned by the City’s Equitable Transit-Oriented Development (eTOD) policy. 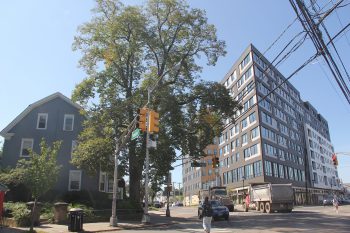 Housing Affordability in Transit-Oriented Developments
The Edge: Online Magazine of HUD’s Office of Policy Development and Research (PDR), May 17, 2022
While transit-oriented developments (TODs) provide access to high-quality transit and lower transport costs for those who ride transit , many TODs often increase housing costs and inadequately serve lower-income residents who rely on public transit and who have the most to gain from its cost savings. Recent studies by University of Utah researchers Reid Ewing and Justyna Kaniewska found that data indicate that TODs insufficiently housed people dependent on public transportation, and that few policies specifically prioritized affordable housing production in TODs.

Voi Technology Releases New Report Identifying Solutions to Increase Gender Equity in E-scooter Usage
Intelligent Transport, May 16, 2022
European micro-mobility operator Voi Technology, working with British non-profit Women in Transport, surveyed nearly 500 women and held five focus groups to learn how to better promote gender equality in e-scooter usage and that of other micro-mobility modes. The findings included that nearly four out of five respondents did not feel safe due to inadequate infrastructure for riding. While 90 percent of respondents strongly agreed that they were confident riding a scooter during the day, only 64 percent felt confident while riding at night.

GEORGIA—Transit-Oriented Development Opens Adjacent to King Memorial Station
Collin Kelley, Reporter Newspaper, May 18, 2022
A ribbon-cutting ceremony hosted by MARTA will mark the opening of Marchon, a mixed-use development adjacent to King Memorial Station. The transit-oriented building will comprise 305 dwelling units and 11,000 sq. ft. of office and retail space. One-third of the housing units will be designated “affordable” and available through the Workforce Housing Program, with rentals ranging from $1,350 for studios to $1,736 for two bedrooms. Marchon sits on 4.4 acres of former rail station parking lots and includes an extensive art activation in the Grant Street tunnel facilitated by MARTA’s public art program, Artbound.

CONNECTICUT—State to Provide $6M to Redevelop Area Near South Norwalk Train Station
Justin McGown, Westcheser & Fairfield County Business Journals, May 16, 2022
Connecticut Gov. Ned Lamont announced a new public-private partnership between the City of Norwalk and Spinnaker Realty at a recent press event held at the South Norwalk Train Station. The partnership will advance the second phase of a three-phase project adjacent to the station. When complete, the project will result in 450 housing units of which 45 will be affordable. Norwalk will receive $6 million for the development from the CT Communities Challenge Grant program, which funds transit-oriented development, downtown/major hub development, essential infrastructure, housing, and mobility and  public space improvements.

MASSACHUSETTS—Transit-Oriented Development Proposed for Salem
Alena Kuzub, Itemlive.com, May 16, 2022
WinnCompanies has submitted a proposal to the Salem Planning Board to build a 120-unit mixed-income, transit-oriented apartment community near the Salem MBTA station. The proposed building, named The Exchange Salem, represents phase one of a larger development project and would replace the municipal parking lot at 252 Bridge Street. The second phase of the project involves renovating the historic Salem Superior Courthouse and the County Commissioner building, both on Federal Street. Half of the units at The Exchange Salem would be designated affordable.

CANADA—8 Future Towers in Metro Vancouver That Will Be Taller Than Shangri-La
Kenneth Chan, Daily Hive, May 19, 2022
Currently British Columbia’s tallest tower—the Westbank’s Living Shangri-La in downtown Vancouver stands at 659 feet with 57 stories. This structure is expected to be surpassed by at least eight transit-oriented skyscrapers, all of which are to be built in Vancouver’s suburbs. Factors that may be driving construction away from the downtown include policies that suppress heights through zoning and community plans, greater levels of uncertainty, and higher costs. Seven of the future transit-oriented developments are to be located in Burnaby near Lougheed Town Centre and Metrotown stations. One will be in Surrey, adjacent to Surrey Central SkyTrain Station. With a height of 850 ft., the forthcoming Pinnacle Lougheed: Phase 1b building will be Western Canada’s tallest tower once completed.

TANZANIA—Dar es Salaam’s BRT: Why It Has Been a Long Bumpy Ride
Malve Jacobsen, The Citizen, May 17, 2022
Planning for the Dar es Salaam Bus Rapid Transit began in the early 2000s with the goal of replacing minibuses, called “daladala,” which, though reliable, could not keep pace with the City’s rapid population growth. One of six construction phases was completed in 2016, offering more than 300,000 trips daily. The second phase is under construction, funding has been secured for phases three to five, and phase six is still under discussion. The story of its development involves a wide assortment of international NGOs, development corporations and consultancies, local governments and transport businesses, and is deeply embedded in Tanzanian politics.

INDIA—PMC Sanctions 83 Proposals Under TOD Zone Along Proposed Metro Routes
Prachi Bari, Hindustan Times, May 15, 2022
The Pune Municipal Corporation (PMC) has sanctioned 83 proposals under the transit-oriented development (TOD) zone following the Maharashtra state government’s permission for an increased floor space index (FSI) for construction within 500 meters of proposed metro routes. Sanctioned proposals include 78 projects on lines one and two, and 5 projects on line three. Under the TOD policy, real estate projects get a higher FSI, up to four, although most sanctions offered by the PMC are up to three FSI.

Beyond the Half-Mile Circle: Expanding First-Mile, Last-Mile Access to Transit

July 8, 2022 Stephanie DiPetrillo Comments Off on Beyond the Half-Mile Circle: Expanding First-Mile, Last-Mile Access to Transit