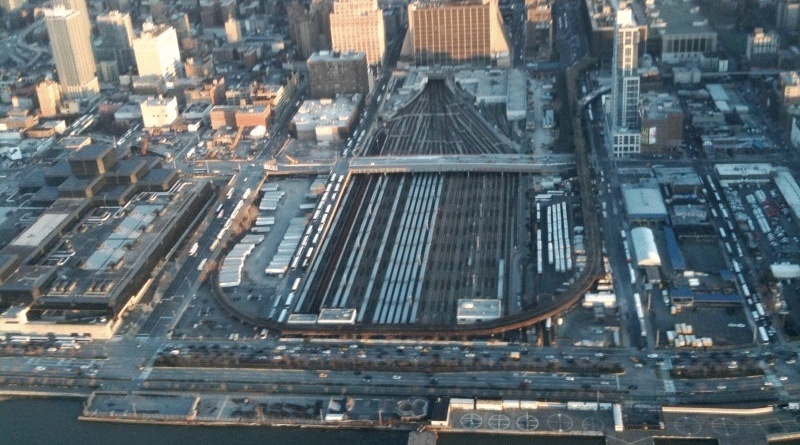 On Manhattan’s West Side sits what is arguably the last large area suitable for development in the borough – the 26 acre West Side Yard, a rail storage facility operated by the Long Island Rail Road. The site, situated between West 30th and West 33rd Streets and 10th and 12th Avenues, represents a remarkable opportunity to remake the West Side and to expand commercial and residential development in midtown Manhattan. The site has long been the target for redevelopment by the Bloomberg administration—having been the proposed site of a West Side Stadium. While grandiose plans have been envisioned, moving forward has always been hindered by a lack of transit access.

That situation will soon be remedied with the extension of the No. 7 Subway line of the New York Metropolitan Transit Authority (NYMTA). The line currently links Times Square with Grand Central Station on the East Side and continues eastward to Flushing, Queens. The No. 7 Subway line also connects with all of the north/south subway lines in midtown Manhattan. When the extension is complete in 2013, the No. 7 line will continue to the west from Times Square to its new terminus at West 34st Street and 11th Avenue, adjacent to the Javits Center and the West Side redevelopment zone. NYC is also studying the possibility of extending the No. 7 Subway line beyond Manhattan to Secaucus. This infrastructure improvement makes possible the construction of building platforms over the eastern and western portions of the rail yard and enables development to proceed on this significant air rights opportunity. The subsequent redevelopment of the site is expected to bring 750,000 additional workers and 20,000 new residents to the area.

The other key step for moving this project forward has been changes in zoning for the redevelopment area, comprised of six city blocks, sandwiched between 10th and 12th Avenues and 30th and 33rd Streets. In 2009, the New York City Council rezoned the industrial site to allow residential and commercial uses.

Of particular interest to major transit agencies and tax payers alike is that the subway extension and associated infrastructure improvements have not been financed by transit agency or public funds. Rather funding for the project has been provided by the sale of $2 billion worth of New York City municipal bonds. This process, known as tax increment financing (TIF), allows governments and public agencies to raise funds based upon the anticipated increase in real estate tax revenues that will result from major infrastructure improvements. While the first TIF plans date to the 1950s, they have not been widely used in New York City. Using TIFs, New York City raised $1.4 billion slated for the subway extension; the remainder of the funds will be used for other infrastructure improvements in the Hudson Yards area.

In 2010, the NYMTA signed a deal with the Related Companies to redevelop the site. Currently land is being cleared for the first building of the redevelopment effort, now known as the Hudson Yards. Ultimately the Hudson Yards plans call for the construction of 12 million square feet in 14 towers that will include new Class A office and retail space, a total of 5,000 affordable and luxury residential units, a cultural center, a hotel, a school, a parking garage, and ten acres of green space. The buildings are expected to be LEED Silver certified.

The construction of Related’s first tower, a 1.4 million square-foot office building, should begin once the land is cleared, though this is dependent on securing a tenant and construction financing. The first phase—four million square feet of office space atop of 750,000 square feet of retail space on the east side of 11th Avenue—is scheduled to be completed by 2015, while completion of the full plan is at least ten years away. Stephen Ross, the chairman of Related Companies, has stated that the project will be able to attract tenants by the end of the year despite the slow economy. He predicts that the company will sign 3.5 million square feet of space by the end of 2011 and is currently in negotiations with possible tenants.

The redevelopment of West Side Yards presents a significant opportunity as well as challenges to Manhattan. These changes and others such as the recent extension of the High Line—the park fashioned from a former elevated rail spur—are expected to bring a large number of new residents, workers, and visitors to the area. As the last large developable area in Manhattan, the project is an important one, and the forthcoming opening of transit access will play a central role in its success.