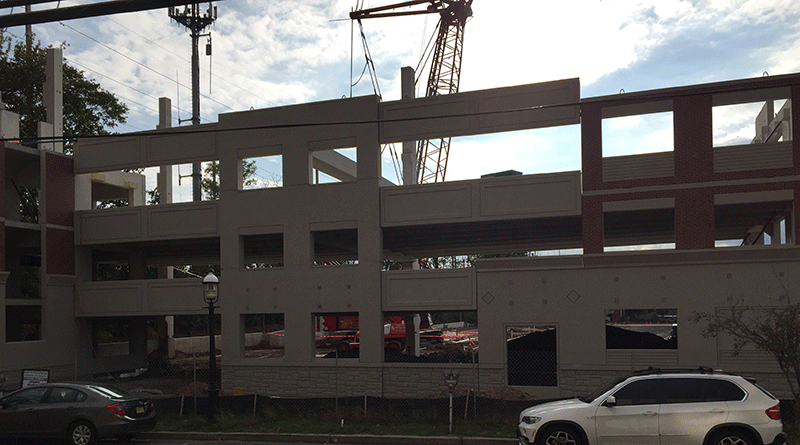 Efforts to advance redevelopment in the downtown have taken a step forward in Metuchen. Work has recently begun to transform one of the Borough’s numerous surface parking lots – the Pearl Street Lot – into a mixed use project with residential, commercial and public uses, and a parking garage. Located one block south of Main Street, Metuchen’s main commercial thoroughfare, the Pearl Street Lot is well situated and accessible to the Metuchen Station and adjacent to the Northeast Corridor right-of-way.

Metuchen Station is the ninth busiest outlying station in the NJ TRANSIT system with more than 3,700 riders boarding each weekday. More than 50 trains a day make the 30 minute trip from Metuchen to Newark Penn Station. Travel to New York Penn Station takes 52 minutes on average – express trains make the trip in as little as 43 minutes.  Frequent service is one reason that Metuchen is attractive to commuters who have chosen to reside in the Borough and to those coming from surrounding communities. The station is supported by parking spaces for about 800 vehicles in addition to the 670 spaces the Pearl Street Lot provided.

Planning for transit-friendly redevelopment has been a long term goal of the Borough. Metuchen Borough received designation as a New Jersey Transit Village by NJ Department of Transportation in 2003. Early planning efforts focused on pedestrian improvements including the Walk Metuchen program, which established, and used signage to identify, walking routes that connect outlying neighborhoods to the community’s center. In 2007, Metuchen received a Smart Future grant to support its community-based planning efforts. Workshops focused on ways to promote the vitality of Metuchen’s business environment, improve circulation, and importantly, identify opportunities for public space in the community’s center.

the Borough had attempted redevelopment at the Pearl Street parking lot site several times over the years, but none of those earlier efforts included a significant public space. In 2007, during one of several community workshops convened to focus on downtown redevelopment, the concept of a town square took shape. Citizens were yearning for a high quality public gathering space and it became clear that by strategically locating the town square, it could act as an activity anchor for Main Street and a focal point linking downtown redevelopment to Main Street and the train station.”

Understanding what the community desires provided the basis of plans for the five-acre Pearl Street Lot, which is owned by the Metuchen Parking Authority. The downturn in the economy provided the time when these plans could be refined and realized. Again according to Jim Constantine,

the Metuchen Parking Authority took advantage of the recession to advance planning of the project, seek public grants to help offset the cost of the parking garage and public space, re-zone the site, establish detailed design criteria, and to engage the development community by seeking expressions of interest. This ultimately led to a RFQ process to select a short-list of qualified developers followed by more formal design and financial submissions which were reviewed by a blue ribbon committee of Borough officials and citizens.”

In Fall 2012, Metuchen Parking Authority selected the proposal from Woodmont Properties, LLC and its partners out of seven proposals received in 2011. Woodmont has successfully developed properties in other transit-friendly locations including Cranford, Red Bank, and Morristown. The Woodmont Properties team includes Nexus Parking Systems, which will operate the parking garage. RTKL is the project architect. TimHaahs and Associates are providing parking analysis.

Woodmont Development, LLC received final Planning Board approval in July 2014. Plans call for 273 one- and two-bedroom housing units, 13,000 square feet of retail space, 750 parking spaces, and a half-acre public piazza. Affordable housing will be included with 15% of units designated affordable, and the remainder offered at market rate. Designs also call for pedestrian improvements along the railroad right-of-way that will result in a one-block connector between the parking garage and Metuchen Station.

The Pearl Street Lot closed in summer 2015. Valet and shuttle service to parking has been established to transport commuters between the station and more distant lots. Construction began this fall. The new parking garage will provide spaces to serve commuters, shoppers, and residents of the new project.

May 3, 2016 Stephanie DiPetrillo Comments Off on New and Newsworthy: March-April 2016