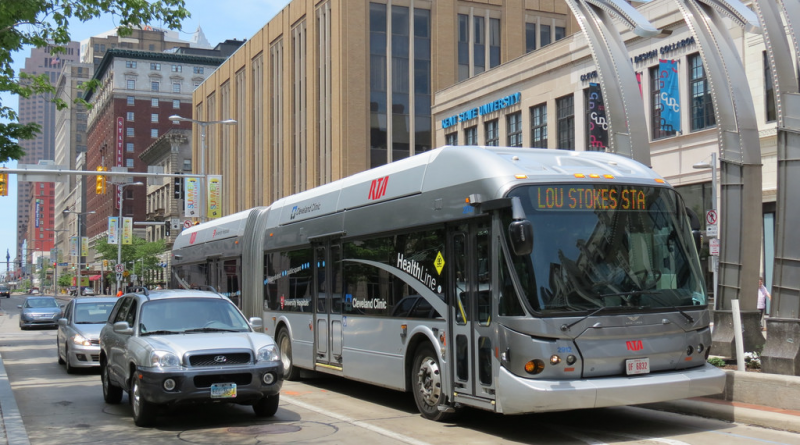 Cleveland has big plans for the Euclid Avenue Corridor. Once known as “millionaires’ row,” Euclid Avenue degenerated into an example of extreme urban blight, but is now experiencing a tremendous renewal, thanks in large part to the Greater Cleveland Regional Transit Authority’s (GCRTA) Euclid Corridor Transportation Project. This $200 million plus project is a 9.8-mile Bus Rapid Transit (BRT) system known as the Silver Line. The project is nearing completion with the grand opening scheduled for October 25, 2008 when the Silver Line will be substantially completed and its first service operation will begin. The system will become fully operational in December 2008.

A dedicated transitway will stretch from Public Square in the city’s central business district and pass University Circle near the Cleveland-East Cleveland border, connecting the region’s two largest employment districts. The BRT route will continue eastward to the Rapid Transit Louis Stokes Station at Windermere in East Cleveland. Key funding sources for the initiative include: the GCRTA, Federal Transit Administration, Ohio Department of Transportation, City of Cleveland and Northeast Ohio Areawide Coordinating Agency.

The Silver Line will utilize a network of stations in street medians that will allow level boarding and off-board fare collection. Other operational features will include precision docking, traffic signal prioritization, real time passenger information, frequent service and corridor “branding.” The GCTA has already made significant improvements to promote a pedestrian-friendly environment along Euclid Avenue—new and expanded street lighting, landscaping and street trees, sidewalks and pedestrian-friendly signage. Use of the stations has been phased in, coming online as construction is completed. Passengers board using newly constructed platforms. The current 40-foot buses will be replaced by new 63-foot articulated hybrid New Flyer buses that are currently in production. The GCRTA has estimated that by 2025, 29,500 passengers will ride the line each day.

Redevelopment and new construction projects abound along the corridor with more than four dozen separate projects, more than 95 percent of which have already been completed in anticipation of the BRT. Development has been supported by different sponsors, ranging from small local developers handling the redevelopment of one or two properties, to extensive new complexes being built by the Cleveland Clinic in the Fairfax/Cleveland Clinic district, nearly four miles to the east of Public Square, and by Case Western Reserve University in University Circle. For example, redevelopment has occurred throughout the historic Gateway District, located immediately east of Public Square, where a local developer has converted several long empty buildings into mixed-use residential over retail properties.

In the coming year, the Cleveland Clinic will complete construction on its new Heart and Vascular Institute. The $475 million complex will be the largest facility at the clinic and is expected to bring 1,500 new jobs to the city. It will serve as the new gateway to the Cleveland Clinic and will be easily accessible to the new BRT at the East 93rd Station located across Euclid Avenue.

In addition, Case Western Reserve continues to revitalize the University Circle neighborhood at the eastern end of Euclid Avenue. The university’s $150 million Uptown Arts and Retail District will include 80,000 square feet of retail space, approximately 300 residential units (condos and apartments) and structured parking. Construction is scheduled to begin in 2008. Also, Cleveland’s Museum of Contemporary Art (MOCA) plans to lease land from the university for its new 35,000-square foot facility, to be located at the corner of Euclid Avenue and Mayfield Road near the Cornell Road station, 4.7 miles from Public Square. The Euclid Avenue Silver Line will introduce BRT to the site and to the University Circle community which are already served by light rail service.

According to the GCRTA, the projected economic impact by 2025 of the entire project will be: