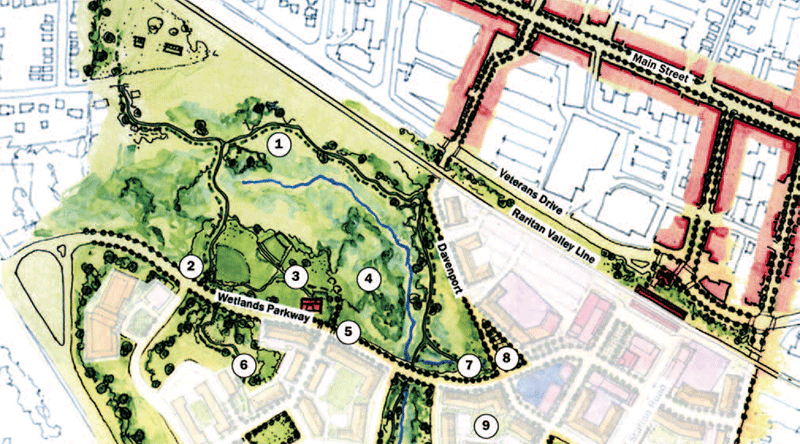 In July the NJ Department of Transportation designated Montclair and Somerville as the state’s latest Transit Villages. Each city has demonstrated an ongoing commitment to TOD.

Located in Essex County, Montclair Township is home to 37,000 people and is the site of six stations all located on the Montclair-Boonton Line. The Transit Village designation is for the Bay Street Station, situated on Pine Street between Bloomfield and Glenridge Avenues. About a thousand riders board at the station each day and avail themselves of either a “one-seat ride” via MidTOWN DIRECT to midtown Manhattan or to Hoboken and lower Manhattan via a PATH transfer. Commuters can reach New York Penn Station in about 39 minutes on MidTOWN DIRECT or Hoboken Station in about 30 minutes.

The first TOD project around the station was completed in late 2009—the Montclair Residences at Bay Street Station. Station area plans call for the redevelopment of a total of nine acres and will eventually include seven residential projects as well as a commuter parking deck.

As part of its Transit Village designation, Montclair became eligible for $100,000 in state funds to support its TOD efforts. Montclair has proposed to continue its efforts to improve its pedestrian facilities and has requested funding for streetscape improvements, including developing a wayfinding system as well as upgrades to sidewalks and crosswalks. In 2009 Montclair was the first municipality in the state to adopt a complete streets policy which confirms its commitment to the design and operation of roadways for all users.

Designation as a Transit Village is another significant step in Somerville’s ongoing effort to reclaim part of its downtown. In recent years, the borough has worked diligently on an ambitious effort to redevelop its former landfill, 160 acres located to the south of the Somerville Station. Each day more than 700 passengers board at the Raritan Valley Line’s Somerville Station. Average travel time to Newark Penn Station is 54 minutes, where passengers can connect to NJ TRANSIT trains to New York Penn Station and other locations or to PATH service to lower Manhattan.

In 2005 the borough took its first steps toward rehabilitating the area by evaluating environmental conditions and initiating a public visioning process that led to the adoption of the award-winning Station Area and Landfill Redevelopment Plan in 2007.
The redevelopment plan specifies three distinct zones:

Last year, the landfill site was designated as a Brownfield Development Area by the NJ Department of Environmental Protection and received funding for testing and the eventual cleanup of the site.

As part of its Transit Village designation, Somerville became eligible for and was awarded a $100,000 state grant that the city will use to promote pedestrian access and circulation by widening sidewalks on Division Street.

Updates to the Somerville Rail Station will be completed by mid-2011. Started in 2009, the $16 million renovation will upgrade platforms, the waiting room, and ticket vending. Additionally, the station will be accessible to passengers with disabilities when work is completed.