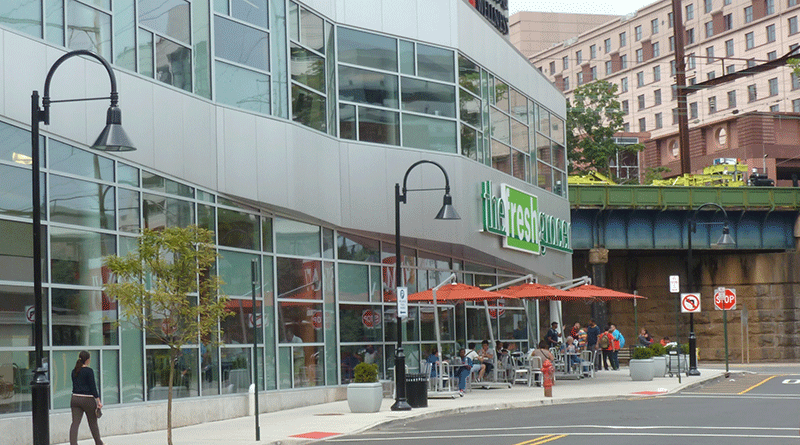 In late 2012 New Brunswick received a long anticipated Christmas present: the opening of Wellness Plaza. Developed by the New Brunswick Development Corporation (DEVCO) and owned and operated by the New Brunswick Parking Authority, Wellness Plaza brought two new additions to the Hub City: 1) the Fresh Grocer, the city’s first full-service, downtown supermarket in over twenty years, and 2) the Robert Wood Johnson (RWJ) Fitness and Wellness Center. True to its name as a place that promotes healthy living, Wellness Plaza is centrally located near the heart of the city’s transit district, 200 yards from the New Brunswick rail station on NJ TRANSIT’s Northeast Corridor Line. Funding for the project was drawn from a variety of sources, including Build America Bonds, the New Markets Tax Credit Program, grants from Middlesex County, and the New Jersey Urban Transit Hub Tax Credit Program. The total cost of the project was $106 million.

The 49,000 square-foot Fresh Grocer brings to the city a full range of offerings including fresh produce, fresh meat and seafood, a salad and soup bar, as well as many items that appeal to the city’s large Hispanic community. The addition of a grocery store to the downtown contributes greatly to meeting the needs of all those living, working, and visiting New Brunswick, and helps to address issues of food insecurity in this central New Jersey city.

Like many other urban areas in New Jersey, New Brunswick has suffered from a lack of fresh food within easy access of residents, especially those who do not have access to a vehicle (see map below). As the report “The Need for More Supermarkets in New Jersey” by The Food Trust points out, the state has 25% fewer supermarkets than the national average. Urban and rural areas lack supermarkets the most as supermarkets tend to be located in suburbs surrounding cities. As a result, residents in cities and rural areas, such as those in New Brunswick, must travel greater distances to buy food, which can be a deterrent to healthy eating. The lack of access to affordable, healthy food puts urban and rural residents at risk of diet-related diseases, such as hypertension and obesity.

New Jersey is taking steps to eliminate food deserts in the state. In March 2012, the Economic Development Authority, with support from the Robert Wood Johnson Foundation (RWJF) and The Reinvestment Fund, expanded its New Jersey Food Access Initiative with a $12 million investment from RWJF, quadrupling the state’s investment. The Initiative offers low-interest loans and grants to projects urban areas such as Newark, New Brunswick, and Camden.

Wellness Plaza is also home to the RWJ Fitness and Wellness Center, a partnership between the RWJF and DEVCO. The 62,000 foot center houses a swimming pool and offers various fitness classes and access to personal trainers. In partnership with New Brunswick’s Public Schools elementary school students receive swim lessons as part of the school curriculum.

Finally, the project includes a 1,275-space parking garage. Construction of a walkway connecting parking at Wellness Plaza to the eastbound platform is slated to begin in 2014. The new garage replaces the Ferren Deck, which closed in March. Redevelopment of the Ferren Deck for residential, office, and commercial purposes is planned.

The Wellness Plaza is part of a larger effort to redevelop downtown New Brunswick along TOD-principles. Wellness Plaza joins the Gateway Center, Skyline Tower, One Spring Street, and other recent projects that have reshaped the city’s downtown and added market rate and affordable housing, retail, and services that have brought vitality to the community. Both the Fresh Grocer and RWJ Fitness and Wellness Center are committed to local hiring. Altogether, Wellness Plaza should result in about 370 permanent jobs. Efforts are underway to conduct onsite job training for city residents.

What is a Food Desert?

New Buildings Rise … and to Rise in New Brunswick

September 23, 2009 Steph_Admin Comments Off on New Buildings Rise … and to Rise in New Brunswick