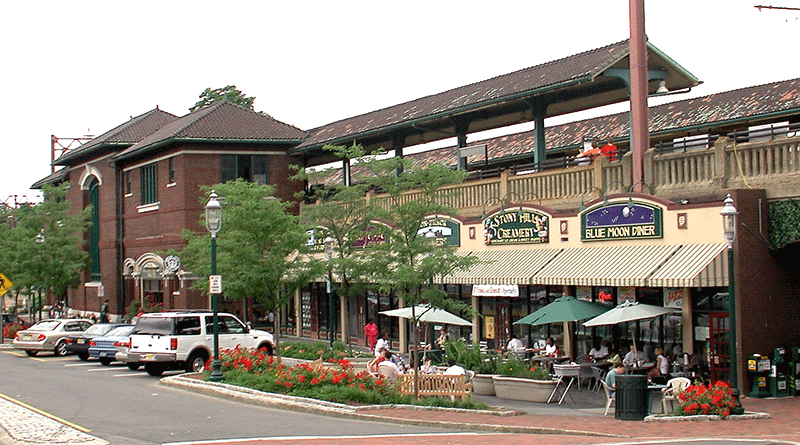 Despite current economic doldrums, projects have moved forward in NJ Transit Villages. In May 2010, The Avenue at South Orange officially opened to the public. Located just two blocks from the South Orange Station, the three-story mixed use project offers 79 condominium units as well as 4,200 square feet of ground floor retail. New residents will join the nearly 3,400 daily passengers who take advantage of South Orange’s enviable transit service—a 33 minute one-seat ride to New York Penn Station via the MidTOWN DIRECT—as well as access to Hoboken and lower Manhattan (with a PATH transfer). Additionally, two bus routes connect passengers to the Newark Light Rail at the Branch Brook Park Station for access to downtown Newark and to midtown Manhattan’s Port Authority Bus Terminal via Maplewood and Irvington.

In May 2003 Sterling Properties, the developer, saw the opportunity to build concurrently the transit-oriented residential building and a gourmet grocery in a former supermarket located adjacent to the train station on adjacent sites. Sterling Properties gained approval for the two projects and began construction in 2007 on both. The supermarket building now houses the highly successful Eden Marketplace gourmet grocery and the Above Restaurant & Bar. In 2009 New Jersey Future awarded The Avenue at South Orange and The Marketplace at Eden its annual Smart Growth Award in recognition of how these projects have helped revitalize South Orange’s downtown.

“Showcase Homes” at The Avenue start at $299,000 and other units start from the $400,000’s. Units are also available for lease with rents starting at $1,800 for one-bedroom and $2,375 for two-bedroom units. Interest in the project has been high. During a preview weekend of the development held in mid-April, Sterling Properties’ director of sales and marketing, Rosanne Brooks, stated that “People traveled from all over the region to visit The Avenue, which is further proof that many prospective buyers want to live in a lively downtown location that is just steps from mass transportation, as well as excellent shopping, dining and entertainment.” It has been reported the project is 35 percent leased as of mid-August.

The activity from the new residents is expected to increase the economic sustainability of the Township’s downtown businesses. A number of businesses have expressed interest in renting one of the two retail spaces available at The Avenue at South Orange. Rental rates for the spaces are $26/sf per year. The project is anticipated to provide significant ratable revenues in the form of a PILOT agreement (payment in lieu of taxes) with the municipality. According to Village President, Doug Newman, “As South Orange’s newest development, [The Avenue] is an integral part of a well-planned, well-managed, smart-growth strategy that adds new residences, new businesses and new jobs, all in close proximity to public transportation, while preserving the character and sense of community integral to South Orange.”

According to Joe Forgione of Sterling Properties, “If there is a story to be written about a transit-oriented development project, this is it.”