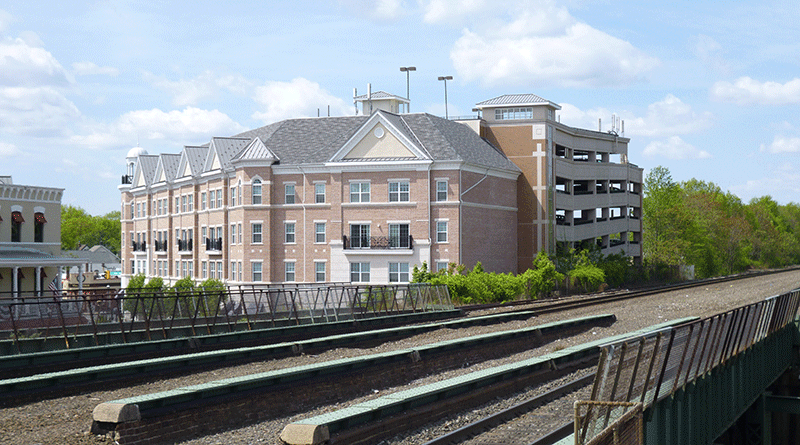 What’s old is new again in Cranford, where the last decade has seen a revival brought about by redevelopment near the train station, renewing a pattern as old as the community itself. Cranford, a designated New Jersey Transit Village, is now home to two TOD projects, Cranford Crossing, built in 2006, and Riverfront at Cranford Station, completed in fall 2013.

Public transportation bolstered the development of these projects. Located on the Raritan Valley Line, Cranford Station sits at the heart of the community’s commercial district and is where nearly 1,300 passengers board each weekday. Ridership has grown nearly 32% over the last 10 years. Twenty-five trains travel to midtown New York each weekday. The trip takes about 50 minutes and requires changing trains at Newark Penn Station.

Cranford’s newest project, Riverfront at Cranford Station, capitalizes on these assets and builds on a history of transit-focused redevelopment. Recently completed and now available for lease, Riverfront satisfies demand for housing and retail near transit. The project offers 127 luxury one- and two-bedroom rentals located just a two minute walk from Cranford Station. The five three- and four-story buildings that make up Riverfront sit a block south of the train station. The buildings align South Avenue, High Street, and Chestnut Street, and open to the east toward the Rahway River. The mixed use structures also house 20,000 square-feet of retail at ground level along South Avenue and feature 20,000 square-feet of office space.

Riverfront complements Cranford’s first large-scale redevelopment project, Cranford Crossing, which sits a block west of the station. Completed in 2006, Cranford Crossing added 50 luxury rental apartments as well as 22,000 square-feet of ground-floor retail in two buildings–one three-story and one four-story–on either side of South Union Avenue. In the taller structure, housing and retail wrap a 310-space parking garage, screening it from the street. In 2005, New Jersey Future awarded Cranford Township and the developer, Westminster Communities, a Smart Growth Award for the project, citing the development’s respect for Cranford’s historic, walkable downtown.

According to Kathleen Miller Prunty, director of the Office of Business & Economic Development, “These projects have added vitality to the downtown and stimulated growth on both a large and small scale. Many of the early skeptics admit these projects did not generate school children or dramatically alter the character of Cranford. In fact, they generated investment, revenue and a renewed interest in the business district and community. We are seeing lots of young people moving here from places like Hoboken because of access to transportation, a pedestrian-oriented town center and excellent schools.”

Making the changes necessary to encourage transit-oriented development continued after designation. Through its new Master Plan—updated in 2009—Cranford has implemented new zoning that demonstrates its commitment to this form of redevelopment. Most significantly, the community has increased residential growth nearest to the train station. Specifically, the Master Plan designates two redevelopment districts that allow for exceptional or complex land use combinations that might otherwise clash with the separated land uses typical of the zoning plan. Both the Cranford Crossing and the Riverfront Development districts were planned to allow for the township’s two TOD projects. These districts allowed for additional housing and retail close to the train station.

The Office of Business & Economic Development continues its support of Cranford’s revitalization process and works to attract new businesses and downtown residents. It has been successful in this pursuit as is evident from the current 1.9% vacancy rate in the business district. The Office supports business through its Business Grant Program which provides funds for aesthetic improvements such as signage, awnings, and façade enhancements. The Office also continues its work on numerous arts projects, investing in painting street benches and creating a mural and a tile art display at the station.