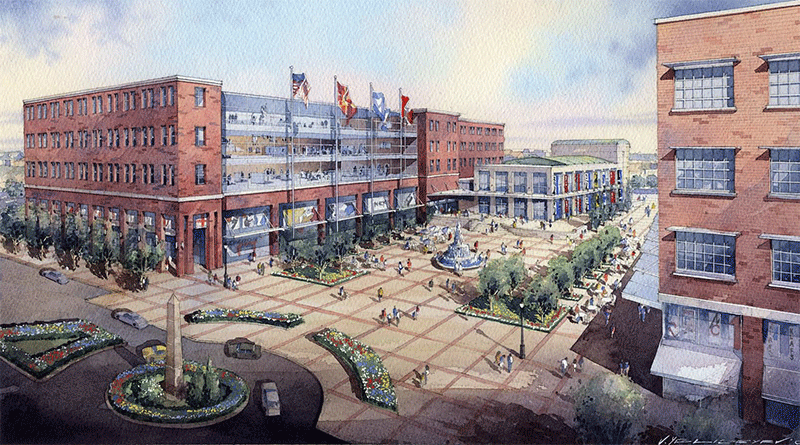 For the past two decades, A. Nelessen Associates (ANA) in Belle Mead, NJ has been involved in numerous projects utilizing transit-oriented urban design principles. Realizing that transit is a major component of urban design, the firm has concentrated on mixed-use projects containing retail, residential, embedded parking and civic space. Its fundamental belief is that locating projects near transit encourages walkability, safer streets, healthier people and less pollution.

Some of ANA’s transit-oriented designs include the plan for downtown Metuchen (1970s) and the preliminary vision for the extension of the MAX system in Portland, OR (1990s). More recent projects have ranged from large cities such as Atlanta, Milwaukee, Orlando, Rotterdam and Durbin, South Africa, to smaller New Jersey communities such as Dover, River Edge and Morristown. ANA has also written several major transit-oriented redevelopment plans, such as Newark’s Mulberry Street Promenade and Downtown Core Plan. The firm’s recent project in Collingswood (a New Jersey designated Transit Village) involved the creation of a transit-oriented redevelopment plan which incorporated mixed-use infill, new streetscapes and bicycle lanes, sidewalk improvements, and “on-demand” transit/shared parking decks. The “Heart of Collingswood” project earned the firm a Smart Growth Award from New Jersey Future in 2004.

The firm has pioneered and trademarked the Visual Preference Survey™ (VPS) which allows communities to participate in the creation of a physical vision of their town or neighborhood. After participants are shown various visions of their community, they indicate which improvements they would most like to see. In conjunction with the VPS™, their community design process produces designs based on traditional development forms, proportions and shapes. ANA urban design places a heavy emphasis on mixed-use centers, compact design, walkability and cyclability, proximity to transit and the creation of parks, plazas and other civic spaces. ANA believes that establishing integrated transportation systems creates more vibrant, livable places while also balancing the mobility needs and desires of all community members.

ANA’s work in transit-oriented development has earned recognition from the New Jersey Planning Officials, the NJ Office of Smart Growth and the AIA of New Jersey. Some recent award-winning projects include: the Jersey City Greenway Project and the Jersey City University West Campus Redevelopment Plan.

The firm’s principal, Anton (Tony) Nelessen, is a charter member of the Congress for the New Urbanism. He has more than 37 years of urban design experience and has presented at many major conferences around the world. He also serves as an Associate Professor at the Edward J. Bloustein School of Planning and Public Policy, Rutgers University, in the Graduate Urban Planning Program. He is the author of numerous publications including a book,Visions for a New American Dream, published by the American Planning Association (1999). Professor Nelessen holds a professional degree in architecture from the University of Minnesota and graduated from the Harvard Graduate School of Design.