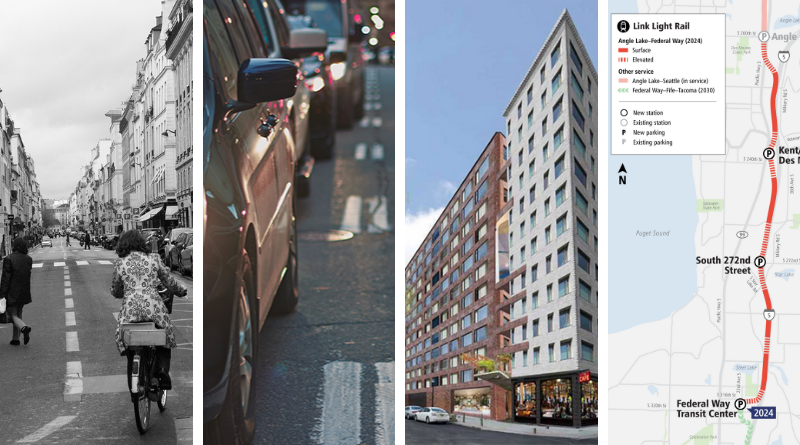 The Paris Mayor Won’t Let Coronavirus Slow Her Car-Free Ambitions
Feargus O’Sullivan, City Lab, April 29, 2020
As Parisians anticipate a May 11th easing of COVID-19 restrictions, Mayor Anne Hidalgo continues efforts to reduce the impact of cars and expand access to walking and biking. These efforts predate the pandemic, but early studies suggesting a link between poor air quality and COVID-19 deaths lend support to the mayor’s auto pollution and congestion reduction goals. Hidalgo has focused on making more space available to pedestrians and cyclists, as well as expanding city bus routes and restricting the use of older cars. Paris is one of several European cities that has expanded bike lanes and pedestrian amenities in the wake of the crisis; others include Milan, Barcelona, Brussels, and Berlin.

Ad Man to MTA: To Restore Trust, Don’t Sugarcoat COVID-19 Crisis
Joseph Cianciotti, Streetsblog NYC, April 28, 2020
The New York Metropolitan Transit Authority (MTA) and other transportation providers may want to consider the agency’s late 1980s advertising campaign for guidance on how to bring riders back to their services. Joseph Cianciotti was part of the team at Bergelt Litchfield Raboy & Tsao that produced the MTA’s “We’re Coming Back, So You Come Back,” campaign that promoted the New York subway system after a long decline. Then the issue was crime, now it is COVID-19, but just like in the 1980s the agency will need to demonstrate that it has corrected the situation. The transit agency must implement safety practices to stem the spread of disease and then promote these efforts to the public.

The Coronavirus Pandemic Is Forcing Cities to Rethink Public Transportation
Sasha Belenky, HuffPost, April 27, 2020
Italy will become a test case on how to safely reopen after lockdown as 2.7 million Italians are expected to return to work next week and about 15 percent will most likely travel by public transit. The nation’s transport ministry has suggested limiting passengers on buses and trains, placing ground markers to enforce social distancing, and using camera systems and personnel to count passengers and prevent overcrowding. Other measures include the use of electronic ticketing, hand sanitizer dispensers, frequent disinfection of vehicles, and adjustments to the ways passengers board and exit vehicles and stations. Spreading out commute times and commuters to reduce congestion may also help prevent transmission of the disease. Efforts have also focused on alternative travel modes. Bologna is asking for federal funds to purchase e-bikes and electric scooters. Milan plans changes to its streetscape to promote safe and spread out walking and biking.

Why We Need ‘Distributed Density’
Lloyd Alter, Treehugger.com, April 27, 2020
As density has become the bogeyman of the corona pandemic, scholars, researchers, and others have begun to counter this view with more nuanced discussions about density and development. A recent report from the Toronto’s Ryerson City Building Institute, Density Done Right, explores what it calls distributed urban density, rather than “tall and sprawl” development. The researchers position their work as “a thoughtful approach to greater urban density”. They explore how distributed density supports livability, affordability, and environmental sustainability.

How do we promote efficient and equitable transportation during and after the pandemic?
Imelda March, Streetsblog Chicago, April 24, 2020
To better allow for social distancing and to encourage walking and biking, cities throughout the U.S. are experimenting with ways to open up space that has previously been dominated by cars. These efforts seek to provide safe and accessible transportation to all users now and in the future. Oakland, California has implemented its “Slow Streets” program, which bans through traffic on 74 miles of side streets and opens them to walking, biking, and other uses. However, there is also concern that encouraging people to be active in the streets could be counter-productive to efforts to prevent the spread of COVID-19.

The Pandemic Shows What Cars Have Done to Cities
Tom Vanderbilt, The Atlantic, April 24, 2020
Author of Traffic: Why We Drive the Way We Do, Tom Vanderbilt looks at how the absence of cars has allowed pedestrians to look at the space devoted to them with fresh eyes. He observes that the lockdown shows Americans how much room our cities have devoted to cars, and demonstrates how single-occupancy vehicles have acted as the original “social-distancing machine” by requiring considerable space for the transport of a single travel. He suggests that the current crisis is an opportunity for cities to reconsider their allocation of space.

The Lofts at Union Mills Unveils One-Of-A-Kind Flex Spaces Adaptable to Nearly Any Business
Jersey Digs, April 28, 2020
An advertising article shared by Anthony Piscitelli of UNLMTD Real Estate showcases The Lofts at Union Mills, located within walking distance of the HBLR in Union City. The former R.H. Simon Silk Mill has been adapted into a multi-use complex comprising seven brick buildings connected by courtyards, bridges, and walkways that span a city block. All told, the property offers 125,000 sq. ft. of unique space that retains original wood flooring and skylights and is suitable for a variety of businesses. Street-level spaces offer private entrances and direct access to shared loading areas.

Groups Push Turnpike Authority to Help Transit, Not Widen Roads
Michael Symons, 92.7 WOBM, April 27, 2020
On Monday, a coalition of environmental and transportation groups issued a report outlining alternative plans before the Turnpike Authority board’s anticipated vote on its capital plan and toll hikes. Reacting to the Turnpike Authority’s plans for road expansion on the Garden State Parkway and New Jersey Turnpike, the groups seek a realignment and reallocation of the new toll revenues to better achieve state climate-change goals. The report calls for $10B in road and bridge repairs and $26B in transit projects including several new commuter rail lines and light-rail lines throughout the state. The Turnpike Authority Board met on Tuesday, but the toll plan was not included in the agenda.

Plans Revealed for 12-Story ‘One Grove’ Project in Jersey City
Jared Kofksy, Jersey Digs, April 27, 2020
A new mixed-use development could begin construction by the end of the year in Jersey City’s Liberty Harbor North Redevelopment area. Plans call for the 12-story “One Grove” building to offer 148 residential units above ground floor retail and about 75 parking spots. The Board of Commissioners of the Jersey City Redevelopment Agency is currently reviewing the proposal.

Property Along Newark Bay in Bayonne Sells for $4.5M
Jared Kofksy, Jersey Digs, April 27, 2020
Last year, Bayonne Luxury Waterwalk, LLC acquired a 2.32-acre parcel on Newark Bay for $4.55 million. Records show that the property at 219 West 5th Street in Bayonne is also the subject of two resolutions adopted in January by the Bayonne Municipal Council. One declared the property to be a “non-condemnation area in need of redevelopment,” while the other designated Bayonne Luxury Waterwalk as the redeveloper of the site. The second resolution also noted that the municipal government plans to enter into a redevelopment agreement with the firm. The site is located about a half-mile from the 8th Street HBLR Station.

ILLINOIS—Vermilion Development Gets Approval for 18-Story, Class A Office Tower in Evanston
RE Journal, May 1, 2020
The Evanston City Council recently approved an 18-story, 210,000 sq. ft. office project to be located in the city’s downtown and less than 1,000 feet from both the ‘L’ and Metra rail service. Vermillion Development is advancing the project, the first high-rise office building to be constructed in the city in 20 years. The project, 605 Davis, will employ sustainable design practices and offer Class A office space, which is in high demand in Evanston; office rents have risen 27.2 percent over the last five years and vacancy rates stand at slightly over five percent. The building will feature ground floor retail space and offer a large bike room to its tenants. The top two floors provide views of Lake Michigan and Chicago.

COLORADO—Apartment Developer Buys Site for 325 Units at Arista
Jill Jamieson-Nichols, Colorado Real Estate Journal, April 27, 2020
Star Broomfield LLC recently purchased an 11.3-acre site for $7.2 million, where it will develop a new mixed-use complex. The parcel sits within the Arista transit-oriented development near the U.S. 36 & Broomfield Station, about midway on the FF1 route that connects Boulder and Denver. The complex will comprise 325 apartments and an unspecified amount of retail space. Plans call for 582 parking spaces, slightly more than required, as well as electric vehicle charging stations.

CALIFORNIA—Jamboree Begins Construction on Capstone Development to Change Trajectory of Neighborhood in Anaheim, CA
PRWeb, April 27, 2020
The City of Anaheim will soon welcome another affordable housing option built by the Jamboree Housing Corporation. Construction began earlier this week on Manchester-Orangewood, a 2.86-acre development that will soon be home to a four-story apartment complex with 102 residential units. The area is notably transit-rich, with access to two major regional employment centers, the Anaheim Resort and the Platinum Triangle.

Want Equitable Cities? We’ll Need More Women in Transportation Planning
Abbey Seitz, Streets MN, April 27, 2020
Women make up the majority of US public transit riders. Despite this, a recent study by the Mineta Transportation Institute found that women comprise only 15 percent of the American transportation workforce. The result of male-dominated transportation service provision and planning contributes male-oriented scheduling and service, overlooking the needs of 55 percent of transit riders. As the participation of women in the workforce rises along with women’s use of public transit, planners face the challenge of meeting their specific travel needs and improving transportation and public spaces for women and girls.

DISTRICT OF COLUMBIA—This Streetcar-Bus Hybrid Ran in Arlington and Fairfax in the 1930s
DW Rowlands, Greater Greater Washington, April 26, 2020 (first published March 22, 2017)
Though the streetcar and electrified light rail have made a resurgence in a few major cities across America, some of the first and most memorable lines connected the suburbs of Arlington and Fairfax to the busy streets of Washington D.C. In this nostalgic look back at the hey-day of streetcars and guided bus services, author DW Rowland reminds us of the importance of the innovative transit experiments and transit-oriented communities of yesterday and today.

WASHINGTON—Building Demolition Continues on Kent’s West Hill to Make Room for Light Rail
Steve Hunter, The Kent Reporter, April 22, 2020
Work continues in preparation for the 7.8-mile extension of the Sound Transit light rail line, which when completed will connect Angle Lake, Kent, Seattle, and Federal Way, and terminate at SeaTac. In May, crews will remove about 70 buildings in Kent to make room for the line and construction. Kent will be home to two stations – Kent/Des Moines and Star Lake. Each will have parking garages, with 500 and 1,100 spaces, respectively. There are also preliminary plans for transit-friendly development near each station. The $3.1B rail line extension is expected to open in 2024.

CALIFORNIA—New Batch of Renderings Released for Cumulus District in West Adams
Kelsey Pudlowski, Livabl, April 20, 2020
Developers Carmel Partners released a new website showcasing the Cumulus District, an 11-acre mixed use development to be built in the Culver City Arts District near the La Cienega/Jefferson Metro Station. When complete, Cumulus District will comprise a total of 1,200 apartments, 100,000 sq. ft. of commercial space (including a 50,000-square-foot Whole Foods Market), and a sustainably-designed one-acre park. Among the structures will be a 31-story residential tower known as ARQ, and a collection of seven-story mid-rise buildings, called VOX. Preleasing for 300 units in ARQ will begin in June, with move-ins beginning in September.

CANADA—Colonnade Bridgeport, Fiera Acquire Ottawa Redev Site
Don Wilcox, Real Estate News Exchange, April 27, 2020
Following partnerships on two other Ottawa TOD projects, Colonnade Bridgeport and Fiera Real Estate have joined to purchase a five-acre redevelopment site that lies east of the downtown and adjacent to the city’s main train station. The partners foresee a long development horizon of up to 10 years, and have leased the property back to the seller, a longstanding business known as Dustbane. The developers describe plans for the site as an “urban village” with rental housing, as well as services and retail components, but have yet to make definitive plans.