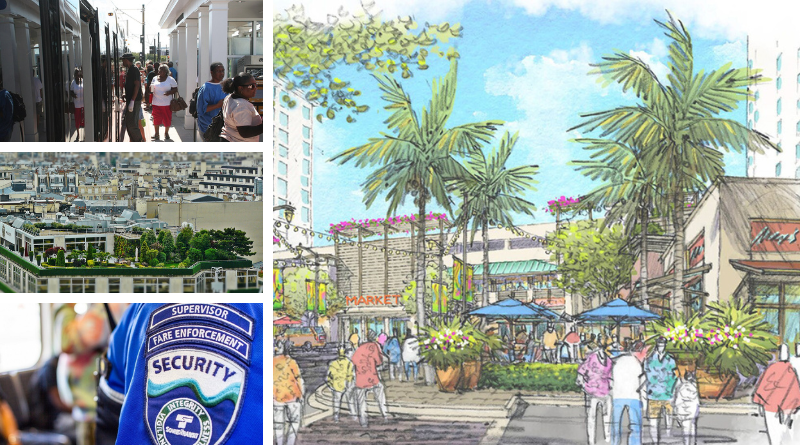 The Public Hearing Process for New Housing Is Broken. Here’s How to Fix It.
Anika Singh Lemar, Brookings, May 4, 2022

Developers frequently face uncertainty when seeking zoning approvals for multifamily housing due, in part, to public hearings where speakers are often self-interested residents and where few mechanisms exist for addressing misinformation. Fixing disproportionately represented public participation processes could be the key to increasing housing production, improving representation of important constituencies (including future residents), and addressing the housing crisis. Lemar suggests replacing the existing system with one similar to the child care licensing process, which is objective and “as-of-right,” while still incorporating public participation during the drafting of regulations.

CDC Reasserts Mask-Wearing Recommendation on Public Transit
Joseph Ostapiuk, SILive.com, May 5, 2022
Recent increases in new cases and the virulence of coronavirus variants have led the Centers for Disease Control and Prevention (CDC) to reissue its recommendation for wearing masks when taking public transit or while in transportation hubs like terminals and airports. The agency took this step after a federal court ruling struck down a national mask mandate on public transportation.

VIRGINIA—VA: Editorial: Spotlight on Mass Transit
Editorial Board, The Virginian Pilot, May 3, 2022
COVID grants have been crucial in keeping transit systems running. Taking advantage of a $247,500 federal COVID grant, Virginia is developing a public relations campaign named “Rediscover Your Ride” based on improved sanitation and safety features to lure people back to public transit. Richmond and other cities utilized the grants to adopt a no-fare policy, leading to increased ridership, primarily by essential workers of low-income groups. The pandemic proved that many low-income city dwellers rely heavily on buses, suggesting that a free transit system that essentially pays for itself would benefit many low-income residents and improve their quality of life.

Cities Want to Return to Prepandemic Life. One Obstacle: Transit Crime.
Julie Bosman, Sophie Kasakove, Jill Cowan and Richard Fausset, The New York Times, April 28, 2022
Transit agencies across the country face an uphill battle against a rise in transit crime, which may affect whether riders return to using public transit. According to experts, the situation is complicated in that an increase in ridership will increase safety, and yet, if transit systems feel unsafe, people refrain from utilizing transit services.

NEWARK—Who Owns Newark? City Fights Back Against Corporate Home Buying Spree
Eric Kiefer, Patch-Newark, NJ, May 5, 2022
The cost of renting a home in New Jersey’s largest city is rising. According to the Rutgers Center on Law, Inequality and Metropolitan Equity (CLiME), one main reason for this may be that nearly half of Newark’s residential property is owned by corporations. A recently released report states that between 2017 and 2020, about 2,500 homes were sold to institutional investors, a practice that is legal but harmful to local communities. In recent years, the City has taken several steps to increase home affordability and ownership among city residents, and there are plans for additional measures.

MORRISTOWN—$28.48M Loan Secured for Morristown Development
Amie Johnstone, Jersey Digs, May 3, 2022
The Hampshire Companies has secured a $28.48M loan to support construction of an 85-unit apartment building at 175 Morris Street in Morristown. The four-story structure will also offer 610 sq. ft. of ground-level retail space. The project will be located less than a ¼-mile from the Morristown rail station, which provides direct access to New York Penn Station via NJ TRANSIT.

WESTFIELD—Westfield Planning Board Approves 10 Housing Units on .41 Acres
Andrea Crowley-Hughes, TAPintoWestfield, May 3, 2022
The Westfield Planning Board approved an amended application for a 10-unit residential building at 440 North Avenue East; the amendment addresses variances for lot coverage and setbacks. The project is located in an affordable housing overlay district and will include two affordable units. The building will be located on a .41-acre parcel, with the density of 24.39 units per acre. The new housing is among a series of changes coming to North Avenue.

HACKENSACK—$78M Refinancing Secured for Bergen County Multi-housing Community
Jenna Sharp, JLL.com, May 2, 2022
JLL Capital Markets secured $78 million in refinancing for The Current on River, a 254-unit, newly constructed multi-housing community in Hackensack. Built in 2020, the development features one- and two-bedroom units with an average size of 846 sq. ft., and a range of amenities, including a work lounge and pool. Located at 18 East Camden Street, residents can easily access two NJ TRANSIT train stations and the Hackensack Bus Terminal, with the River Street at Berry Street stop directly outside to the east.

WASHINGTON—Sound Transit Eases Fare Enforcement Amid Equity Concerns
David Kroman, The Seattle Times, April 28, 2022
Sound Transit’s Board of Directors voted to revamp its fare enforcement practices and create a less punitive system, including more education and sensitivity to racial disparities. The new policy will protect vulnerable commuters by taking enforcement out of the hands of security, increasing the number of warnings, and decreasing the likelihood of riders being taken to court for unpaid fares. Additionally, the new policies remove the possibility of suspension for nonpayment and provide riders with an appeals process for enforcement action taken against them. While some raised concerns that the new policies would serve as a de facto endorsement of riding without paying, Wes Mills, a member of the Transit Riders Union, commented that high penalties and tours through the courts can ruin people’s lives.

How Does Transit Help the Climate?
Kevin X. Shen, Union of Concerned Scientists, April 26, 2022
Shen, a policy analyst at the Union of Concerned Scientists, argues that moving away from auto-centric planning and toward transit-oriented clustered development will not only reduce carbon emissions but increase accessibility for the more than 10 million U.S. households that do not own cars. Climate change can be mitigated by weighing climate impacts when framing transportation projects, investing in electric transit, and integrating transit planning with sustainable land-use policy. Additionally, investing in affordable housing and anti-displacement measures will prevent gentrification and bring equitable development.

CALIFORNIA—Construction Begins on Metro Affordable Housing Project in East Hollywood
City News Service, Los Angeles Daily News, May 5, 2022
Crews broke ground on a 187-unit transit-oriented affordable and permanent supportive housing development above the Vermont/Santa Monica Metro Station in East Hollywood. Half of the units at the six-story building at 1021 North Vermont Avenue will be offered to low-income households as affordable housing. The remaining units will provide permanent supportive housing for the homeless. The development is part of Metro’s Joint Development Policy to build 5,000 affordable transit-oriented developments on land owned by the agency. Metro will prioritize local and legacy businesses when it leases retail space in the building.

HAWAII—Height Limits, Community Sentiment Under Consideration In Waipahu Housing Proposal
Catherine Cruz, Hawaii Public Radio, May 5, 2022
A proposed project in Waipahu along the railroad promises to offer 500 units of much-needed affordable housing as well as commercial development. Some residents believe, however, that the construction is too tall and out of character for the area. Richard Oshiro, a member of the Waipahu Neighborhood Board, says the proposal disrespects the nearby low-rise heritage structures, such as the Phillipino Cultural Center and Plantation Museum. Nonetheless, Harrison Rue, the director of Honolulu’s transit-oriented development program, stated that the city commission firmly supports the affordable housing development and that disagreements will likely be resolved in an upcoming town hall meeting.

MASSACHUSETTS—Groundbreaking on 35 Garvey Street Development
Staff, Everett Independent, May 4, 2022
Greystar Real Estate Partners, LLC and Partners Group broke ground on 35 Garvey Street, a mixed-income transit-oriented development project. The project will comprise 427 market-rate apartments, 23 affordable units, a 564 space garage, and 6,500 sq. ft. of ground floor retail space. The project, which is set to be completed in 2024, will be located along the Silver Line extension, the Boston-area BRT line, and within a mile of the Chelsea MBTA Station.

FRANCE—New Law in France: Green Roofs on All New Commercial Buildings
Johnna Crider, CleanTechnica, May 5, 2022
The French government approved a law requiring all new commercial buildings to partially cover their roofs with plants or solar panels. According to the Environmental Protection Agency in the U.S., green roofs reduce heat islands, lower roof temperatures by 30-40°F compared to conventional roofs, and decrease building energy use by 0.7 percent, eventually lowering city-wide ambient temperatures by up to 5°F. Green roofs provide an annual savings of $0.23 per sq. ft. of roof surface.

INDIA—City’s 3rd Master Plan Factors in Carbon Footprint
Rudhran Baraasu, DT Next, May 5, 2022
Work on the Chennai Metropolitan Area’s third master plan includes efforts to address climate change and to specifically reduce the City’s carbon footprint through transit-oriented development. A recently issued amendment order called for compatible TOD along major transport corridors and the integration of pedestrian and cycling infrastructure. Chennai is located in southwest India on the Bay of Bengal, and is served by the Chennai suburban railway network and the Chennai Metro, which began service in 2015.