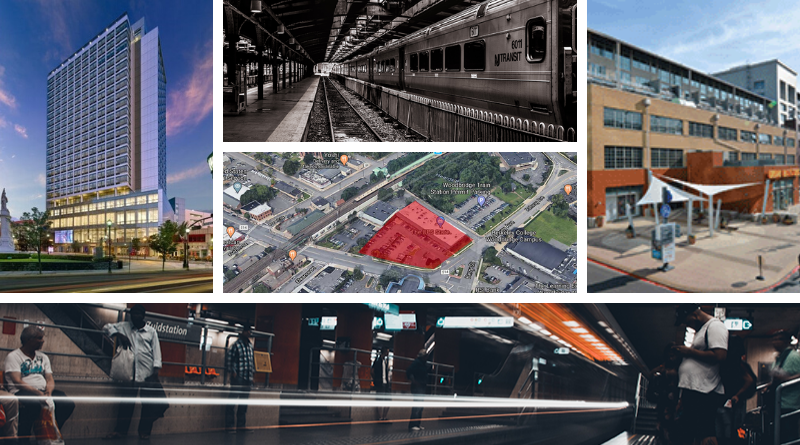 Seven-Story Mixed-Use Complex Planned Near Woodbridge Train Station
Jared Kofsky, Jersey Digs, April 3, 2020
The Woodbridge Township Planning Board is reviewing proposals for redevelopment of a defunct strip mall and parking lot located near Main Street and Rahway Avenue. Woodbridge 10 Main Urban Renewal, LLC has proposed Modera Woodbridge, a mixed-use complex comprising 279 residential units, multi-level parking garages, and 5,800 sq. ft of retail space. The property lies in the heart of downtown, between the NJ TRANSIT Woodbridge Station on the North Jersey Coast Line and the Woodbridge Municipal Complex. The developer has not yet received approval and permits to begin construction.

Virtual Presentation Drives Leasing at The Premiere Residences
Kevin Soto, Patch.com, April 2, 2020
Practicing social distancing? Premiere Residences, the housing component of the recently completed New Brunswick Cultural Center, recently launched a way for prospective renters to tour the building without leaving their homes: a fully immersive virtual presentation. Residential units, building amenities, and nearby locations will be available for virtual walk-throughs. The “live, work, play” development is near Johnson and Johnson and Rutgers University and is a five-minute walk to the NJ TRANSIT New Brunswick Station on the Northeast Corridor Line.

New Jersey Public Transportation Granted $1.75B in Federal Coronavirus Aid
Colleen Wilson, NorthJersey.com, April 2, 2020
NJ TRANSIT and the Port Authority of New York and New Jersey will receive up to $1.25B and $1.9B respectively in CARES Act funds from the Federal Transit Administration. The agencies are expected to file grant applications to receive reimbursement for costs and expenses during the COVID-19 crisis. Beyond compensation for farebox revenue deficits, agencies may also seek reimbursement for funds spent on hand sanitizer, cleaning products, and leave of absences for sick employees after January 1, 2020.

Transit Has Been Battered by Coronavirus. What’s Ahead May Be Worse.
Emily Badger, New York Times, April 9, 2020
As fewer and fewer people commute to work and as unemployment rises, transit fare revenue and alternative transit funding sources have begun to dry up. NY Times cities and urban policy reporter, Emily Badger, asserts that post-COVID mass transit in America will face a situation more dire than the period after the Great Recession — despite the $25B transit stimulus from Congress. Rescue funds are expected to run out quickly in these extraordinary circumstances — operations at the height of the lockdown are down to approximately 30 percent of normal — and transit agencies are still expected to make deep service cuts to adapt to the lack of revenue. At transit agencies across America, officials are working to keep these essential services running and preparing for the future when demand returns. Free registration is required to access article.

Navy Hopes to Build Major Development Near Pearl Harbor Base
Hawaii News Now, April 3, 2020
With a vision to add housing, shopping, and open space to its Pearl Harbor base in Hawaii, the U.S. Navy Acquisition Modernization Office presented its first proposal for a development project on Thursday. The proposed public-private partnership project will be built on a site located near a future rail station. The station forms part of the Honolulu Authority for Rapid Transportation’s plan for transit-oriented development involving 21 new rail stations. The request for proposals expires in August and negotiations with selected development partners are expected to start in 2021.

Redevelopment of Former MTA HQ To Generate $1B For Transit
Brendan Krisel, Patch Staff, April 3, 2020
Amid a pandemic, the MTA and New York City officials are pursuing a redevelopment deal that could raise approximately $1B for the transit authority. In 2016, the MTA approved a bid from Boston Properties to redevelop the site of its former Madison Avenue offices with a new office tower development. According to Janno Lieber, Construction and Development President for the MTA, “the new project will include a new entrance on Madison Avenue and a direct connection to the Grand Central [Terminal] and the new Long Island Rail Road terminal.”

Cities Should Take Advantage of Low Car Traffic to Accelerate Transit Construction
James Brasuell, Planetizen.com, April 2, 2020
All over the US, air quality in cities has shown dramatic improvement as drivers stay home and off the road. Beverly Hills is taking advantage of the lull in car traffic and speeding up construction timelines on the much-awaited Purple Line. The project will extend the subterranean service route of one of L.A.’s heavy rail lines. To accelerate the project, Beverly Hills as agreed to a complete closure of Wilshire Boulevard to cars.

Dallas Finally Seeks to Take Active Role in Transit-Oriented Development
Peter Simek, D Magazine, April 2, 2020
The Dallas City Council is moving forward with plans to create enabling policies and conditions for development around the city’s Mockingbird Station, a long-neglected transit-oriented development area, and to encourage more development near other stations along its light rail line. With 2,700 acres of vacant land around the station, Dallas Area Rapid Transit (DART) and the city envision new strategies to boost transit ridership, affordable housing, and urban redevelopment in downtown Dallas. In order to correct the course for Mockingbird Station and other TOD initiatives in the metro area, the Dallas City Council may first need to establish clear policy goals that will measure the effectiveness of TOD, capture the value created by the development, and then reinvest that value in the city’s public transit service.

Here’s What Our Cities Will Look Like After the Coronavirus Pandemic
William Fulton, Rice Kinder Institute for Urban Research, March 26, 2020
The Rice Kinder Institute for Urban Research released a two-part series exploring the long-term implications of the COVID pandemic on the average American city. In his musings about the cultural changes that cities may face after the mandatory lockdown, author William Fulton emphasizes the revival of urbanism and a renewed appreciation for proximity. With more sophisticated urban design and land-use applications, cities can change how people live, work, and travel and redefine how streets and public areas can become social and cultural spaces. Cities may also need to focus on public health and improve system resiliency to respond quickly to future pandemics.

INDIA – India has closed its railways for the first time in 167 years. Now trains are being turned into hospitals
Hema Ramaprasad, CNN World, April 6, 2020
On March 25, Prime Minister Narendra Modi announced a nationwide lockdown effectively suspending Asia’s oldest rail network for the first time in 167 years. With the shutdown, has come a repurposing of the system as the Indian Railways converts approximately 20,000 train carriages into isolation wards for COVID-19 patients. Following sanitization, the carriages are being sent to locations that need support as positive cases continue to grow in the nation. Each carriage accommodates up to 16 patients and contains a nursing station, a doctors’ cabin, and space for medical equipment and supplies. This hospital-on-wheels operation is the result of the collaboration of the Indian Railways, the Indian Health Ministry, the Institute of International Finance, Impact India Foundation, and the Lifeline Express, a project launched in 1991.

GLOBAL – 3 Ways Transportation Systems Are Adapting to the Coronavirus Crisis – and What We Can Learn
Sandra Caballero and Maya Ben Dror, World Economic Forum, March 26, 2020
The World Economic Forum released recommendations for three distinct ways that transportation systems have changed since the start of the coronavirus crisis: the more integrated movement of goods and people, the loss of “public” and “private” mobility, and intra-modal and inter-modal commutes. As buses and cars are used more and more for community actions and on-duty first responders rely on micro-mobility, the WEF argues that transit remains the backbone of urban mobility and the “lifeline of the movement of people.” As the crisis continues, it is clear that ensuring efficient urban mobility systems that serve varying needs plays a large role in emergency preparedness.

January 20, 2008 Steph_Admin Comments Off on Redevelopment Plans for Beverly and Edgewater Park