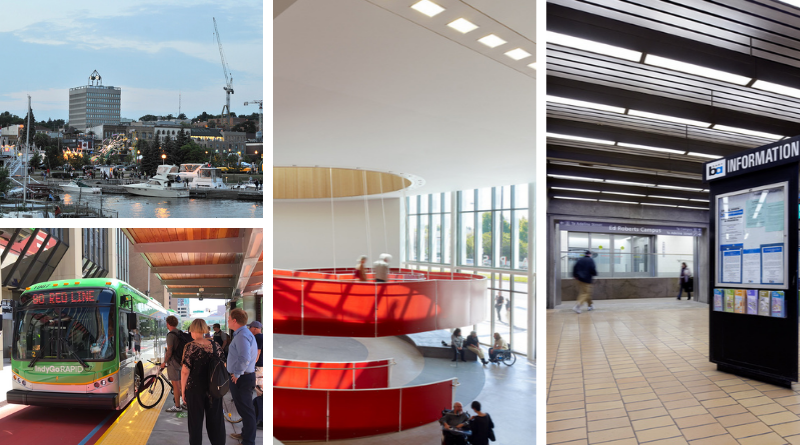 DISTRICT OF COLUMBIA—The Washington, DC Region Has Built Too Much Housing in the Wrong Places
Jenny Schuetz and Matt Ring, Brookings Institution, August 18, 2021

An analysis of long-term housing growth in the Washington, D.C. metropolitan region found that, while denser, multifamily housing was on the rise, overall housing production had slowed significantly, giving rise to affordability concerns. At the same time, dispersed development continues in exurban locales, far from transit and the region’s jobs. The authors attribute the lack of concerted “smart growth” in transit-rich areas and job centers to regulatory and political efforts by affluent communities.

CALIFORNIA—Caltrain to Run More Service than Ever, Cut Fares 50%
Caltrain News, August 13, 2021
In order to meet the needs of a returning workforce, the Bay Area commuter rail service CalTrain announced a new schedule, exceeding pre-pandemic service levels, including four trains per hour during the morning and evening peak times. Additionally, individual fares have been discounted by 50 percent for September, to attract new riders to the service. Caltrain’s weekday ridership currently stands at 12 percent of pre-pandemic figures.

GARFIELD—79-Unit Meridia Development Proposed Across from Dundee Dam in Garfield
Jared Kofsky, Jersey Digs, August 18, 2021
Developer Capodagli Property Company has proposed to construct a 79-unit transit-oriented development in Garfield, within close walking distance of the municipality’s NJ TRANSIT station. The developer has applied to the Garfield Planning Board for a reduced parking requirement.

NEWARK—City Planning Board Approves 52-Unit, Education Center Project for West Ward
Tom Wiedmann, Tap Into Newark, August 17, 2021
The Newark Planning Board gave approval to RPM Development Group to construct a five-story, mixed-use building consisting of 52 affordable housing units, a community space, and an early childhood education center. The project is part of the broader Fairview Commons Redevelopment Plan, which requires that a portion of the units be sold to families making 65 to 75 percent of Area Median Income (AMI).

HOBOKEN—LCOR Has a Team to Redevelop Lackawanna, But Still Short on Plans
Real Estate Weekly, August 16, 2021
Developer LCOR announced that it had assembled a team for a one million sq. ft. redevelopment of a railyard adjacent to NJ TRANSIT’s Lackawanna Terminal. The project will involve flood mitigation measures for the rail terminal, as well as two residential towers with ten percent of units reserved for affordable housing. In addition to private firms, NJ TRANSIT and the City of Hoboken are participating on the development team.

SOMERSET COUNTY—Apartments Along NJ Transit’s Raritan Valley Line in Somerset Celebrate Grand Openings
Mike Deak, MyCentralJersey, August 13, 2021
The Raritan Valley Line saw two new luxury TODs open in August: the Station House in Somerville, and the Crossings at Raritan Station in Raritan. The article characterizes the current wave of development on the Raritan Valley Line as reflecting hopes of an imminent one-seat ride to Manhattan, which would be contingent on the construction (and funding) of the Gateway Hudson River tunnel project.

Creating More Accessible, Inclusive Buildings
Hadriana Lowenkron, Bloomberg CityLab, August 18, 2021
More expansive than the minimum requirements of the Americans with Disabilities Act, Universal design (UD) is calls for constructing spaces and places that accommodate people of varying abilities. Models for such development include Sweetwater Spectrum and the Ed Roberts Campus, which is regarded as one of the most accessible office buildings in the country, with amenities such as automatic doors, a spiraling ramp, and wayfinding features for the visually impaired. The Campus was constructed at the Ashby BART Station in Berkeley, providing a variety of transportation options. Other examples of UD include the Musholm resort and House of Disabled People’s Organisations in Denmark and Vindmøllebakken, an accessible co-housing community in Stavanger, Norway, designed via an intensive engagement process.

TENNESSEE—Lebanon Transit-Oriented Development Plan Submitted for 198 Apartments, Townhomes
Andy Humbles, Nashville Tennessean, August 19, 2021
A conceptual plan for 180 apartments and 18 townhomes, to be built adjacent to a future rail station in Lebanon, Tennessee, was submitted to the City of Lebanon Planning Department. The Regional Transportation Authority (RTA) had designated an extension of the Music City Star commuter rail for the area in its thirty-year plan, but no serious progress has been made. Although the area for the development is zoned for TOD, the development must still be approved by the Lebanon City Council.

Re-imagining Stations as the Center of Sustainable Urban Life
Gillian Blake, Mass Transit, August 17, 2021
This article envisions commuter rail stations as “amenity-rich, multifunctional facilities, which address a spectrum of work/life needs.” For example, New York City’s Fulton Center was designed as a destination, consisting of a large atrium lined with retail offerings. Another is the development of the Kings Cross District in London, an industrial area transformed into a vibrant mixed-use district, centered upon the redevelopment of Kings Cross Station.

The American Alley, Part 1: A Hidden Resource
Thomas Dougherty, Strong Towns, August 16, 2021
The author describes how urban alleys, originally built to keep certain uses out of the public thoroughfare, are often neglected and underused but can provide opportunities for ‘gentle’ development. Chicago, for example, contains 1,900 miles of alleys. With a renewed emphasis on Accessory Dwelling Units (ADUs), these access ways and those found in cities throughout the U.S. could add density in a context-sensitive manner.

INDIANA—Transit-Oriented Development Goal of Zoning Amendments
Jill Sheridan, WFYI, August 15, 2021
The Indianapolis City-County Council passed amendments to a zoning ordinance intended to promote TOD through the creation of overlay areas along rapid transit corridors. Indianapolis has two Bus Rapid Transit (BRT) lines, and another in the planning stage. The Department of Metropolitan Development must still approve these changes.

UNITED KINGDOM—Americans “Can’t Fathom” How Much People in the UK Walk
Saman Javed, The Independent, August 19, 2021
Can a 30-minute walk be considered a “short walk”? That is the debate that has recently arisen between US and UK residents in the online Reddit community. Sparking nearly 8,000 comments (as of Aug 20), issues of pedestrian infrastructure, driver behavior, land use, distance, and mass transit—as well the impacts of auto-dependence on health—have all figured in the conversation.

CANADA—The Power of Our Urban Constellation
Drew Sinclair, Building, August 16, 2021
The Canadian architect and planner Drew Sinclair argues that Southern Ontario should consider the “constellation” of urban centers near Toronto, to create tight-knit civic clusters connected by transit. Building off the examples of the Emilia-Romagna region in Italy, as well as the Netherlands “distributed urban network,” Sinclair makes the case for imagining small, interconnected cities as more than bedroom communities.

AUSTRALIA—Wee Hur Lodges $400m Mixed-Use Plans
The Urban Developer, August 12, 2021
As part of the second stage of the Buranda TOD in suburban Brisbane, developer Wee Hur Holdings will construct four buildings, including one targeted toward students, and another for elder care (or “aged care” as it is known in Australia). According to the developer, “There’s lots of synergies between student accommodation and aged care.”

The High Cost of Free Parking

November 26, 2005 Steph_Admin Comments Off on The High Cost of Free Parking