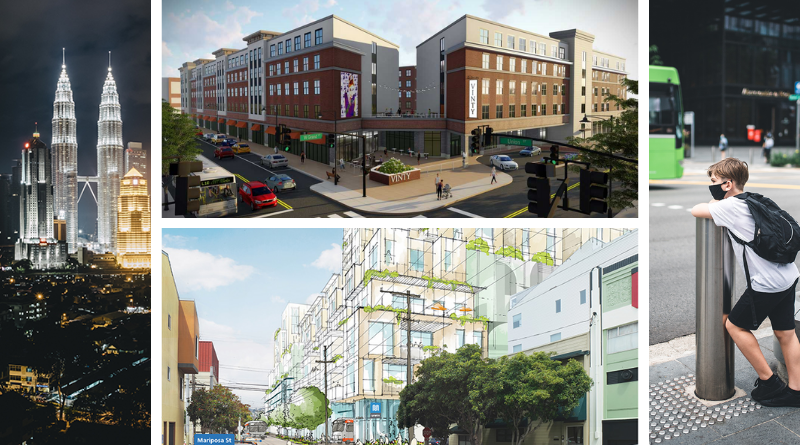 M.T.A. Warns of Doomsday Subway Cuts Without $12 Billion in Federal Aid
Christina Goldbaum, New York Times, August 26, 2020
As the New York MTA struggles to recover financial losses from decreased ridership and a staggering increase in operational costs, the agency is on the brink of deploying a doomsday plan to reduce bus and train operations by 40 percent. Without a $12B aid package requested from Washington to cover deficits through 2024, the MTA will have to cancel much-needed subway and bus service upgrades and run services at reduced capacity. Reduced operations would result in more packed trains and vehicles, exacerbating the risks of spreading the coronavirus and fundamentally impairing mobility and accessibility for riders. The plan would increase fares and tolls above already scheduled increases, and would halt a program that provides accessible vehicles on demand to paratransit riders. The effects of this move will be felt in the decades to come.

COVID-19 is Forcing Public Transport to Flex
Sarah Wray, Cities Today, August 26, 2020
Six months into a global pandemic, cities and transit agencies face unprecedented challenges in maintaining ridership and operating public transport systems. The Cities Today Institute recently conducted a virtual roundtable, highlighting how cities have had to overturn mobility norms. More and more cities are investing in multi-modal transportation and active transportation infrastructure, focusing on accessibility and flexibility. For fixed transit, agencies are adopting booking systems to avoid overcrowding and offering on-demand services and ticket flexibility. These innovative changes come as agencies try to shift away from bureaucratic barriers and adopt a new-found environment for collaboration among their personnel and city officials who are eager to use any and all tools to provide safe and reliable mobility options to their constituents.

FTA COVID-19 Recovery Discussion Forum
US Department of Transportation
The US Department of Transportation recently launched an FTA COVID-19 Recover Discussion Forum, a platform for peer-to-peer exchange of transit ideas and discussion of best practices in cities all over America. It is open to anyone interested in posting questions, comments, or ideas and gives interested parties a space to offer or request resources. The discussion board allows users to vote on their favorite topics to highlight the most pressing concerns during the FTA’s COVID-19 Recovery Listening Sessions.

7-Story Parking Garage and Mixed-Use Building Under Review at Jersey City Planning Board
Matthew Cunningham, Hoboken Girl, August 26, 2020
The Jersey City Planning Board is reviewing a Central Avenue redevelopment plan for a mixed-use complex and multi-level parking garage. The seven-story development includes retail, commercial, and residential spaces, with 400 public parking spaces and a 10,000 sq. ft. public pedestrian plaza. The development is expected to comprise about 190 residential units. If approved, the project will come before the Jersey City City Council for final approval.

14-Story High Rise Designed by MHS Architects in Hoboken, NJ Lease 80% of its 424 Luxury Apartments
Archinet.com, August 21, 2020
Residential tower 7 Seventy House is one of the latest additions to Hoboken’s “Gold Coast” by Hudson River. The 14-story rental apartment building on Jackson Street was a collaboration among MHS Architects, developer Bijou Properties, and Intercontinental Real Estate Corporation. The site sits by a two-acre resiliency park, a multi-purpose outdoor plaza, a community gym, and NJ TRANSIT’s 9th Street Light Rail Station. The City of Hoboken has been intensifying efforts to build transit-oriented development and maximize access to Manhattan via PATH, NJ TRANSIT, and cross-Hudson ferries.

City Native Spearheading Long-Awaited Redevelopment at Elizabeth Transit Site
Joshua Burd, Real Estate New Jersey, August 21, 2020
The City of Elizabeth is looking forward to the development of  Vinty, a mixed-use building bringing 267 residential units and 36,000 square feet of office, retail, and entertainment space to the corner of Union and West Grant Streets. An Elizabeth native, developer Sal Garcia of MAS Development Group, took a personal interest in the long-vacant 2.5-acre parcel across from the city’s NJ TRANSIT rail station; he paid $2.5M for the property and entered into a PILOT agreement with the city. The $75M project is expected to open in the spring of 2021, coinciding with the $71M upgrade to the station. Renovations to the station are expected to be complete in 2022.

Scotch Plains Council Meets Outside, Approves ‘Overlay Zones’ to Increase Density Downtown
John Mooney, TapInto.com, August 21, 2020
The Scotch Plains City Council voted to support densification and downtown redevelopment when it unanimously approved “overlay zones” in three sections of its downtown area. Tom Strowe, Scotch Plains downtown redevelopment coordinator, emphasized that densification is not mandatory, but overlay zones give property owners more options for redevelopment. In its next steps, the city hopes to focus development in the downtown area by increasing affordable housing in the center of town.

MONTANA—Developers Turning to New Zoning Tool in Proposed Third Street Apartment Project
Martin Kidstron, Missoula Current, August 24, 2020
University Avenue Developers is appealing to Missoula city government to apply an “adaptive reuse overlay” on the site of an historic apartment building in the city’s McCormick Historic District. Project proposals detail plans to preserve important elements of the century-old building and build six additional units to the structure. Residents have expressed concern that increasing the number of housing units would exacerbate tensions over limited parking space in the neighborhood. City Planner Emily Gluckin notes that parking reductions are allowed based on the property’s location near a transit line and in an historic district.

CALIFORNIA—The SFMTA Launches Next Phase of Country’s First Mixed-Use Bus Yard
San Francisco Metropolitan Transit Authority, August 21, 2020
The San Francisco Municipal Transportation Agency (MTA) released a Request for Qualifications (RFQ), initiating the selection process of a developer for the much-awaited Potrero Yard Modernization Project. The Potrero bus yard is the second oldest facility in the Muni system, according to Director of Transportation Jeffrey Tumlin, and the city has been looking forward to redeveloping the site into a three-story bus maintenance and storage facility with more than 570 rental units of affordable housing. The project will address two of the Bay Area’s most critical issues: the provision of modern, safe, and reliable transit services, and the creation of more affordable housing options.

CONNECTICUT—$18M Berlin Transit-Oriented Development to Begin After Land Deal
Joe Cooper, Hartford Business, August 19, 2020
After completing the purchase of properties on Farmington Ave., developers Newport Realty Group LLC can break ground and begin redevelopment of Steele Center, a planned TOD project just across from the Berlin Train Station. The $18M complex will include five buildings dedicated to apartments, medical offices, restaurants, and retail space with access to the CTrail commuter service on Connecticut’s Hartford Line from New Haven to Springfield.  Construction will be funded by grants from the Connecticut Department of Transportation, the Office of Policy and Management, and the Department of Economic and Community Development. After three phases of construction, the entire project is set for completion in 2022.

SAUDI ARABIA—PROJECTS: Saudi Arabia Plans Waterfront Transit-Oriented Development
Senthil Palanisamy, ZAWYA/Transport, August 27, 2020
Halted in 2018 due to the country’s economic slowdown, plans to construct a waterfront transit-oriented development in the City of Jeddah will be revived. The Jeddah Metro Company had sought expressions of interest for consultancy services. In July 2020, the company renewed is efforts, and is expected to reissue its request for bids by the end of the year, with work starting in February 2021. The $300 million project is scheduled to be completed by December 2024, and will comprise construction of four ferry terminals, 18 water taxis, salvage and infrastructure works, and associated facilities.

MALAYSIA—Cover Story: Special MRT2 (Putrajaya Line) Coverage | Part 3: KLCC and Neighbouring Areas to Get Boost from MRT Line
Hannah Rafee, The Edge Malaysia, August 25, 2020
As Phase 1 of the Putrajaya Line (the second line of the Klang Valley mass rapid transit (MRT) project) nears its anticipated completion in July 2021, Kuala Lumpur City Centre (KLCC) and the region are preparing for increases in property values and development. The MRT line will serve a corridor that is home to about two million people. The work will result in 35 stations (11 are interchange stations) and an overall alignment of 52.2km. Plans call for pedestrian improvements and transit-friendly land measures near stations. For example, land owners with properties within 500m of an MRT or LRT station will be able to develop more intensely (increased plot ratio) and be eligible for reduced parking requirements. Developer interest has remained strong throughout the pandemic. [This article first appeared in City & Country, The Edge Malaysia Weekly, on August 17, 2020 – August 23, 2020.]

May 28, 2006 Steph_Admin Comments Off on Municipal Spotlight: Collingswood, The Comeback City