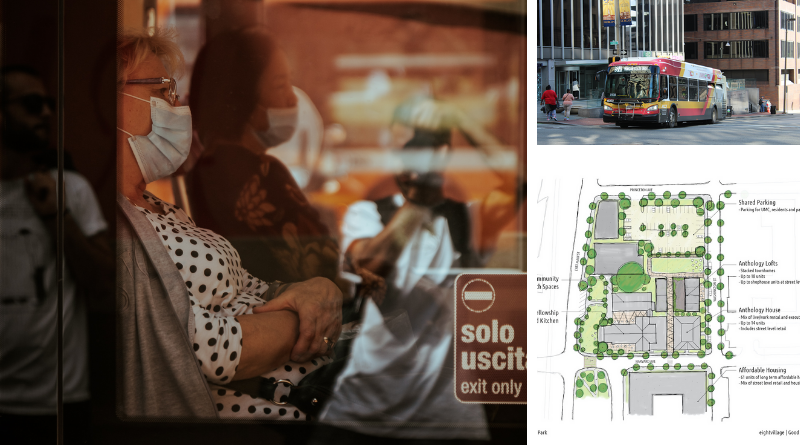 Mixed-Use Destinations Must Be Redesigned for Post-Pandemic World
J.F. Finn and Duncan Paterson, REBusiness Online, September 3, 2020
Finn and Paterson, principals at the architecture and design firm, Gensler, explore the need for human interaction beyond virtual gathering, and the vital role that public spaces will play in bringing people together and promoting health and well-being. They discuss how modular building can help meet the need for pop-up, flexible, and adaptable spaces during the pandemic and beyond, and how designers must adopt practices that support healthy buildings that introduce outside air and provide safer and cleaner shared environments. Moreover, they foresee a resurgence in “self-sustaining” districts—places that maintain a high level of functionality without drawing on distance resources.

Public transportation is getting crushed by the coronavirus. Will it come back?
Petula Dvorak, The Washington Post, September 3, 2020
Life for public transit riders may be getting a whole lot more difficult. Throughout the U.S., transit agencies have had to make the difficult decision to cut services, and the cuts are likely to increase in the future. As we move past the six-month point of the pandemic, Dvorak examines the impact of transit cuts within the context of institutional racism and discusses how the cuts affect the transportation-disadvantaged—seniors, people of color, people with disabilities, and low-income individuals—who depend on public transportation to commute to jobs as essential workers and to meet their daily needs.

Your Children Are No Safer in the Suburbs: Fewer People Die Because of the City’s Mass Transit
Nathan Newman, New York Daily News, September 2, 2020
While much has been made of the dangers of urban living including, most recently, riding public transit during the pandemic, Newman explores a demonstrably more dangerous form of transportation, travel by car. He argues that suburban living, which nearly always requires the use of a personal vehicle, places people at a much higher risk of injury or death than living in an urban place and utilizing public transportation. Newman’s position can be viewed in the context of the recent exodus of urbanites from the city to suburban and rural places.

MTA Proposes Service Changes Due to Decline in Ridership Amid Coronavirus
David Collins, WBALTV.com, September 1, 2020
On Tuesday, the Maryland Department of Transportation released its draft capital budget for FY2021-2026, which includes major cuts due to the coronavirus, including at the Maryland Transit Administration (MTA). Under the proposal, several MARC trains could be cut as well as a number of bus routes. The MTA plans to hold 10 virtual public hearings on the proposed changes to local bus routes and service, scheduled from October 5th-16th as part of a 30-day public review and comment period that will end on November 15th.

New Yorkers Are Fleeing to the Suburbs: ‘The Demand Is Insane’
Matthew Haag, The New York Times, August 30, 2020
Realtors in the New York City suburbs, which include New Jersey, Westchester County, Connecticut and Long Island, have reported a large upswing in demand for homes at all price levels. According to Miller Samuel Real Estate Appraisers & Consultants, a real estate advisory firm based in Darien, Connecticut, home sales have experienced a 44 percent year-over-year increase. Reportedly, suburban demand has been driven in part by the ability to work remotely as well as uncertainty about the city’s capacity to recover from the pandemic. Many buyers profess that they are looking for their own outdoor space in the form of yards.

Raritan Mayor Introduces Downtown Raritan Project, Hopes for Revitalization of Main Street
Audrey Blumberg, TAPinto the BReeze (Bridgewater and Raritan’s News), September 2, 2020
The nature of public meetings may have changed, but with change come new opportunities. Recently, Raritan Mayor Zachary Bray used Facebook Live to walk residents through the streets of the borough to introduce the Raritan Sustainable Economic Development planning effort. The borough is using support from the area’s metropolitan planning organization (MPO), the North Jersey Transportation Planning Authority (NJTPA) to create a community-driven plan to guide future investment via transit-oriented economic development in the borough’s downtown. The 18-month planning process, which will run through June 2021, will strive to create a sustainable economic development plan, position the downtown to better address the long-term impacts of COVID-19, identify places to be protected or transformed and assets the borough can build on—all with the goal of making Raritan a desirable and sustainable destination. Public involvement will include a survey on the Downtown Raritan website as well as virtual workshops, and outreach to non-English-speaking residents.

Application Calls for Bringing 90 Residential Units to East Orange Office Building
Jared Kofsky, Jersey Digs, September 1, 2020
The East Orange Planning Board has received an application for the adaptive reuse of an office building located a few blocks north of the Brick Church Station, which is on the NJ TRANSIT Morris and Essex Line. Plans for converting the six-story building at 55 Washington Street call for an eight-story structure with 90 residential units. The building formerly housed the East Orange Board of Education.

Procida Closes $52.5 Million Construction Loan for 214-unit Hudson County Project
Joshua Burd, RealEstateNJ, August 31, 2020
Well-established builders, the Demetrakis family, have received notice of a $52.5 million construction loan from Procida Funding, which will support a planned 214-unit apartment development in North Bergen. The project, to be known as the Manhattan Transit Village North Bergen, will be adjacent to the Hudson-Bergen Light Rail’s Tonnelle Avenue Station between 49th and 51st streets. When completed, the project will comprise a mix of studio, one-bedroom and two-bedroom rental units in four buildings.

GEORGIA—College Park’s 125-Year-Old First United Methodist Church to Get Mixed-Use Overhaul
Caleb J. Spivak, What Now Atlanta, September 2, 2020
The City of College Park, located just north of Atlanta’s Hartsfield-Jackson Airport, has announced plans for a new affordable housing and arts community to be built in its downtown, on a surface parking lot adjacent to the MARTA College Park Transit Station. The project, known as The Diamond @ College Park, will comprise up to 14 townhomes, 18 lofts, retail space, and 61 housing units with a mix of affordable, market, and above market options. The project is the result of a partnership with the First United Methodist Church.

NEW YORK—New Affordable Housing in The Bronx Is Designed for Both Seniors and Teens
David Malone, Multifamily Housing, September 2, 2020
Home Street Residences, a 75,000-sq. ft. low-income housing development, was conceived primarily for seniors, but building plans also include a community space with a teen support and video gaming center. Located at 1017 Home Street on Freeman Square in the Foxhurst section of the Bronx, the building comprises 63 affordable apartments, of which 30 percent are allotted to formerly homeless seniors and the rest to low-income seniors and families. The building is located adjacent to the Bx11 bus route and less than a quarter mile from the Freeman Street Station, with service on the 2 and 5 subway lines.

UTAH—Ogden City Council Passes Sweeping, Ambitious Master Plan for Downtown Area
Mitch Shaw, Standard-Examiner, September 2, 2020
Recently the Ogden City Council unanimously adopted the “Make Ogden” downtown master plan, which is designed to serve as a blueprint for growth and expansion over the next 25 years. The plans call for nearly 5,000 new housing units, 7,000 new jobs, 1,000 new hotel rooms and 4,500 new parking spaces, to be implemented in four phases through 2045. One focus of the plan calls for an expansion of the Ogden Eccles Conference Center and mixed-use building around the FrontRunner Station, as well as upgrades to the 100-year-old Union Station.

TEXAS—Austin Plans Big Investment to Help Stop Residents from Getting Forced Out by Any New Transit Lines
Samuel King, KUT Public Radio, August 31, 2020
If approved by the voters of Austin, property taxes will rise to pay for Project Connect, a planned transit expansion that includes the construction of new train and bus lines. However, increased access—the kind that improves the desirability of a location—can result in current residents being priced out of their neighborhood. To address this problem, the proposal to be voted upon includes $300 million devoted to measures to prevent displacement, including: the construction of new affordable housing; preservation, repair and rehabilitation of existing affordable housing; financial assistance for home ownership; rental subsidies; and right-to-return assistance for current tenants.

CANADA—If We Want Affordable Housing, the Numbers Must Work for Everyone
Naama Blonder, Real Estate News Exchange, September 2, 2020
Blonder explores the goals of Toronto’s Housing Now initiative, which is designed to increase the supply of new affordable rental housing within mixed-income, transit-oriented communities on city-owned lands, as well as some of the forces working to impede its success. The “Housing Now” effort aims to bring 40,000 new homes, including 18,000 supportive homes (i.e., affordable housing with onsite services), to the city over the next 10 years. To support this work, the initiative expedites the development process by shortening approval timelines and offering financial incentives via the city’s Open Door Program for affordable rental units. The city has also made land available for development through 99-year ground leases.

TOD and Complete Streets Work Together

July 31, 2011 Steph_Admin Comments Off on TOD and Complete Streets Work Together