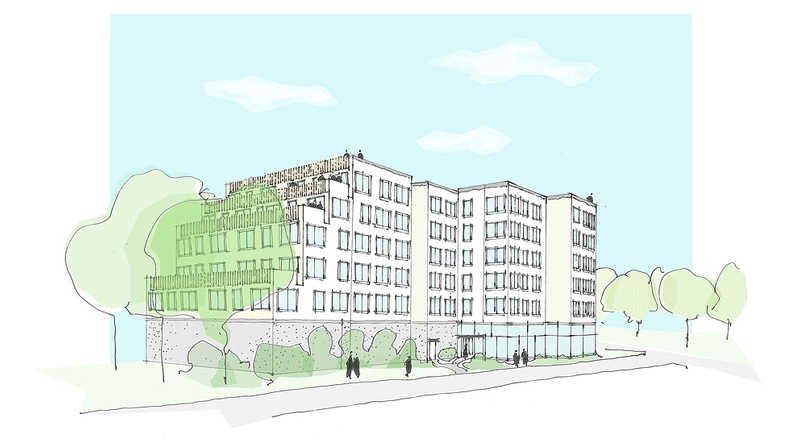 East Orange Developer Details Plan for 201-unit Apartment Tower
Joshua Burd, Real Estate NJ, December 24, 2018
Blackstone 360 LLC reports approval of a PILOT agreement by East Orange City Council and now plans to start construction of an 18-story, 201-unit residential complex. The new Allure 260 project will increase the developer’s investment in the Transit Village of East Orange to $150 million. Once the complex is built, the City will see a tenfold increase in tax revenue on the property over its current taxation.

The PATH Train Loses $400 Million a Year. Why Keep Spending Billions on it?
Patrick McGeehan, The New York Times, January 2, 2019
Over the past decade, the PATH has seen a steady increase in ridership as developers build around its stations. Despite this, the Port Authority is on track to lose $400 million this year as the agency has no power to levy taxes to cover costs and instead must raise fares. Cities like Harrison, NJ are seeing station improvements and development around the local PATH station, but Port Authority has not been able to harness any additional revenue from businesses in the vicinity of stations. People continue to move to cities that host a PATH station, but without a method to bring in revenue, fare increases and overcrowded rush hour trains will continue to detract from the system’s appeal.

7-Phase Redevelopment Plan Approved for Newark’s Riverfront Square
Jared Kofsky, Jersey Digs, January 3, 2019
Newark’s Municipal Council has signed an agreement with an LLC owned by Lotus Equity Group for a seven-phase Riverfront Square complex that will include residential, office, parking, retail, hotel, and conference space, as well as pedestrian plazas. The land for the development is owned by numerous entities, including the LLC itself and NJ TRANSIT. Following demolition and the issuance of permits, Phase 1 is expected to take three years to complete.

DC Metro Opens Door to Bikes During Rush Hour
Angie Schmitt, StreetsBlog USA, January 2, 2019
In an attempt to increase ridership numbers and appeal to the first/last mile needs of commuters, Metro has changed its policy to allow bikes on trains during rush hour. Previously, bikes were not allowed on trains between 7-10 am and 4-7 pm, but upgrades to the system have brought more spacious cars and longer trains that can more easily accommodate riders with bicycles. The Washington Area Bicyclists Association predicts that the biggest benefits of the rule change will be found by people who live or work within one mile of a Metro station.

Bader Buy Connects Calhoun Towers to Transit, Affordability
Matt M. Johnson, Finance & Commerce, January 3, 2019
744-units will be added to the Calhoun Towers complex in Minneapolis, on a 0.93-acre parcel purchased by Bader Development from the Hennepin County Housing and Redevelopment Authority. Twenty percent of the units will be affordable at or below 50 percent of the region’s AMI and 20 percent will be affordable at 60 percent or less. The extension to the building will connect the property to the future West Lake Light Rail station, a local greenway, and retail establishments in the neighborhood.

Greenville County Gets Transit-Oriented Development Planning Grant
Cindy Landrum, Greenville Journal, January 3, 2019
Greenville County, SC has received an FTA Pilot Program for TOD Planning grant to study a potential fixed-rail system along the Laurens Road corridor between downtown Greenville and the City of Mauldin. The $355,000 grant requires the county to consider potential economic development, ridership, connectivity, access, private sector engagement, and mixed-use development opportunities in its analysis of the system. In total, the FTA awarded $16.6 million to 20 local entities across the country for TOD studies.

Deal for Orange to Buy Train Station Property Derails
Pam McLoughlin, New Haven Register, January 3, 2019
The State of Connecticut has reallocated a grant originally meant to purchase TOD-zoned land in the Town of Orange. The town and state were unable to agree on land use terms; the state insisted the parcel must remain zoned as TOD in anticipation of a new train station, while Orange town officials wanted to use it for light industrial purposes. The $700,000 per-acre price was considered to be significantly above market rate, although neighboring properties have seen an influx of development due to the potential train station, which has now been removed from the state budget.

New Downtown San Jose Residential Project Would Include Affordable Units and Homes for Disabled People
George Avalos, Bay Area News Group, January 3, 2019
A 111-unit apartment building has been proposed for a downtown site in San Jose adjacent to the Ayer light rail stop, a short ride from the Diridon train station and two future downtown BART stations. The complex will include market-rent units, affordable units significantly below the region’s AMI, and units set aside for residents with developmental disabilities. The developer, The Kelsey, hopes that Google’s new transit village will bring jobs and extra opportunities to the area as well.

April 25, 2010 Steph_Admin Comments Off on Moving Forward in Pleasantville