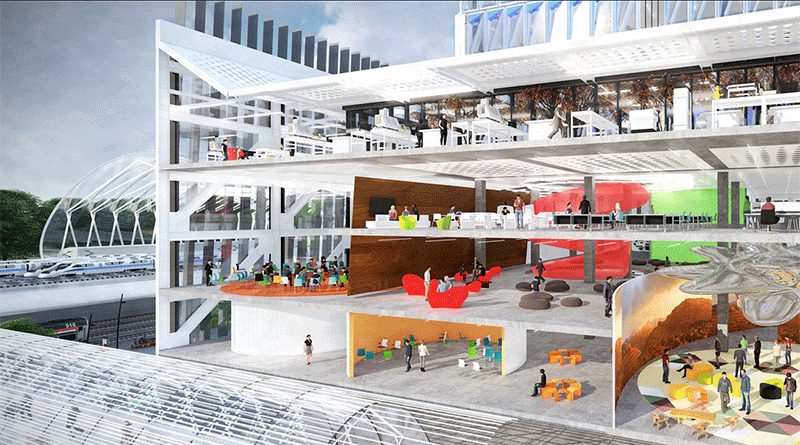 Dem’s Parking-Tax Proposal Almost Stalls in Assembly, Despite Party’s Majority
John Reitmeyer, NJSpotlight, February 26, 2019
On February 25, a proposed tax on parking fees in municipalities with more than 100,000 residents—Edison, Elizabeth, Jersey City, Newark, Paterson, and Woodbridge—passed the NJ Assembly by one vote. The taxes collected would be used to pay for pedestrian improvements at transit stations, including bridges, tunnels, walkways, elevators, and other accessibility projects. Eligible municipalities would be given the option to institute the 3.5 percent levy on parking fees if the bill passes the Senate, but they would not be required to do so.

The really bad things that would happen if a Hudson River rail tunnel closed (even if you don’t use NJ Transit)
Larry Higgs, NJ.com, February 27, 2019
A new report from the Regional Plan Association explores the impacts of shutting the current Hudson River tunnel down without building a new one under Gateway. A Preventable Crisis – The Economic and Human Costs of a Hudson River Rail Tunnel Shutdown indicates national and regional economies will suffer from the 38,000 commuters displaced from NJ TRANSIT trains to other methods of transportation. Additionally, property values around NJ TRANSIT lines will drop between $8,000 and $30,000 and highway commute times will increase by at least 30 minutes.

Leonia Residents Turn Out to Express Concerns about Eminent Domain
Katie Sobko, North Jersey Record, February 27, 2019
On January 15, property owners on Fort Lee Road in Leonia received notices from the Borough that their properties may be taken by the Borough under eminent domain if the area is determined in need of redevelopment. The properties are within the area of the proposed Leonia Station of the Hudson Bergen Light Rail extension. Mayor Judah Zeigler has stated Leonia officials have no intention to use eminent domain to take property from residents, but before conducting the redevelopment study, the Borough was required to mail out the letters.

New Brunswick Approves New 55-Unit Apartment Building
Tom Haydon, TAPintoPiscataway, February 28, 2019
The New Brunswick Zoning Board has approved developer Joseph Chedid’s variance request for a four-story apartment building on Hamilton Street, which will consolidate four lots and remove four existing homes. The 55-unit building will have only 52 parking spaces, less than half the amount required by the City. The Zoning Board unanimously approved the project with this variance, citing its close proximity to the NJ TRANSIT New Brunswick Station and the City’s Complete Streets policy, which encourages residents to find alternatives to vehicle use.

Developer Steve Minn Talks about Making Affordable Housing Work
Jim Buchta, StarTribune, February 23, 2019
In this interview, developer Steve Minn, CFO and co-owner of Lupe Development Partners, an active affordable housing developer in the Twin Cities, discusses how his company utilizes transit to facilitate affordable housing development. Lupe has produced 1,200 affordable units in the past 8 years, with most recent work located in transit corridors. Building in transit corridors brings costs down though reduced parking, which with a regional cost of $25,000 per space is the second largest project cost following property taxes.

Progress: Officials See a Link Between Transit and Economic Development
Curt Yeomans, Gwinnett Daily Post, February 24, 2019
In the last weekend of February, the League of Women Voters of Gwinnett County hosted a transit forum with discussion focused on bringing MARTA access to the region. In the past few years, major companies have relocated from Gwinnett County to other areas in the Atlanta Metropolitan region that are developing TODs around the MARTA system. The Gwinnett Chamber’s Board of Directors has voted to endorse a measure up for referendum on March 19. If approved, the measure would ratify the county’s pending contract with MARTA and raise sales taxes by 1 percent through 2057 to fund a four- to five-mile extension of the Gold Line from Doraville into Gwinnett County.

‘No small job’: Sam Zimbabwe Confirmed as New Seattle Transportation Director
Heidi Groover, The Seattle Times, February 25, 2019
Sam Zimbabwe, most recently the chief project delivery officer at the Washington D.C. District Department of Transportation, has won confirmation from the Seattle City Council to head the city’s Department of Transportation. Zimbabwe, who earned a master’s in city planning and urban design from UC Berkeley, spent two years as the Director of the Center for Transit-Oriented Development at Reconnecting America. In his new position, Zimbabwe will supervise two projects undergoing major scope, budget, and schedule adjustments: the downtown streetcar and the Move Seattle levy.

Schools Near Transit Harness Connectivity Benefits
Lisa Brown, GlobeSt.com, February 28, 2019
LPA Inc., an architecture firm based in California and Texas, has developed a TOD model that implements a school campus in its plan. Helen Pierce, LPA’s associate and design director, believes that transit will enhance the educational experience by providing easy access to off campus learning opportunities, partially substituting for regular classrooms. Additionally, employers within the TOD can recruit parents who wish to work close to where their children attend school.

‘TOD Only Way for Tehran to Survive Air Pollution’
Mehr News Agency, Tehran Times, February 23, 2019
The secretary of Tehran City Council’s TOD committee, Afshin Khezrloo, has proposed solutions to the air pollution problems that plague the city. He states that public policy should encourage residents to use Tehran’s public transportation system and facilitate housing and commercial development around transit. He estimates that creating 300 TOD zones in the city would cost about US$1.1 billion, compared to the annual $2.9 billion the public and government spend on oil consumption.

A Card Game Designed to Help Urban Communities Plan for the Future
Jennifer Hattam, CityLab, February 26, 2019
Alexis Şanal, an architect in Istanbul, Turkey, has created a card game called Imaginable Guidelines to facilitate discussions about urban design in Istanbul. The game contains large illustrated cards representing one aspect of urban design, meant to facilitate discussion about necessary, desirable, and irrelevant urban design problems. Planning professionals in Turkey believe the game will help to actively involve community members in the planning process, organize civic priorities, and communicate these to local officials, resulting in a planning process embedded in communities, rather than in a centralized, political decision-making body.