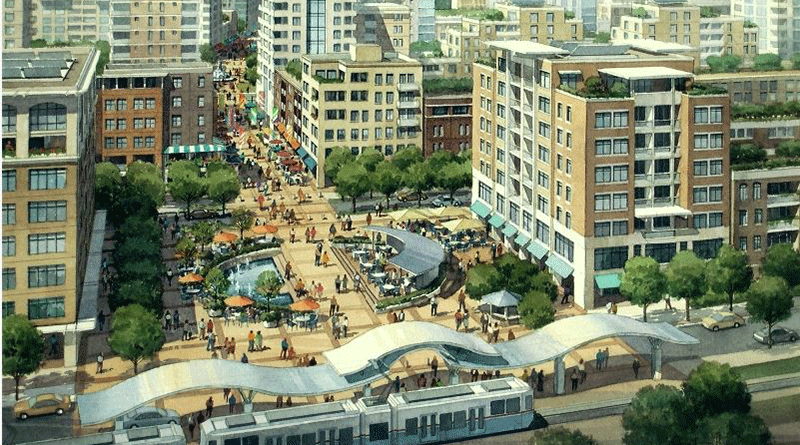 Perkins Eastman Tapped for 100-Acre Mega Development in Jersey City
Jonathan Hilburg, The Architect’s Newspaper, January 14, 2019
The Jersey City Redevelopment Agency (JCRA) has selected Perkins Eastman to design a new residential complex to be located in the proposed Bayfront community on the Jersey City waterfront. A master plan for the site has been developed by Anton Nelessen Associates, and JCRA will issue RFPs in March 2019 that will reflect the vision of the master plan.

Controversy Continues as Montclair’s Lackawanna Hearing Winds Down
Julia Martin, North Jersey Record, January 15, 2019
Montclair residents attended a planning board meeting on January 14th to comment on Pinnacle Properties’ application to redevelop Lackawanna Plaza. Many voiced concerns about preservation of the historic Lackawanna Terminal, safe pedestrian access, and parking availability. Other potential plans for the property were presented during the meeting. The planning board is scheduled to vote on the developer’s proposal in a few weeks, after public comment and final summations.

Plainfield: Ambitious Redevelopment Plan Bringing New Apartments, Businesses, and Growth
Bob Makin, Bridgewater Courier News, January 18, 2019
Plainfield, a NJ Transit Village since 2014, is looking to become the hub for Union County’s medical industry and the performing arts, while also encouraging young professionals and families to live in the city. Muhlenberg Hospital has undergone redevelopment into medical office and residential spaces, and millions of dollars have been invested in additional TOD housing stock. Future plans include a pedestrian plaza around the train station and centering the new downtown around North Avenue.

Verdict Puts Bloomfield on Track for Lackawanna Train Station Renovation
Owen Proctor, North Jersey Record, January 18, 2019
A jury has declared that Bloomfield Township must pay $1.6 million in its eminent domain seizure of the Lackawanna train station property it is seeking to redevelop. The station’s interior has been closed for six years during the legal fight, although its platforms still service many NJ Transit Montclair-Boonton line passengers. With the sale price set, the township is now free to redevelop the station to complement the new housing and businesses in the downtown area.

Transit-Oriented Developments Could Reshape Baltimore’s Commuting Landscape, But Hurdles Remain
Meredith Cohn, The Baltimore Sun, January 14, 2019
The City of Baltimore is working towards creating TOD zones around its Metro subway line, but faces obstacles, particularly decreasing ridership. David S. Brown Enterprises is creating a TOD adjacent to the Owings Mill Station, on a direct route to Johns Hopkins Hospital, and has plans to start work in other areas of Baltimore County. However, studies have shown that most segments of Baltimore City and County do not have access to good transit, creating obstacles to facilitate TOD work in the area.

Atlanta Transit CEO Calls for $100B ‘Moonshot’ Investment
Katie Pyzyk, SmartCitiesDive, January 14, 2019
Atlanta is expected to grow 50 percent in the next 30 years, and MARTA’s General Manager Jeffrey Parker is calling for a $100 billion investment in transit improvements in anticipation. Many of the funds would be put towards expanding the transit network outside of the city center into the entire metropolitan area by installing, for example, a BRT system. Parker also wants to put funds towards TOD efforts that are already underway thanks to a $15 million TOD fund from Invest Atlanta.

Transit-Oriented Plan for Kempas
NST Property, New Straits Times, January 17, 2019
The Railway Assets Corporation has selected nine of its owned parcels as candidates for transit-oriented and transit-supportive development. The Kempas, Malaysia parcel is 50.59 hectares and the RAC would like to eventually develop it into an entire township. Kempas lies on a bus line between Johor Bahru, across the strait from Singapore, and the town of Senai.