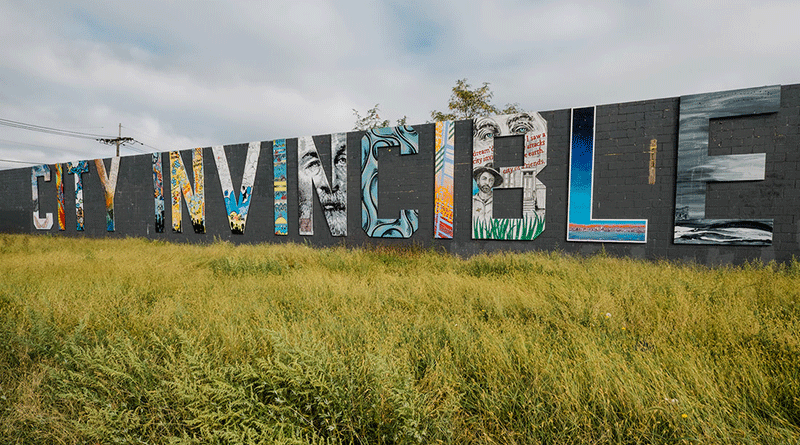 An example of a public art installation in Camden. Source: Connect the Lots Camden

Rutgers University-Camden Partners with City, Cooper’s Ferry on $1 Million Bloomberg Philanthropies Grant to Transform Illegal Dumping Sites Into Art Spaces for Camden Neighborhoods
Rutgers-Camden News Now, January 24, 2019
Camden, NJ, as a winner of the Bloomberg Philanthropies 2018 Public Art Challenge, will receive a $1 million grant towards the “A New View” public art project. Sites along PATCO lines, the RiverLine, and the Camden GreenWay will be repurposed as art installations and creative programming to counter the illegal dumping of household and industrial waste and to encourage residents to explore new parts of the city. The project is a collaboration involving the City of Camden, the Cooper’s Ferry Partnership, and Rutgers University-Camden.

The Complicated Business of Building a Startup Scene From Scratch in Camden, New Jersey
Leigh Buchanan, Inc. Magazine January 28, 2019
A startup coworking space, Waterfront Lab, founded by a New Jersey resident and Rutgers grad, is relocating to an office in Camden’s City Hall and working to bring startup companies to the city. The founders believe that Camden’s assets, including upgraded transit facilities and an increasingly developing downtown, make the city a great place for tech companies to establish themselves. Additionally, startups, unlike large corporations that have relocated to Camden, do not have an established employee base and will be able to create new jobs for local residents.

To Save the Planet, the Green New Deal Needs to Improve Urban Land Use
Jenny Schuetz, Brookings, January 15, 2019
Newly elected progressive representatives in Congress have begun drafting the Green New Deal in response to the Fourth National Climate Assessment. The author proposes several land use improvements that the Green New Deal should consider, including promoting mixed-use zoning, eliminating exclusionary zoning policies, and building more housing near transit and employment centers.

Alongside New Light Rail Stations, Seattle Plans Affordable Housing
Hallie Golden, CityLab, January 29, 2019
Sound Transit, Puget Sound’s transportation authority, will offer, at minimum, 80 percent of its surplus property (where construction on its light rail stations is staged) to be used for affordable housing projects.  The program was officially codified in legislation in 2016. The agency has already conducted an RFP process for its surplus land near the Capitol Hill station, which received $8 million in funding from the City of Seattle to construct 428 affordable apartment units.

How Well is the Region Doing at Planning for Growth Near Metro?
Tracy Hadden Loh, CityLab, January 30, 2019
An analysis of the DC metropolitan area finds 74 percent of the land is zoned for detached single-family homes or open space, counter to the TOD principles that the region would like to adopt for areas around metro stations. Stations in Alexandria, as well as the Tysons Corner neighborhood, have updated their zoning to allow higher density, but many DC stations outside of the CBD either have exclusionary zoning policies or are located in neighborhoods populated entirely by single family homes. As homes in these areas are generally much older than the stations, changing zoning ordinances will likely spur litigation from neighborhood residents.

How the Federal Shutdown Affected Transit
David Peter Alan, Railway Age, January 30, 2019
After a 35-day government shutdown, many transit agencies are recovering from the loss of ridership and federal funds. Some agencies have had to transfer capital funds to cover operations costs. Additionally, many transit providers, have seen a delay in the processing of their paperwork requesting time extensions to complete Positive Train Control installation. If the government shuts down again on February 15, and agreements expire, some capital projects may lose their financing.

Developer Offers a Different Kind of Transit-Oriented Vision in Newton
Jon Chesto, The Boston Globe, January 30, 2019
Northland Investment Corporation has proposed a “transit hub” mixed-use project that would provide shuttle buses to T stops along the Newton-Needham line. The project is a mile from the nearest commuter rail stop. Northland has proposed that members of the public could pay to ride the shuttle buses along with residents of the mixed-use project who would ride for free. In a presentation to the Newton City Council committee, Northland did not state how much they would expect commuters to pay to take the bus.

What Happened When Oslo Decided to Make its Downtown Basically Car-Free?
Adele Peters, Fast Company, January 24, 2019
In 2015, Oslo’s new progressive government removed hundreds of parking spots in the city’s downtown area, leaving only parking garages on the outskirts and spots for handicapped, electric, and emergency vehicles. Since these changes, more people are biking downtown, and the city center has experienced a 10 percent increase in pedestrians. Businesses are receiving more foot traffic, and Oslo’s bike share program has experimented with spiked tire winter bikes to keep up with the increasing demand.

DMICDC: Creating Opportunities for New India
eGov Magazine, January 31, 2019
In an interview with eGov Magazine, Alkesh K Sharma, the CEO of the Delhi-Mumbai Industrial Corridor Development Corporation (DMICDC) discussed the DMIC project and how it will help build “a new India.” The $100 billion project is focusing on TOD through market-driven nodes that will attract developers and businesses. Local governments are utilizing the project to develop their own greenfield cities, which will be connected to the DMIC through Mass Rapid Transit Systems.