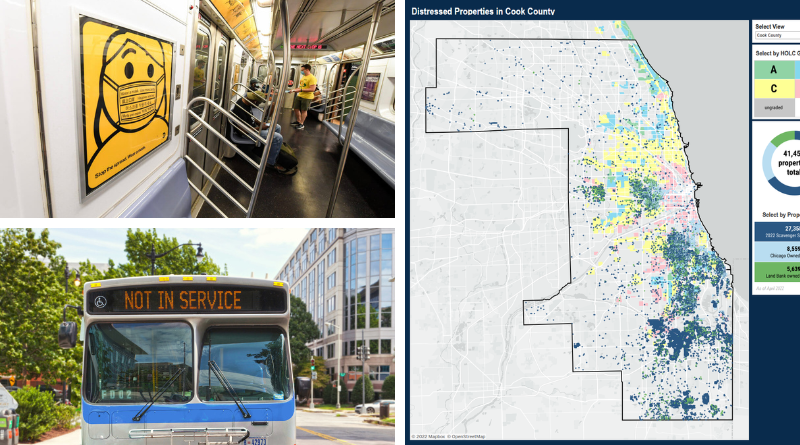 To combat automobile crashes, Atlantic City is reducing Atlantic Avenue’s lanes from four to two lanes. The move is part of a broader three-phase effort to better manage vehicle speeds. The $21 million project is also set to provide bicycle and pedestrian amenities in the form of new bike lanes and sidewalk designs, which will include improved tree cover and lighting.

CALIFORNIA—BART’s Mask Mandate Expires, Though Face Coverings Still ‘Strongly Encouraged’
Kris Sanchez and Pete Suratos, NBC Bay Area, July 18, 2022
Mask mandates for Bay Area Rapid Transit (BART) facilities and transit services expired on July 18th, allowing passengers to legally ride without masks for the first time in over a year. The agency board will convene on July 28 to discuss the possibility of instituting another mask mandate. Meanwhile, BART and public health officials recommend riders continue to wear masks in the face of increasing cases of COVID-19 in California.

NEW YORK—Sign of the Times? MTA Removes COVID-Era Yellow Subway Mask Posters
Kevin Duggan, AmNY, July 14, 2022
In a subtle shift, the MTA has started phasing out its famously yellow subway signs reminding passengers to wear masks to protect against COVID-19. Currently the MTA requires passengers to wear masks on transit services and at indoor transit stations, but the removal of these signs arguably demonstrates changes in the agency’s approach. The agency lifted weekly testing requirements for its employees, as New York City adjusts to the current phase of the pandemic.

NEWARK—NJIT Students Honored at the Core 77 Design Awards for Their Take on the Housing Crisis with Deployable Shelter Prototype
Archinect, July 21, 2022
NJIT architecture students received the Design for Social Impact Award and the Built Environment Award for their Place of Dwelling (POD) design at the Core 77 Design Awards. The work resulted from a studio course aimed at developing a unit that could be built quickly, inexpensively and meet the needs of an unhoused person.

JERSEY CITY—Jersey City Redevelopment Agency OKs 1st Bayfront Building with 35% Affordable Housing
John Heinis, Hudson County View, July 20, 2022
The Jersey City Redevelopment Agency approved the construction of Bayfront Promenade, comprising 209 units (of which 35 percent will be offered as affordable housing) as well as retail space, job prioritization for local residents, green infrastructure, flood mitigation, and other Hackensack River Waterfront amenities. Bayfront Promenade will be the first project to be built as part of the 100-acre Bayfront Redevelopment area, which will add thousands of units to Jersey City’s West Side neighborhood.

Tens of thousands apply to NJ’s housing voucher lottery. Only 4,000 will make the waitlist.
Karen Yi, The Gothamist, July 19, 2022
The NJ Department of Community Affairs (DCA) has rolled out a housing voucher lottery program to help subsidize the rent of 4,000 very-low-income families and individuals in the State. Reportedly, voucher recipients will contribute between 25 and 45 percent of their income toward rent, the balance to be paid by the State. The program received 61,509 submissions a week after applications officially opened. To ensure the representation of vulnerable populations, vouchers will be evenly distributed among four groups: seniors, families, people with disabilities, and people experiencing homelessness.

PLAINFIELD—Plainfield Approves Another 55-Unit Development Near Transit
Chris Fry, Jerseys Digs, July 19, 2022
The Plainfield Planning Board approved a new five-story, 55-unit development proposal on July 7th. The project development team, which includes 1112 North Urban Renewal LLC among others, reportedly aims to “create a transit-oriented development hub” in one of the fastest growing cities in Union County. This project, to be built at 1112 North Avenue, is one of four revitalization efforts along Plainfield’s North and South Avenue corridors.

ILLINOIS—A New Study Explores the History of Redlining and Resulting Housing Inequity in Cook County
Crain’s Business Journal, July 19, 2022
A study from the Cook County Treasurer’s office connects the historical geographies of redlining to the disproportionate number of abandoned properties in Chicago’s South and West Sides and in suburbs such as Maywood. The study focuses on vacant and abandoned land in the City and government-owned land in the County—parcels offered for sale at bargain rates during Cook County’s biannual effort to encourage development and improve its tax roll. According to the study, more than half of the 27,358 properties offered in 2022 (14,085) lie within the redlined areas defined by the 1940 federal Home Owners’ Loan Corporation map of the Chicago area. The study found similar results in Philadelphia and Detroit.

UTAH—UTA to Give Free Transit Passes to SLC School District Students and Employees
Kim Bojórquez, Axios, July 19, 2022
The Utah Transportation Authority (UTA) plans to distribute 23,000 free transportation passes this year to K-12 students, faculty, and staff of the Salt Lake City School District. The passes can be used for bus and TRAX light rail system rides. The one-year pilot program, designed to promote youth ridership and support educators, may be expanded to other school districts, according to Kensey Kunkel, UTA Manager of Business Development and Sales.

NEW YORK—New York Tried to Make Apartments Affordable. The Opposite Happened.
Janaki Chadha, Politico, July 16, 2022
Median rents in Manhattan exceed $5,000 a month for the first time in history, raising questions about the supply of affordable housing in New York City and the surrounding area. With demographic growth seemingly overtaking the construction of new rental units, city officials and advocates point to restrictive land use controls implemented by surrounding municipalities and by the State of New York as exacerbating the pandemic’s squeeze on the regional housing market. Addressing the availability of affordable housing units in the face of low construction rates, drastic changes in work-travel, and the rise of seasonal/short-term apartment leasing may be key in New York City’s efforts to create a more equitable city in the years to come.

TEXAS—Can Texas Central Go Forward?
David Peter Alan, Railway Age, July 19, 2022
Despite recent upheaval in leadership, Texas Central, the private railroad company behind a Dallas-Houston high speed rail project, received a favorable ruling from the Texas Supreme Court that will allow them to invoke eminent domain for the construction of their planned track. The 5-3 ruling in favor of the firm’s recognition as a railroad company was reportedly unexpected to many observers. With the previous uncertainty on the ruling removed, it is possible that the stalled momentum of the multi-billion project will receive renewed confidence from investors and other stakeholders.

Bus Operators Are in Crisis. Here’s How Agencies Can Turn Things Around.
Transit Center, July 20, 2022
Maintaining well-functioning transit systems relies upon bus operators, but many U.S. agencies and other transportation providers are facing an underlying crisis in hiring and retaining operators of trucks, school buses, and transit buses. In its most recent report, Transit Center expands on the causes of the shortage and potential solutions that could result in better pay, more flexibility, and safer working conditions for drivers.

NORTH CAROLINA—Getting off the bus: How Charlotte Transit lost 75% of its passengers in less than a decade
Steve Harrison, WFAE 90.7, July 18, 2022
The sudden drop in ridership has many in Charlotte questioning where did all the people go? COVID-19 played a significant role. However, Charlotte Area Transit System (CATS) bus ridership was already in decline before 2020 and riders returned quickly to the light rail system and express buses, but not the regular buses. This article explores the effects of service quality, increased car ownership, and land development patterns on bus ridership.

CALIFORNIA—Some Schools Build Affordable Housing to Retain Teachers
Janie Har, Associated Press, July 15, 2022
Throughout California, school systems struggle to hire and retain teachers who find themselves priced out of the housing market. The Jefferson Union High School District in San Mateo County is working to address this challenge by building housing for its employees. The district built the units on government-owned land, a strategy that can be seen as a model for other districts.

COLORADO—New Colorado ‘Middle Income’ Housing Authority Expected to Build 3,500 Units, But Raises Questions from Some in Industry
Andrew Kenney & Matt Bloom, Colorado Public Radio, July 15, 2022
The creation of a new “Middle Income Housing Authority” has sparked discussion regarding how public sector loans and private developers interact within Colorado’s tight housing market. The pilot program currently operates with a $1 million budget but may eventually have the potential to deliver billions of dollars of loans to build income-restricted housing. Critics point to the mixed track-record of a similar effort in California as cause for concern. Lawmakers and supporters of the new authority highlight differences in the two programs and the immediate need for housing among middle-income Coloradans who do not qualify for traditional housing assistance.

CANADA—Are Turnstiles the Answer to Calgary’s Transit Woes? Cities that Took the Plunge Tell Us What They Know
Lucie Edwardson, CBC News, Jul 20, 2022
The Calgary City Council seeks to reduce social unrest, drug use, and crime at its transit stations and is considering the installation of gates or turnstiles to help achieve this goal. Vancouver and St. Louis, Missouri, serve as examples of places that have installed the devices. Some in Calgary are skeptical that this $400 million investment would deliver on its promises. One Calgary Transit rider believes it is pointless to spend such a huge sum on turnstiles that may only move undesirable people a few meters away.

INDIA—Govt Has a $10-bn Plan to Decarbonize Public Transport and Curb Emissions
The Editor, Business Standard, July 20, 2022
The state-run Convergence Energy Services Ltd. is planning a $10-billion purchase of 50,000 electric buses to help India decarbonize its public transport and achieve its net-zero emission goals. According to Mahua Acharya, Managing Director of CESL, India, the world’s third-largest emitter of carbon, needs to construct charging stations, expand grid capabilities, and remodel depots to promote the use of electric vehicles. He added that India could electrify all two-wheel vehicles and complete electrification of public buses in the next five to seven years.

IRELAND—Dublin Is Getting its First Metro Line
Feargus O’Sullivan, Bloomberg, July 20, 2022
Dublin is on track to build its first metro line. Originally proposed in 2000, the largely underground route will link 16 stations between the center of the Irish capital and its northernmost suburbs, extending more than 19.4 kilometers (13 miles). As of 2020, 59 percent of all city trips were made by private vehicle (according to Deloitte’s City Mobility Index), while just 15 percent of trips were completed by bus, light rail, or train. At its total capacity, the forthcoming MetroLink system will be able to move up to 20,000 passengers every hour.