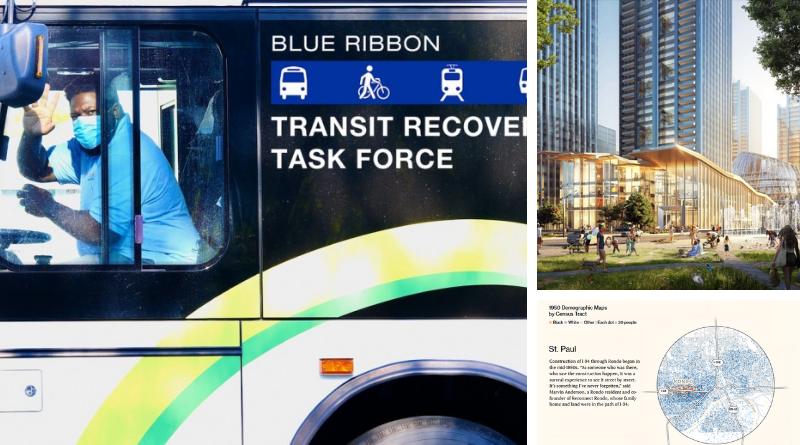 With the expected passage of the bipartisan infrastructure bill, transit and transit-related projects would see a boost in support. The MTA would receive $10.7 billion from two sources, the current infrastructure bill, as well as a $50 billion allocation from the Obama-era FAST Act. The vast majority of the infrastructure bill’s $58 billion earmarked for rail would go to Amtrak, which released a broad vision document earlier this year that describes how the agency would spend the funds. Additionally, part of a $30 billion sum for federal-state partnership grants could be spent on the Gateway Program, a project to rehabilitate the existing Hudson rail tunnel used by Amtrak and NJ TRANSIT, and construct another one. A spokesperson for NJ TRANSIT said that the agency is awaiting information on its allocation in the infrastructure bill.

Will the Delta Variant Wreck the Recovery?
Neil Irwin, The New York Times, July 29, 2021
While the risk of a grave economic crisis may have passed, the looming threat of a COVID resurgence has caused economists to project an even more protracted return to normal. For transit, delayed office re-openings may extend the period of lowered ridership, which may affect many systems that primarily serve commuters traveling to and from employment centers.

ILLINOIS—Transit Association Says CTA Was the Agency that Best Coped with COVID-19 Challenges
John Greenfield, Streetsblog Chicago, July 26, 2021
The American Public Transportation Association (APTA) recognized the Chicago Transit Authority (CTA) as the top large transit authority in North America for 2020. APTA cited CTA’s performance throughout the pandemic, such as continuing to maintain regular service levels for essential workers, as a key reason for receiving the award.

CALIFORNIA—COVID Recovery: Task Force Unveils Plan to Get Bay Area Transit Agencies Back on Track
John Ramos, KPIX, July 26, 2021
A recovery task force of the Metropolitan Transportation Commission, the government body responsible for regional transportation planning in the Bay Area, released a 27-point plan to support the region’s transit ridership recovery. The plan aims to make Bay Area public transit more accessible and comprehensible to riders by coordinating the area’s 27 transit agencies into one seamless system, with uniform signage and a standardized payment system. Plan implementation is to occur over the next three years.

HOBOKEN—Revamped Plans for 675-Unit Development in Hoboken Now Include 1.5-Acre Park
Chris Fry, Jersey Digs, July 28, 2021
930 Monroe St, which borders the 9th Street Station of the Hudson-Bergen Light Rail, could see several new buildings comprising 675 units. In accordance with Hoboken’s affordable housing regulations, ten percent of the units would be reserved for affordable housing, and, if approved, the developer, Madigan Development, would also contribute a 1.5-acre park nearby.

New Jersey Transit CEO Says Agency Capital Program Is Forging Ahead
Jim Parsons, Engineering News-Record, July 26, 2021
NJ TRANSIT is continuing to pursue an ambitious capital plan, with $4 billion in projects planned or underway. These include a replacement for the Portal Bridge over the Hackensack River, the Raritan River Bridge between Perth Amboy and South Amboy, and the Long Slip Fill and Enhancement project, a resilience measure in Jersey City adjacent to Hoboken Terminal. The agency still lacks $5 billion for the total $15 billion five-year capital plan, including a $361 million loss this year due to capital funds being diverted to the operating budget.

NEWARK—Zoning Board Approves Five-Story Multifamily Building in Central Ward
Tom Wiedmann, Tapinto Newark, July 23, 2021
The Newark Zoning Board of Adjustment approved a plan from developer the Art of Newark 2, LLC to build a 47-unit mixed-use building in the City’s Central Ward. The site, currently a vacant lot, is located one block from the confluence of five NJ TRANSIT bus routes, the 1, 25, 361, 375, and 99.

The Apps That Are Redefining Accessibility
Hadriana Lowenkron, Bloomberg CityLab, July 29, 2021
In a world that is increasingly digital, and still largely inaccessible, some companies are developing tools that increase options and awareness for people with disabilities. For example, accessible navigation app, BlindSquare, uses audio information to enable users to navigate and learn more about the space around them. Another app, AccessNow, is a platform for mapping and reviewing places based on their accessibility, providing advance notice of barriers, such as dysfunctional elevators or a lack of curb cuts.

PENNSYLVANIA—Economy and Racial Equity in Pa. Would Benefit From Increased Public Transit Funds in Federal Infrastructure Bill, Says Report
Ryan Deto, Pittsburgh City Paper, July 28, 2021
A report by advocacy groups National Campaign for Transit Justice, Just Strategy, and Pittsburghers for Public Transit found that $20 billion in annual federal funding for transit could considerably boost access and economic opportunity for disadvantaged communities in Pennsylvania’s metro areas. For example, in Braddock, PA, where 77 percent of residents identify as Black, such an investment would more than double the number of jobs that could be reached via transit in under 30 minutes.

What It Looks Like to Reconnect Black Communities Torn Apart By Highways
Rachael Dottle, Laura Bliss, and Pablo Robles, Bloomberg CityLab, July 28, 2021
Using visual storytelling and historical data, Dottle, Bliss, and Robles illustrate the ravages that interstate highway construction wreacked upon black communities across the country. They detail how some communities and DOTs are approaching the work of remedying past wrongs, such as the Minnesota State Legislature funding preliminary planning efforts for a land bridge over I-94 in Rondo.

MASSACHUSETTS—US2 and the City of Somerville Break Ground on $2 Billion Project – Working with Gilbane Building Company and Cranshaw Construction
New England Real Estate Journal, July 30, 2021
With the opening of the Green Line Extension to Somerville’s Union Square later this year, the City of Somerville and master developer Union Square Station Associations (US2) announced a $2 billion mixed-use development near the new transit stop. The 15-acre site will see 1,000 new units (with 20 percent designated as affordable), as well as office, retail, and hotel space. The development will also include 3.6 acres of new public parks and open space.

FLORIDA—Ybor City Development Plan Unveiled: Park, Condo Towers Lead 50-Acre Proposal
Jay Cridlin and Emily L. Mahoney, Tampa Bay Times, July 27, 2021
The Ybor Historic District could see a massive, 50-acre redevelopment with high-rise offices and up to 50,000 new housing units in an area to the north of downtown Tampa currently comprised of empty lots. The project, with the working title “Gas Worx,” would be built to resemble Tampa’s nearby downtown, and include transit connections, such as an extension of the TECO Line Streetcar. The developer is in preliminary talks with private passenger rail operator Brightline about a potential extension to Tampa to align with the mega-project.

CALIFORNIA—San Jose BART Station Sparks Plans for New Homes
George Avalos, Silicon Valley.com, July 26, 2021
With the planned BART extension through downtown San Jose, a private developer has applied to construct a 205-unit building on a 1.16-acre site near the location of the future 28th Street / Little Portugal Station. According to Jerry Strangis, who represents the developer, up to fifteen percent of the units would be reserved for affordable housing. The BART Silicon Valley extension project is expected to be complete by 2030.

COLORADO—Denver Slashes Minimum Parking Requirements for New Developments to Boost Affordable Housing
Aaron Smithson, The Architect’s Newspaper, July 23, 2021
In June, the Denver City Council reduced the City’s minimum parking requirements from 1.25 to .1 on average, or one space per 10 units. This decision was in keeping with an analysis of parking utilization from the Regional Transportation District (RTD), and is supported by advocates, industry groups, and local public agencies. Parking can add construction costs ranging from $20,000 to $50,000 per space, which can make financing affordable housing infeasible.

CALIFORNIA—Lancaster’s BLVD Delivers
Josh Stevens, California Planning & Development Report, July 20, 2021
At the northern edge of Los Angeles County in the Antelope Valley, Lancaster, California, a far-flung suburb typically known for car-centric planning, converted a wide street in 2010 into a walkable boulevard. According to the City, the new urban center has attracted 40 businesses to the nine-block area. Adjacent to the “BLVD,” as Lancaster Boulevard is now know, is the terminus of the Antelope Valley MetroLink commuter rail line, with service to Union Station in Los Angeles.

CHINA—“Transform the City into a Highly Complex Block System”: SOM on TOD Projects
Han Shuangyu, ArchDaily, July 29, 2021
Architects at the firm SOM discuss their work with Transit-Oriented Development in China, specifically with regards to the country’s expansive High Speed Rail (HSR) network. The first wave of HSR stations in the country were designed in the vein of airports, on the periphery of cities, but in recent years are becoming more integrated with city centers and anchored around pedestrian districts.