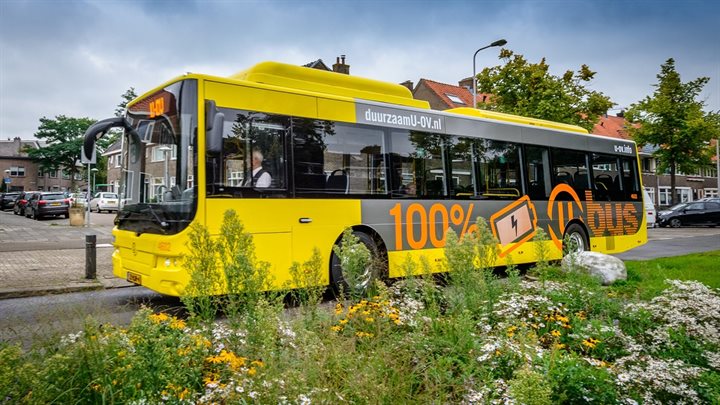 One of Utrecht’s electric buses. Utrecht Township, The Netherlands

Renderings Revealed for New Residential Skyscraper at 184 Morgan Street in Jersey City
Michael Young, New York YIMBY, July 6, 2019
New renderings have been released by Marchetto Higgins Stieve for a 41-story residential building at 184 Morgan Street in Jersey City. The building will be located at the intersection of Marin Boulevard and Morgan Street, which is one block from the Grove Street PATH Station and walking distance from the Harborside Light Rail Station and Ferry Terminal. The project will comprise 482 residential units, parking, a theater and 14,000 feet of amenities. The developer, the Albanese Group, anticipates beginning construction soon and completing work by 2022.

More Apartments Could Be Coming to Area Around Roselle Park Train Station
Liv Meier, Union News Daily, July 7, 2019
Harbor Consultants, Inc., presented preliminary redevelopment plans for a one-acre site near the Roselle Park Station at a June 20 Borough Council meeting. The proposed project would transform the site of the H&H Building Supply Company into a mixed-use property comprising apartments, retail space and commercial space. This aligns with the Borough’s vision for developing the area around the station into a transit village. NJ TRANSIT’s Raritan Valley Rail Line runs along the southern edge of the redevelopment site located at 140 West Webster Avenue.

PMZ Closes $37.5M Loan For Montclair Hotel
NJBiz Staff, NJ Biz, July 10, 2019
PMZ Realty Capital LLC has closed out a three-year $37.5 million bridge loan for the development of the MC Hotel in Montclair. The MC Hotel, developed by The Pinnacle Companies and The Hampshire Companies, is the cornerstone of the town’s $120 million Centroverde mixed-use development. The 159-room property is set to open later this summer. The hotel is located on Bloomfield Avenue with easy access to buses and is less than a mile from the Walnut Street Station on the Montclair-Boonton Line.

It Takes a Village: Lois Schneider Realtor Celebrates Opening of Townhome Complex in Summit
TAPINTO Summit Staff, Tap into Summit, July 10, 2019
The Village Courtyard, an upscale community comprised of townhouses and condominiums in downtown Summit, has officially opened to residents. The community is located at Summit Avenue and Franklin Place, one block away from the Summit Station. Summit is a designated NJ Transit Village. The units range in size from 1,955 to 3,056 square feet.

OneWall Partners Secures $57M Freddie Mac Loan for 13-Property Portfolio
John Jordan, Globe St, July 11, 2019
CBRE recently announced that OneWall Partners, one of the largest transit-oriented workforce housing owner/operators in New Jersey, has secured $57 million in financing through the Freddie Mac Small Balance Loans Program. The loan is for a 13-property residential and mixed-use portfolio with property locations in Jersey City, Orange and East Orange. Most of the properties were included as part of a $63 million portfolio purchase back in 2017.

Edgewood-Candler Park MARTA Station Plows Ahead with Next Transit Development
Sean Keenan, Curbed Atlanta, July 9, 2019
The Metropolitan Atlanta Rapid Transit Authority (MARTA) will shut down the parking lot at the Edgewood-Candler Park MARTA Station starting July 22. MARTA anticipates spending about 22 months to construct the final phase of a mixed-use TOD project which will include a new performing arts center, the Spoke apartment complex, and a new parking deck.

$45M Train Station Project Planned for Greenwich
Ken Borsuk, Greenwich Time, July 9, 2019
The Ashforth Company is leading a $45 million, large-scale redevelopment project at the 50-year-old Greenwich Transportation Center. The area will be redeveloped through a private-public partnership with Ashforth, the Town of Greenwich, Metro-North, and the Connecticut Department of Transportation. Plans include two new transit stations on the north and south sides of the tracks, pedestrian and commuter pathways, retail space, a movie theater and a privately-owned public park. Construction on the station is slated to begin next year.

Ground Breaks on Muttart Residential Area near Stadium LRT
Thandiwe Konguavi, CBC News, July 8, 2019
On Monday, Edmonton officials and Rohit Land Development representatives broke ground on construction for the Muttart Urban District Project. Muttart Urban District, a three phase, mixed-use TOD, will include 720 residential units and 7,500 square feet of commercial space. The project will link the residential and commercial spaces to the north side of the LRT tracks at Commonwealth Stadium as part of reaching the city’s goal of increasing transit ridership.

NSW Looks to Facial Recognition as Opal Card Alternative
Justin Hendry, It News, July 10, 2019
In a recent speech, New South Wales Transport Minister Andrew Constance introduced the possibility of using facial recognition technology to pay for public transit as a replacement for the current Opal card in the future. The facial recognition technology would scan commuters and link the faces of Sydney commuters to their Opal account for those who opt in to the frictionless transport payment option. Constance stated that this technology would work similarly to Amazon’s ‘Just Walk Out’ initiative, which allows commuters to travel through ticket barriers without having to tap on or off.

Big Plans for Bucharest’s Main Train Station: Mall and Offices, Underground Railway
Newsroom, Romania Insider, July 10, 2019
The Romanian Ministry of Transport has recently published a strategy focused on the transformational development of Gara de Nord, the main train station in Bucharest. The Ministry’s plans for 2019-2023 include modernizing the station from a terminus station into a major transit hub between Europe and Asia. The Ministry is exploring options for underground railways, a mall and offices at the North Railway Station to create an improved transit hub.

Holland Covers Hundreds of Bus Stops with Plants as Gift to Honeybees
Chiara Giordano, Independent, July 11, 2019
The City of Utrecht, NL has added green roofs to each of its 316 bus stops. The new plants—mostly sedum—support bees, increase biodiversity, and contribute to the City’s initiative to improve air quality. Utrecht’s goal is to have “completely clean public transport” by 2028 and aims to introduce a new fleet of 55 electric buses by the end of 2019 as part of this goal. City workers have the responsibility of caring for the green roofs, which are also designed to capture fine dust and store rainwater