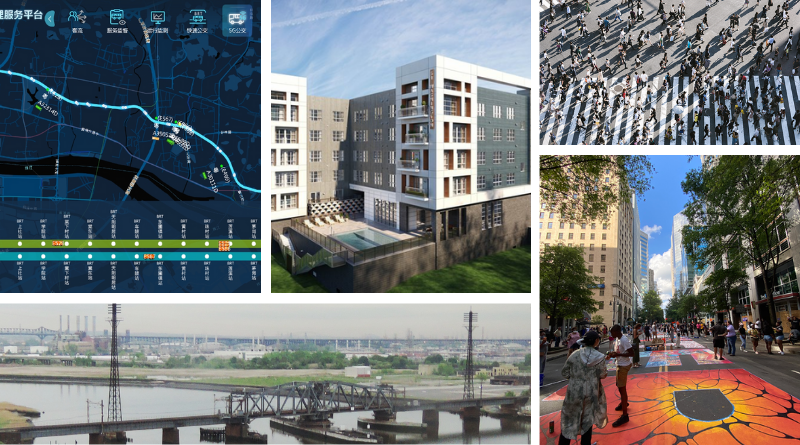 The COVID-19 threat is here for the foreseeable future. As cities reopen, protecting passengers on public transit is a matter of life and death.
Tim Levin, Business Insider, June 26, 2020
With many states reopening and new coronavirus cases rising, public transit agencies have been seeing little-to-no success in increasing ridership despite their efforts to implement social distancing measures to keep riders safe. Urban planning experts and transportation advocates urge cities to transform urban mobility and transportation by investing in cyclist, pedestrian, and scooter-friendly infrastructure and by making it easier for city-dwellers to stay car-free.

New Report from American Society of Civil Engineers Shows Dire Impacts of COVID-19 on Nation’s Infrastructure Sectors
Alexa Lopez, Infrastructure Report Card, June 24, 2020
Earlier this week, the American Society of Civil Engineers (ACSE) released a report titled “COVID-19’s Impact on America’s Infrastructure,” detailing the further deterioration of America’s existing infrastructure, most of which was already overdue for replacement and repair. According to the ASCE’s president Dr. K.N. Gunalan, the nation’s outdated roads, bridges, energy and water systems, and transit infrastructure need to be a priority in Congress’ immediate response and long-term economic recovery strategy. The full report can be viewed here.

Are We There Yet?
Nathanael Johnson, The Grist, June 24, 2020
How are attitudes to safety, health, and mobility changing? To find out, The Grist talked to experts and transportation advocates about how transportation will change in the face of a global pandemic. Among those highlighted is Tri-State Transportation Campaign advocate Janna Chenertz, who is optimistic about adaptation and prioritization. “When we experience traumatic events like this, it exposes our vulnerabilities, and that causes long term change,” she says of the public’s response to COVID-19.

Fearful Commuters on Trains, Buses Hold One Key to U.S. Recovery
Ryan Beene, Bloomberg, June 23, 2020
As cities reopen, transit agencies are working to accommodate social distancing measures and more stringent sanitation standards, but transit ridership rates are still slow to catch up. If transit agencies are unable to raise enough revenue to operate, they may be forced to provide less frequent service. “People who really rely on [public transit will] have a big mobility problem,” says Deborah Salon, a professor at Arizona State university. Unless transit agencies can entice riders back, the uncertainty of the post-coronavirus economy spells out a dim forecast for dense urban areas where many people are transit-dependent.

Does city living spread coronavirus? It’s complicated.
Shannon Osaka, The Grist, June 22, 2020
While many were quick to pin the blame on urban density for the widespread outbreak of the coronavirus in New York City, research shows that some of the densest cities in the world have reported much lower cases of the disease, suggesting that population density may not necessarily be the cause of infection. Experts believe that areas that force people into close, prolonged contact are more likely to facilitate the transmission of the virus. University of California Berkeley professor Jason Corburn points to overcrowding, not density, as the real culprit.

How the Coronavirus Recovery Is Changing Cities
Bloomberg CityLab, June 22, 2020
With the reopening of businesses and establishments, city landscapes are shifting towards a new normal. People are learning to use space more effectively to accommodate social distancing measures. Bloomberg’s CityLab compiles some noticeable changes in transportation, retail, public spaces, street design, dining, and business as cities recover from the blow of the pandemic.

Recovery for All: Jersey Renews Releases Roadmap for a Just, Green Recovery to Guide Planning
InsiderNJ, June 25, 2020
New Jersey faces the challenge of balancing long-term economic recovery with its environmental and social justice commitments. Earlier this month, Jersey Renews released “A Roadmap Toward a Just, Green Recovery,” a report detailing 10 core principles for just, green, economic recovery for Governor Murphy’s Restart and Recovery Advisory Council. The report focuses on environment, labor, and equity and urges the state’s decision-makers to prioritize serving “those most deeply affected, especially those on the front lines of any crisis,” referring to black, indigenous, people of color (BIPOC) communities, essential workers, and people with disabilities. The report also highlights the need for investment in the state’s crumbling infrastructure and mass transportation systems.

Portal Bridge Clears Major Hurdle and Likely to Get Funding for Replacement, Murphy Says
Dustin Racioppi, NorthJersey.com, June 19, 2020
Construction plans for the replacement of Portal Bridge, the century-old railroad bridge over Hackensack River, are moving forward after the Federal Transit Administration committed to providing $766.5M in federal grants to the project late last Friday. The new bridge is expected to cost roughly $1.8B, and is an integral piece of the Gateway tunnel project connecting New York to New Jersey, and Boston to Washington, DC.

CONNECTICUT—100 Apartments Approved For Stratford; Historic Home Will Stand
Anna Bybee-Schier, Patch.com, June 25, 2020
The Village rental complex will be built on a 3-acre site once owned by Christ Episcopal Church. The Stratford Zoning Commission recently approved the plans, and stipulated the condition that the Lillie Devereux Blake house, built in 1856, must also remain on the site. The project will be located less than a half-mile from the Stratford Station, on the Metro North New Haven Line.

MASSACHUSETTS—Large Project for Widett Circle Must be Done Right, Advocates Say
Sean Philip Cotter, Boston Herald, June 21, 2020
South Boston’s Widett Circle could be home to a $125 million 19-acre mixed-use development project. But before plans can move forward, City Counselor Ed Flynn urges developers to include modifications that will increase transportation access and affordable units. The Able Company has plans for a vast, 10.5 million sq. ft. development, rivaling the Suffolk Downs project in East Boston. However, the size of the project, and the complexity of improving transit facilities associated with the project, pose challenges to achieving goals.

NORTH CAROLINA—Is Charlotte ready to start ditching cars?
Katie Peralta, Charlotte Agenda, June 21, 2020
A Black Lives Matter mural on the asphalt of Tryon Street between 3rd Street and 4th Street could become a permanent fixture in Charlotte. City Planning Director Taiwo Jaiyeoba recently announced plans to block the 400-foot stretch from automotive transport indefinitely. Charlotte’s Shared Streets pilot program has already designated 2.5 miles of streets for pedestrian use, and the city is in the process of increasing non-car transportation options in its downtown.

PENNSYLVANIA—Port Authority to Study Development along East Busway
Ed Blazina, Pittsburgh Post-Gazette, June 21, 2020
The FTA recently allocated a $700K supplement planning grant for work on transit-oriented development efforts along Pittsburgh’s Martin Luther King Jr. East Busway. This follows a previous FTA grant for $99.95M grant to the city’s Port Authority for improvements to the city’s Bus Rapid Transit (BRT) system. Port Authority Director of Development David Huffaker says that the additional funds will be used “to work with communities” along the busway and railroad corridor as the agency is not a major landowner along the busway.

IDAHO—Boise leaders say they want affordable housing. They enforce zoning that impedes it.
Kate Talerico, Idaho Statesman, June 19, 2020
Boise Mayor Lauren McLean is under pressure to advance work, begun under former Mayor David Bieter, to rewrite the city’s zoning code. Current zoning designates about 80 percent of the city’s residential land exclusively for single-family homes and duplexes, a condition that creates challenges to increasing the availability of affordable housing.  Modest changes in zoning, such as allowing multi-family structures and modifying parking and building height requirements, could help mitigate the situation, especially along key transportation corridors. Without action from the Boise local government, the city is unable to fulfill their plans for a bus rapid transit system and pedestrian- and cyclist-friendly sidewalk improvements.

NEW YORK—Village of Roslyn, Schools on Opposite Sides of Zoning Change
Rose Weldon, The Island Now, June 17, 2020
On Tuesday night, the Village of Roslyn’s Board of Trustees approved zoning changes to accommodate a mixed-use transit-oriented development to replace the strip mall of empty storefronts on the 200 block of Warner Ave. However, the local school district has resisted this change since mid-2019. Despite opposition, the board remains committed to increasing multi-family housing in the city and revitalizing the area with more mixed-use developments with access to transit.

CANADA—Canada and Ontario Invest in Public Transit Infrastructure for Peterborough Residents
Ontario Ministry of Infrastructure, June 24, 2020
The City and County of Peterborough, Ontario, will pursue a total of six public transit projects with national, provincial, and local funding. The projects will be dedicated to new and upgraded vehicles – the purchase of 25 buses, refurbishment of 8 buses, and the purchase of 3 specialized transit vans – which will result in improved accessibility, capacity, and reliability. The Government of Canada will invest CAN$5.8 million in these projects through the Public Transit Infrastructure Stream (PTIS) of the Investing in Canada infrastructure plan, while the Government of Ontario will provide CAN$4.76 million. Local funding includes CAN$3.67 million from the City of Peterborough and CAN$18,000 from the County.

CHINA—China Pilots First 5G Smart Bus Route in Guangzhou
Deng Xiaoci Source:Global Times, June 22, 2020
The Guangzhou Municipal Transportation Bureau recently launched the first pilot of a BRT that uses 5G intelligent coordination on one of the city’s busiest BRT routes, a 17.4-kilometer route that services many of the area’s popular destinations. The technology can streamline scheduling and improve capacity by up to 10 percent. The new application supports operational improvements by video monitoring inside and outside of the moving vehicle, monitoring buses’ and drivers’ performance, and issuing early warnings if a dangerous situation occurs. Information is also shared with the city public transportation guiding app “Xingxuntong,” allowing passengers to learn the location of the closest bus and how crowded it is. According to officials, the entire BRT route receives 5G signals, which enables basic internet services for the routes’600,000 daily riders.

SINGAPORE—Singapore GE: 5-year Upgrading Plans Launched for 2 GRCs
Lester Wong, Straights Times, June 22, 2020
This week, parliament members from Singapore’s ruling party announced their five-year plans to upgrade estates in Tanjong Pagar and Holland-Bukit Timah. The proposals include senior-friendly living amenities, sheltered walkways, community greenspaces, and other improvements to public housing blocks. Panjong Pagar residents will also benefit from more public transit access when the new MRT stations along the Thomson-East Coast Line and the Circle Line open in 2021 and 2025 respectively. The public is also invited to give feedback and suggestions for community renewal and neighborhood revitalization programs that they would like to see in the next five to ten years.