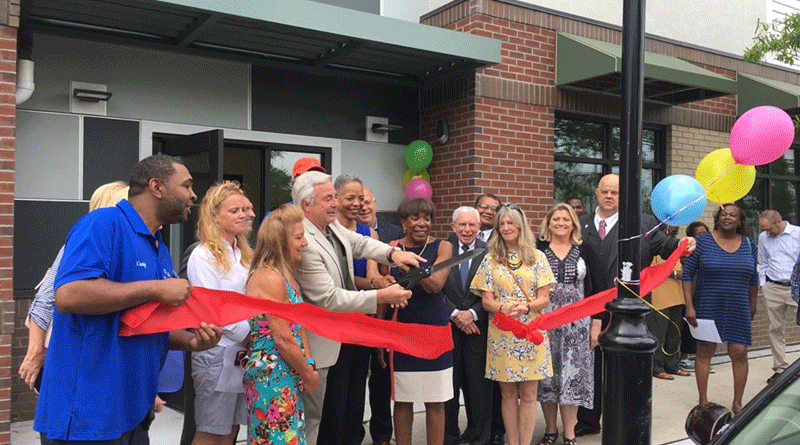 Ribbon cutting, The Renaissance at Asbury Park, June 2019. Photo courtesy of the City of Asbury Park, Department of Planning & Redevelopment

NJ Transit Planning to Build Natural Gas-Burning Power Plant in Kearny
Joshua Rosario, The Jersey Journal, June 17, 2019
Planning is moving forward for a natural gas-fired power plant facility to be developed in Kearny. The new facility will be a key component in the NJ TransitGrid Project, the ground-breaking microgrid system that will power pertinent rail lines during power outages resulting from bad weather and future Superstorms (i.e. Hurricane Sandy). To be located on the Hackensack River, the Kearny facility will provide emergency power to the NJ TRANSIT Hudson-Bergen Light Rail, the Morris & Essex Line between Maplewood and Hoboken, and the Northeast Corridor between New Brunswick and NY Penn Station.

Construction Begins on $570 Million Penn Station Renovation Project
Eyewitness News, WABC-TV, June 17, 2019
The Penn Station Renovation Project broke ground this past Monday with the start of construction at the station. The renovation project, anticipated to be completed in approximately one year, will add a new station entrance at 33rd Street and Seventh Avenue, widen the corridor, and implement other amenities, i.e. new information systems. To accommodate the work, NJ TRANSIT began diverting some trains to the Hoboken Terminal as of Monday, and the MTA has closed some ticket machines and windows.

Four Towers, 2,360 Units Proposed for the Edge of Downtown Jersey City
Chris Fry, Jersey Digs, June 17, 2019
Manhattan Building Company recently announced its proposal to develop several lots in the Bates Street Redevelopment Area in Jersey City. The company has partnered with STUDIO V Architecture, a New York-based firm, to design the new plan to reconnect the South End and Van Vorst communities. As the Master Redeveloper for the area, Manhattan Building Company has proposed the development of one 50-story tower. This tower would be joined by others, ranging between 23 and 46 stories, to be developed by other area property owners.

Red Bank Lost its Mojo to Asbury, Long Branch. Could Downtown Housing Bring it Back?
Shannon Mullen, Asbury Park Press, June 17, 2019
Since the economic bounce back from the Great Recession, the Borough of Red Bank has seemingly been overlooked in favor of places such as Long Branch and Asbury Park. However, new development projects in downtown could reinvigorate this transit-oriented town. The downtown is bustling with the introduction of two new development projects: The Element, a 35-unit apartment building, and the Denholtz Properties’ newest corporate headquarters. Currently Denholtz Properties is developing The Rail at Red Bank Station, a 45-unit residential project next to the train station. In April, the developer received zoning board approval for Southbank, a 10-unit townhouse project on the riverfront.

Richmond Mall to Transform into ‘Village’
Maria Rantanen, Richmond News, June 15, 2019
Shape Properties anticipates breaking ground by early 2020 on the construction of a new transformative development project in Richmond, VA, Live at CF Richmond Centre. The developer recently received approval for phase one from the City’s Development Permit Panel. Live at CF Richmond Centre is a mixed-use project intended to serve as the hub of a high-density, transit-oriented community with high-rise residential buildings and street-oriented retail and services. The project will be fixed around a public plaza, turning the once traditional mall into a more pedestrian-friendly experience.

Plans for Homes, Shops and Offices Along Light Rail in Charlotte Clear Major Hurdle
Danielle Chemtob, The Charlotte Observer, June 17, 2019
A Lynx Blue Line train left the UNC Charlotte Station for the first time on Friday, June 14th. Four years of construction preceded the trip, which marked the opening of the Charlotte Light-Rail extension. This past week, the Charlotte City Council gave approval to plans for several large developments, each in proximity to the light rail. These include Dilworth Artisan Station (a 110-year-old building in the South End), a mixed-use TOD project at the former site of the Metromont Concrete Plant, and the redevelopment of six single-story buildings into retail and office space in Lower South End, located behind Scaleybark Station.

MARTA and GDOT Propose Transit Stations and Express Lanes Along 400
Elizabeth Nouryeh, Marietta Daily Journal, June 18, 2019
The Metropolitan Atlanta Rapid Transit Authority (MARTA) and the Georgia Department of Transportation (GDOT) recently spoke with Alpharetta City Council to discuss the construction of bus rapid transit stations and express lanes along Georgia State Route 400. The new Bus Rapid Transit (BRT) would follow a 12-mile route from Windward Parkway to North Springs, where the BRT route would connect with MARTA’s existing heavy rail. The proposed project, to be approved or denied in November 2020,  has an investment cost estimated at $312 million to $414 million.

Holland First Community to Sign On to Regional Transit Pilot
Kate Carlson, Hillsdale Daily News, June 21, 2019
In Michigan, the Holland City Council voted unanimously to sign on to a resolution that supports the West Michigan Express Pilot Project. This initiative, led by the City of Hudsonville, proposes the construction of a commuter transit system between the City of Holland and Grand Rapids for the pilot phase with the possibility of involving a high-speed commuter train in a later phase. Holland is the first community to vote for the resolution; the project still needs support from other local municipalities in order to secure both private and state funding. If funding is secured, the pilot project could potentially begin as early as 2020.

Sunday Parking Fees Cover Free Transit for Victoria Students
Canadian Press, Kamloops Matters BC News, June 12, 2019
The Victoria Regional Transit Commission has approved a plan, presented by the Victoria City Council, that uses parking revenues to fund free transit passes to students 18 years old or younger who live in Victoria. The Youth Pass Program allows for approximately 6,350 eligible students to receive a free transit bus pass for the school year as part of Victoria’s plan to combat climate change by promoting public transit to aid in the reduction of carbon emissions. The program comes at an estimated cost of $57,000 per year, which will be allocated from the recently implemented parking fees on Sundays in the City’s downtown.

Transit Riders Give Thumbs Up to Northern Transfer Station
Elaine Della-Mattia, The Sault Star, June 19, 2019
The Canadian City of Sault Ste. Marie has entered into a partnership with Sault College to create a plan for a northern transit transfer facility on a portion of the college’s property. The new transfer station, anticipated to be located on the east side of Essar Hall, would be useful to both students and commuters, as the site choice will make travel east, west and north easier on transit riders by eliminating the need to travel downtown for transfers. With the receipt of a report in August, the City Council will make a decision later this summer. If approved, the facility could be completed by the end of 2019.