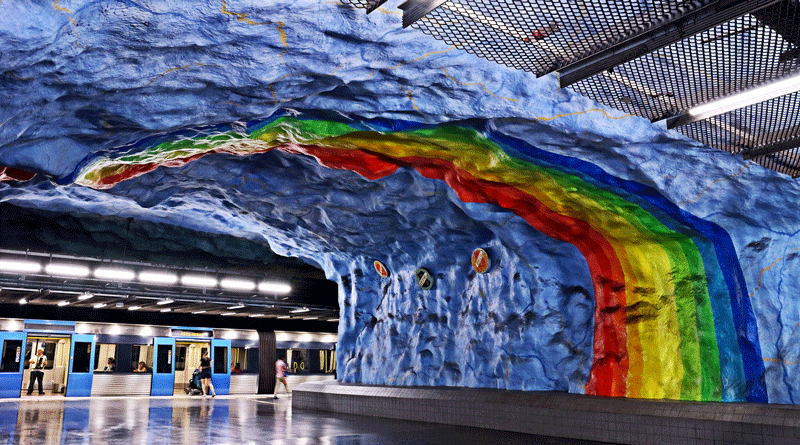 OMNY to Land at All PATH Train Stations in Manhattan, New Jersey
Michelle Bocanegra, AM New York, June 21, 2019
The Port Authority of New York and New Jersey recently unveiled plans to bring the MTA’s new OMNY system to all 13 PATH stations throughout Manhattan and New Jersey, beginning as early as 2021, with all OMNY installations to be completed by the end of 2022. This proposal is a step toward achieving the agency’s goals to increase ridership capacity and performance on the PATH System and is part of its $1 billion improvement initiative. The implementation of the OMNY technology will provide additional entrance options to the PATH for interstate commuters traveling between New Jersey and New York, providing a more seamless transfer from PATH to the NYC subway.

Prism Capital, Northwestern JV Purchase Redevelopment Site in Woodbridge
John Jordan, Globe St, June 24, 2019
Prism Capital Partners and Northwestern Mutual Insurance Co. are partnering in a venture to acquire a former car dealership site located adjacent to the Woodbridge Station in downtown Woodbridge. The site will be redeveloped into a key mixed-use project for which Prism Capital Partners will serve as the operating partner. The planned project will include 232 apartments and 12,000 square feet of retail space. Demolition work on the site is scheduled to begin in July.

Bayonne, NJ Transit to Partner on Residential/Retail Development at 34th Street Light Rail Station
Michaelangelo Conte, The Jersey Journal, June 25, 2019
NJ TRANSIT entered into a public-private partnership with the City of Bayonne this past Thursday (6/20) to undertake the redevelopment of a parking lot at the 34th Street Hudson-Bergen Light Rail Station. The planned 34th Street TOD Redevelopment Project will be a multi-unit, mixed-use building on the 4½-acre site and will include residential units, and office, retail and community spaces.

Renderings Out for Former Mercedes USA HQ Redevelopment in Montvale
Mario Marroquin, Jersey Digs, June 26, 2019
Earlier this month, officials in Montvale unanimously approved a proposal for a $150 million redevelopment project by Englewood-based developer The S. Hekemian Group. Designs have been released for Triboro Square, a mixed-use redevelopment designed by CallisonRTKL. Plans call for a total of five buildings to be built adjacent to the Shoppes at DePiero, a retail center also developed by Hekemian. The new project will feature up to 139,500 square feet of retail space and 40,500 square feet of office space, as well as a built-to-suit, mixed-use office and retail building, a 150-room hotel, and 308 residential units.

1,500 Seattle Public-Housing Residents to Get Transit Cards
Associated Press, Komo News, June 22, 2019
Approximately 1,500 Seattle Housing Authority residents will receive free unlimited ORCA passes for use on the City’s public transportation system by way of a one-year, $1 million pilot program launched by Mayor Jenny Durkan and her administration. In order to be considered for the program, applicants must be between 19 and 64 years old, earn less than 30 percent of the area median income, and reside within the Seattle Transportation Benefit District. The Seattle Housing Authority began assisting qualified residents in signing up for the program as recently as June 21.

Light Rail Arrival Builds Interest in Lynnwood’s City Center
Lizz Giordano, Herald Business Journal, June 23, 2019
Merlone Geier Partners have released preliminary plans for the first multi-building complex development for Lynnwood’s City Center in Washington State. Project plans represent an effort to anticipate the arrival in 2024 of the Sound Transit Link light rail to the city located 15 miles north of Seattle. The mixed-use Northline Village will be built up the street from the transit center and comprises 1,370 housing units, 5,000+ parking spaces, and approximately 740,000 square feet of retail and office space. Conceptual plans for the project were available to the public for preview last week during an open house. Approval for the project is anticipated in the next several months.

MTA Extends $5 LIRR Tickets Between Brooklyn and Queens for Another Year
Clayton Guse, New York Daily News, June 24, 2019
Officials from the Metropolitan Transportation Authority (MTA) announced a one-year extension for the agency’s Atlantic Ticket Program. The Atlantic Ticket Program allows Long Island Rail Road (LIRR) commuters traveling between Brooklyn and Queens to purchase one-way rides between all three stations in Brooklyn and seven stations in Queens for $5 (normally priced at $10.25) or weekly unlimited-ride tickets for $60 (normally $104.25). The pilot program, first implemented in June 2018, has been used for an estimated 1.3 million trips and has helped ease congestion at New York Penn Station by encouraging riders to board at the Atlantic Terminal in Brooklyn.

Lyft to Provide Metro-Subsidized Shared Rides for Late-Night Workers Starting in July
Andrew Glambrone, Curbed Washington DC, June 25, 2019
Washington, D.C. Metro will launch a one-year pilot program starting July 1 that will subsidize shared rides via Lyft for late-night workers who will be affected by reduced service while the agency advances its safety and reliability improvement program. The transit agency will provide up to a $3 subsidy per ride for a maximum of 40 rides per month on a first-come, first-serve basis. Riders with registered SmarTrip cards are eligible to receive the subsidy for trips between midnight and 4 a.m.

Public Transport As Art Exhibition: How Stockholm Sets the Bar High for Culture in Transit
Gabriel Leigh, Forbes, June 24, 2019
Stockholm Metro transit stations are quite literally works of art, dating back to 1956 with installation of Stockholm’s first public art project for the metro stations. SL, the agency that operates the Stockholm Metro, supports the role that art plays in the public transit system and demonstrates that support through its latest project, the SL ArtGuide, an app that provides an audio guide to the art displayed within 21 stations. Artwork, seen in 94 of the system’s 100 stations, draws visitors not only to the stations but also to the city.

Driverless Rail Transit Line Recommended to Link Calgary Airport
Kenneth Chan, Urbanized, June 24, 2019
Calgary, AB has explored three options to connect its rail transit service to Calgary International Airport and has recommended automated driverless transit over bus rapid transit (BRT) and light rail transit (LRT). A fully grade-separated rapid transit line, which would operate as a standalone line, would travel between the future Green Line extension’s 96 Avenue NE Station and the future Blue Line extension’s 88 Avenue NE Station. Similar to the SkyTrain System in Vancouver, this system would have construction costs comparable to those for LRT but will accommodate increased capacity with higher train frequencies rather than longer trains.

Canadian City Launches Rapid Transit System
Smart Cities World News Team, June 26, 2019
The Waterloo Region (Ontario) recently launched a new rapid transit system, the ION LRT, at the Fairway Station in Kitchener. The ION LRT is a 16km light rail system serving Kitchener, Waterloo, Cambridge and surrounding rural municipalities. It is a key component in the Regional Master Plan for sustainable mobility, which aims to form one urban area from the three cities. The light rail system, fully funded by all three levels of government, has been integrated into Grand River Transit (GRT), the Region’s existing public transport service, in order to be flexible and accommodate population growth.

So what exactly is the Penang Transport Master Plan and how is it being funded?
Opalyn Mok, Malay Mail, June 27, 2019
The northwestern Malaysian State of Penang is ready to release components of the Penang Transport Master Plan (PTMP), a controversial document started in 2009 under Pakatan Harapan’s administration as a concept plan to address traffic and transportation issues within the state. The PTMP is meant to serve as a transport blueprint–an integrated transport framework—designed to improve connectivity within the state via private, public, land and sea transportation systems. The PTMP’s original timeline anticipated a 2016 start to implementation as a way to solve traffic woes by 2030. However, the document was just recently approved to move forward into the detailed design and land acquisition stage. Chow Kon Yeow, Penang Chief Minister, hopes to see the PTMP projects implemented by late 2020 or 2021.

What We Are Reading: March-April 2015

May 11, 2015 Stephanie DiPetrillo Comments Off on What We Are Reading: March-April 2015