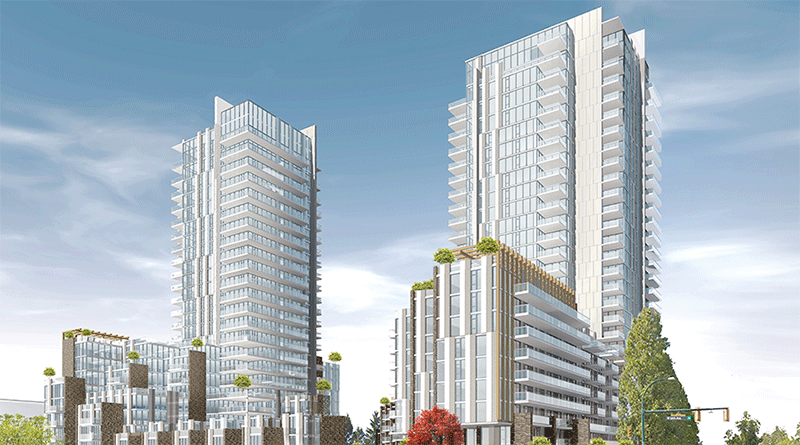 An artistic rendering of parcels A & C of the Pearson Dogwood Redevelopment in Vancouver, BC. Courtesy of IPI Group.

Somerville Landfill Transit Village Expected to Be Completed in 2023
Mike Deak, Bridgewater Courier News, July 1, 2019
Somerset Development has purchased the portion of the Somerville Landfill immediately adjacent to the Somerville Station from NJ TRANSIT for $11 million. The station is located on the Raritan Valley Line. The planned mixed-use project, called the Somerset Station Transit Village, will create 4,000 square feet of retail space, 370 apartments, 156 townhomes, two parking garages and a 4,000 square-foot community civic center on the 31-acre site. Phased construction of the transit-oriented community is expected to begin later this summer with completion anticipated in 2023.

Financing Approved for 40-Acre Transit Village in Somerville
Rod Hirsch, TAPinto, July 1, 2019
In another step forward for the Somerset Station Transit Village project, developer Somerset Development has secured critical financing from Investors Bank. The project is a key component in the long-awaited transformation of the Borough’s Landfill Redevelopment Area into a vibrant transit village. Developers continue to hold meetings with local, county, and state officials to work out the details of the project. The project is based on a “wish list” included in the Borough’s Master Plan.

A Mega-Metropolis is Developing in Sayreville
Linda Lindner, NJ Biz, July 1, 2019
North American Properties and Cooper Robertson have partnered to redevelop 418 acres of brownfield in Sayreville into a mixed-use, village-style development spanning two miles along the banks of the Raritan River. The $2.5 billion mixed-use project, Riverton, is planned to create a fully walkable city layout to include 2 million square feet of entertainment space, retail, housing, hotels, offices and various other commercial uses. The development would be the largest mixed-use project in the state. The first phase of construction for the project is scheduled to begin in spring 2020 with planned openings as early as 2021.

Sherrill Welcomes ‘The Station’ to Morris County’s Innovation Economy
Beth Kujan, Morristown Green, July 2, 2019
The first co-working space in downtown Chatham, The Station, held its grand opening on Tuesday. The Station is supported by the Morris County initiative Startup Moveup Morris, a program focusing on small businesses and promoting co-working spaces, incubators and accelerator projects in municipalities across Morris County. Boxcar, which has moved its headquarters to The Station, will rent desks to businesses, and offer scooters to its employees to encourage this transport mode.

Google Maps Can Now Warn You about How Crowded Buses and Trains Are
Dalvin Brown, USA Today, June 28, 2019
Google has announced two new features in the Google Maps app. One predicts how crowded a bus will be at a specific time of day. The prediction is based on data Google collected by asking app users about crowding conditions on their bus. The app will tell users whether their transportation option has seats available or if there is “standing room only.” The other new feature, “live traffic delays,” will inform commuters of any bus delays, information on the duration of the delay, and the current location of the bus. The new features will be available in select cities.

BPDA Approves the Transit-Oriented Development in Maverick Square Project
John Lynda, East Boston Times, June 29, 2019
The Boston Planning and Development Agency (BPDA) approved a proposal submitted by the MG2 Group (MG2) for a mixed-use project at 2-10 Maverick Square. Located directly across from the MBTA’s Blue Line at Maverick Station, MG2’s project will transform the vacant site into a striking, six-story building comprised of an estimated 10,710 square feet of retail, commercial, and restaurant space, as well as 25 residential rental units. The project will provide about $40,000 in public realm improvements and additional  funding for a “Transportation Action Plan” for the PLAN: East Boston study area.

ODOT Creates Office for Mass Transit
Christian Tabak, The Journal Record, July 1, 2019
The Oklahoma Department of Transportation (ODOT) has publicized the creation of the Office of Mobility and Public Transit. The newly formed office was enacted under House Bill 1365 to coordinate statewide efforts to expand public transportation infrastructure. The legislation created a major statewide public transit policy to address major expansions to existing networks. The Office will be responsible for managing the state’s public transit systems and federal grants awarded to the agency, with the goal of improving the quality of transit across the state, particularly in less-connected, rural areas.

New Rail Project to Connect Gurgaon, Faridabad with Other Districts of Haryana
Live Mint, July 1, 2019
The board of the Haryana Rail Infrastructure Development Corp Ltd (HRIDC) in New Delhi approved the Haryana Orbital Rail Corridor Project on June 29. The Project is a new 130-kilometer, double rail line connecting Palwal to Sonipat, with completion anticipated for February 2020. The project aims to boost development along the KMP Expressway economic corridor running from Palwal to Sonipat, and to ease congestion and pollution in Delhi.

Public Transit to Take Contactless Debit Cards, Smartphone Payments
Zack Newmark, NL Times, July 3, 2019
The Dutch Government aims to begin phasing out the current payment method for public transportation, the OV Chipkaart, to make way for new payment options to be available beginning in 2021. The current OV card system does not easily accommodate other payment methods, and does not guarantee necessary technical support into the future. The NS, the national public rail authority, announced plans to test the use of contactless debit card systems as the alternative to the OV card, which will be eliminated by 2023.