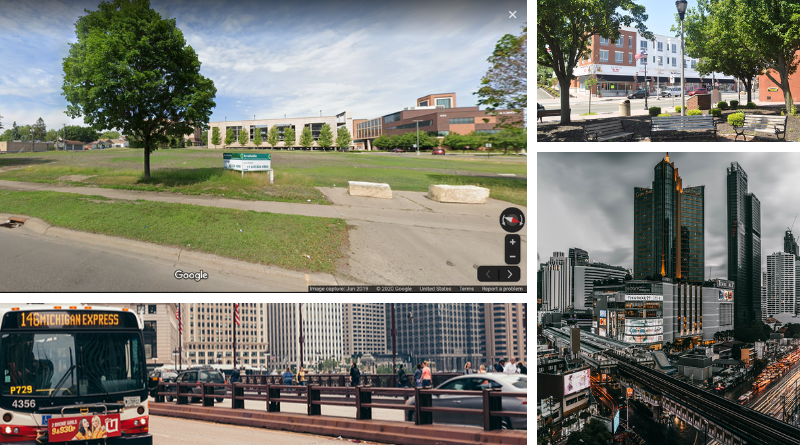 Photos: Multiple Development Projects Underway in Union Center
Jared Kofsky, Jersey Digs, March 18, 2020
In Union Township, mixed-use development projects are in the planning or construction phase in the community’s downtown, known as Union Center. In the absence of a train station near the downtown, the township offers a free shuttle service to the NJ TRANSIT Union Station near Kean University and buses connect the business district with Elizabeth, Linden, Bloomfield, Bridgewater, Newark, and the Port Authority Bus Terminal in Manhattan. Major developments in the area include apartment complexes, co-working spaces, a supermarket, and movie theaters.

Transit is in Trouble Due to Coronavirus. This Green New Deal Plan Could Help.
Alissa Walker, Curbed LA, March 20, 2020
Most transit agencies are reporting at least a 50 percent decline in ridership over the past week. With decreasing ridership and increasing operational costs due to sanitization, several transit systems in the US have announced service cuts and the cancellation of overnight services, making mobility a problem for transit-dependent commuters. However, some cities are making transit free to serve health care workers and front-liners, offering shuttle services, and dedicating travel lanes to transit and emergency vehicles. As the US economy slows, affordable and efficient transit becomes more important than ever.

When the World Stops Moving
Laura Bliss, CityLab, March 19, 2020
Since “shelter in place” and lockdown orders were issued last week, offices, schools, businesses, and public institutions have temporarily shuttered down, and fewer and fewer people are on the road. Other modes of mobility are similarly affected; US public transit systems are seeing a massive decline in ridership and huge losses in revenue. As lawmakers debate and discuss aid packages for Americans, worries rise that industries like transit and transportation are being left out of the discussion.

Allapattah Midrise Plans 47 Micro-Unit Apartments
John Charles Robbins, Miami News Today, March 17, 2020
The 2323 Pointe Group LLC is seeking approval from the City of Miami for an eight-story mixed-use residential building in Allapattah, a neighborhood to the northwest of downtown Miami. The proposal calls for a mix of commercial,­ office, and residential uses, including 116 residences, of which, 47 are to be micro-unit apartments. The project will also include 129 parking spaces. The property is located within the TOD area of Earlington Heights Metrorail Station.

Burlingame Project Gets Positive Review
Austin Walsh, San Mateo Daily Journal, March 16, 2020
The Burlingame Planning Commission praised a proposal to replace a gas station and office lot on El Camino Real and Murchison Drive with new housing. The proposal has not yet been approved, but is scheduled for more thorough review in the months to come. The seven-story tower will add more density near the Caltrain and BART Milbrae train station, with 169 units and other amenities. Developers have also expressed interest in properties adjacent to the lot.

Proposed Apartments Set Up Clash Over Gentrification in St. Paul’s Frogtown
James Walsh Star Tribune, March 15, 2020
Local officials and Frogtown residents are closely monitoring the pending sale of a vacant two-acre property to Alatus, a luxury housing developer based in Minneapolis. The Amherst H. Wilder Foundation, a local philanthropic foundation aimed at fighting poverty, has tentative plans to sell the property to Alatus, which has proposed building 226 market-rate apartments, sparking debate and fears of gentrification and displacement in this lower-income neighborhood. As part of the project, Alatus has proposed subsidizing either a 4,500 sq. ft. community-based commercial tenant, or between six and twelve apartments for families earning 40 to 60 percent of the area median income. Area district council officials have found both options to be inadequate. Housing costs have been rising since the development of the Green Line light rail along University Avenue. Alatus is working with city officials to subsidize the project, seeking a $1.25M grant for transit-oriented development from the Metropolitan Council.

Bill Boosting RDA’s Transit-Oriented Development Role Will Have to Wait Until Next Year
Andrew Steele, NWI Times, March 14, 2020
On Thursday, the Indiana General Assembly ended its session without advancing House Bill 1279, legislation supporting transit-oriented development in Northwest Indiana.   The measure, if it had been enacted, would have granted the Northwest Indiana Regional Development Authority (RDA) the ability to create nonprofit local development corporations to engage with property owners and private companies in transit-oriented development projects. Action on the bill stalled on Senate provisions to fund IndyGo, which were opposed by Indianapolis-area legislators. RDA President and CEO Bill Hannah has not lost hope in the long-term goal. “We plan to come back next year,” he says, “We’ll spend time developing it further. All these things are long-term.”

The Mystery of the Missing Bus Riders
Emily Badger and Quoctrung Bui, New York Times, March 13, 2020
Since 2013, as American cities have grown and the labor force has expanded, fewer and fewer people have been taking the bus. Georgia Tech researchers recently shared findings that show that in neighborhoods in Minneapolis, Atlanta, Miami and Portland, Oregon, which are home to large numbers of college-educated residents, ridership has declined, especially in those areas with predominantly white populations. In addition, preliminary findings from an ongoing Transportation Research Board research project document a relationship between falling bus ridership and the increasing popularity of ride-hailing services such as Uber and Lyft.

INDONESIA — MRT Jakarta Pursues Seamless Public Transit Integration
Sausan Atika, The Jakarta Post, March 16, 2020
­MRT Jakarta will form two new subsidiaries and a joint venture to advance its goal of creating an integrated public transportation system. The new subsidiaries would be tasked with developing supporting facilities and transit-oriented development projects. The joint venture would focus on ticket integration among operators including the MRT, LRT, Transjakarta, and angkot (public minivans). The TOD subsidiary will coordinate with property developers and investment institutions, and is expected to begin operations by midyear. Free registration is required to access article.

THAILAND — Bangkok Hopes Extended Railway Will Ease Traffic Chaos
Yohei Muramatsu, Nikkei Asia News, March 15, 2020
Urban transformations in Bangkok that began in late 2019 are expected to double the city’s railway system to 300 km by 2023, making it nearly the same size as the Tokyo subway. Total investments in its development are projected to reach 300 billion baht ($9.54M), a sizeable investment towards the government’s mission to combat vehicular congestion and encourage public transit ridership. The city was named one of the world’s most congested cities in 2017. These transit improvements have spurred development throughout the area, sparking the formation of new city centers. For example, the Charoen Pokphand Group, the nation’s largest conglomerate has invested 30 billion baht for a mixed-use development near Punnawithi Station that will comprise residential, office and commercial space and be the site of True Digital Park, a startup campus designed for 25,000 workers, the largest in Southeast Asia.