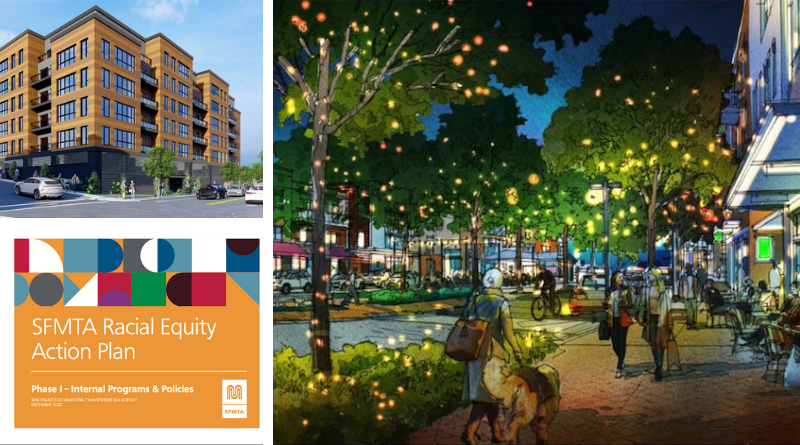 Politico brought together 12 transit leaders, designers, and thinkers to discuss the impact of the pandemic on public transportation, and identify solutions for the future. Most participants agreed that agencies should focus on their core constituencies, rather than on commuters who may use a service only a few times a week. Participants suggested additional resources be devoted to bus service, which is has lower capital and operating costs and which is more flexible to service changes than rail. The discussion highlighted inefficient, overlapping jurisdictions and funding structures as impediments to change. Yonah Freemark, of the Urban Institute, suggested changes to public policy—which has long prioritized cars—to increase support of efficient transit systems. Finally, panelists proposed that data and metrics should be updated to reflect priorities—for example, adding a carbon emissions cost to a project evaluation, or including induced traffic demand for new highway projects.

CALIFORNIA—COVID Recovery: Bay Area Transit Agencies See Ridership Numbers On The Rise
CBS SF Bay Area, May 25, 2021
Transit ridership continues to grow in the Bay Area, though unevenly. Weekday ridership on BART subways has climbed to 84 percent of what it was before the pandemic, and 71 percent on weekends. However, ridership aboard CalTrain commuter rail remains at 9 to 10 percent of overall pre-pandemic levels. On the Santa Clara Valley Transportation Authority (VTA) light rail system, which serves the area south of the San Francisco Bay, ridership has grown to nearly 25 percent of its 2019 levels.

Pandemic-Stricken Mass Transit Would get $85 Billion in Biden Stimulus Plan – a Down Payment on Reviving American Cities
Ruth Steiner, The Conversation, May 21, 2021
Steiner, Professor of Urban and Regional Planning at University of Florida, discusses how, if passed, President Biden’s infrastructure plan would revitalize America’s aging public transportation network—given a D-minus by the American Society of Civil Engineers in a recent report. She argues that many people in cities want to take transit, but the system requires investment to be viable. She notes that COVID-19 risk on transit is low, so long as adequate safety measures are taken, such as mask-wearing and proper ventilation. In other counties, such as Korea, China, and Taiwan, agencies managed to carry between 70 and 90 percent of regular ridership without an increase in new cases.

Commuter Rail Reform Faces High Labor, Infrastructure Costs
Jake Blumgart, Governing, May 19, 2021
The COVID-19 pandemic has dramatically transformed commuting patterns, particularly for “boutique” commuter rail service that caters to white-collar workers. Proposals to transform commuter rail into “Regional Rail,” that is, fast, frequent service outside of the traditional workday, face challenges related to heavy staffing, and older equipment and infrastructure. Transit systems throughout the U.S., including SEPTA, are exploring changes, and can find a model in Europe where train systems run more efficiently and economically.

JERSEY CITY—Alpine Residential Selected to Create Scholars Village at SciTech Scity
Tom Bergeron, ROI-NJ, May 26, 2021
The Liberty Science Center has chosen developer Alpine Residential to construct Scholars Village, the first phase of its “SciTech Scity” concept, which will include residential space, innovation hubs, a new high school, and retail, all oriented around technological progress. Scholars Village, the residential component, will add 400 market-rate units to the area. The complex is accessible via the Liberty State Park Station of the Hudson Bergen Light Rail.

NJ Transit Unveils Electric Bus Plan, But It Has to Compensate for Low Battery Range
Larry Higgs, NJ.com, May 26, 2021
NJ TRANSIT announced a plan to begin an electric bus pilot program in Newark and Camden, as well as a new Northern bus garage for charging. For some bus routes, this switch to electric is simple. However, for buses with longer ranges, such as in South Jersey, innovative solutions for charging must be developed. The announcement is part of NJ TRANSIT’s efforts to begin purchases by 2032 in order to achieve a zero-emissions bus fleet by 2040, deadlines set by the state’s Electric Vehicle Law.

ORANGE—Proposal for 87-Unit Development in Orange Up for Approval
Jared Kofsky, Jersey Digs, May 24, 2021
The Orange Planning Board will hear a developer proposal to construct a 7-story building with 87 units at the corner of Mountainview Avenue and Scotland Road. The development would be within walking distance of Orange’s two NJ TRANSIT stations.

CALIFORNIA—SFMTA Releases Plan for Racial Equity
Marybeth Luczak, Railway Age, May 25, 2021
The San Francisco Municipal Transportation Authority published a plan to address equity concerns in its structure and operations. Internal steps include hosting a series of listening sessions, hiring more diverse staff in departments such as the Cost Control Group, and giving quarterly updates on progress to close “racial equity deficiencies” outlined in a 2019 report. In its next phase, the plan will examine external issues, such as making the planning, community engagement, and decision-making processes more equitable.

The Cumulative Tax Burden of Being Black in the City
Brenton Mock, Bloomberg City Lab, May 20, 2021
In her new book, The Whiteness of Wealth, Emory Professor Dorothy A. Brown argues that, historically, tax policy has been written to structurally advantage white, suburban households. According to Brown’s research, most black Americans are renters, and thus do not have access to some tax savings, such as the federal mortgage interest tax deduction. The American tax code was created at a time when African Americans were not legally recognized as equal, and as such, disproportionately burdens them to this day.

PHILADELPHIA—Philly to Launch Loan Fund for Black and Brown Affordable Housing Developers
Taylor Allen, WHYY, May 19, 2021
The City of Philadelphia has launched the Philadelphia Accelerator Fund, a loan fund seeded with $23 million aimed at helping developers of color build affordable housing by providing them with enough capital to compete with market-rate developers for real estate. The concept came from discussions in 2018 during the development of the City’s Housing for Equity plan, and is modeled after San Francisco’s Housing Accelerator Fund.

PENNSYLVANIA—Transit-Oriented Development and a Potential New Path for Growth in Pittsburgh
Ryan Deto, Pittsburgh CityPaper, May 26, 2021
Pittsburgh, with a robust light rail and Bus Rapid Transit (BRT) network, has a variety of corridors suitable for transit-oriented development. However, a plurality of municipalities in Allegheny County have historically limited this development with restrictive zoning. But planners in the Borough of Dormont, which has three light rail stops, have proposed revisions to the zoning code to allow buildings of 3 to 8 stories in station areas. Dormont planners hope that the TOD zoning changes will bring in more affordable units, diversify the municipality, and stimulate the local economy.

COLORADO—Lone Tree Breaks Ground on First Affordable Housing Property
Dennis Huspeni, The Denver Gazette, May 26, 2021
A developer in the suburban city of Lone Tree, south of Denver, has broken ground on an affordable housing project adjacent to the Regional Transit District’s Ridgegate Parkway Station. The 67 units will be available for tenants making between 30 and 80 percent of Area Median Income (AMI), with rents ranging between $500 and $1,300 dollars depending on income. The project was partially funded with a Colorado Housing and Finance Authority award.

MARYLAND—This Tool Helps Create Equitable Development in Communities Surrounding the Purple Line
Cyrus Chimento, Greater Greater Washington, May 21, 2021
Researchers at the University of Maryland released an online tool to understand the context for potential equitable transit-oriented development along the Purple Line light rail, currently under construction in Montgomery and Prince George’s counties. The tool provides a visual representation of the complicated patchwork of zoning regulations the corridor passes through. The interactive map is a resource for discovering where along the line more housing development might be built, and then understanding the regulatory hurdles to be overcome, as well as existing plans for a particular area.

TENNESSEE—Mayor Directs Nearly $10 Million For Affordable Housing Grants
Nashville.gov, May 19, 2021
Nashville Mayor John Cooper has allocated a total of $30 million for the production and preservation of affordable housing in the city. One project would expand the Mercury Courts transit-oriented development with additional units. The complex sits along a planned BRT route on Murfreesboro Pike.

INDIA—388 Tenants to Get 450 Sq Ft Apartments
Kamal Mishra, Mumbai Mirror, May 26, 2021
A developer plans to build two 40-story towers in a former workers’ tenement, or chawl, that also once housed a famous, now-imprisoned gangster. Current residents of the chawl will be given much larger units, between 120 sq. ft. to 450 sq. ft., in the new high-rise structures. The residents will be served by the planned Green Line 11, which is currently in development as part of a large transit expansion in the Mumbai metropolitan region.

CANADA—White: Midfield Redevelopment Moves Former Mobile Home Park to Urban Village
Richard White, Calgary Herald, May 21, 2021
The City of Calgary will redevelop a 24-acre mobile home park that was home to 250 people. The mid-rise, master-planned community to be known as Midfield Heights will house as many as 2,000 residents. The project will be built adjacent to a MAX Orange Line BRT station and will be patterned on the Dutch design concept of “woonerf” streets, or corridors designed to allocate space equally to pedestrians, bicycles, and cars.

UNITED KINGDOM—Skyscrapers Rising Next to Vacant Towers Mark New City of London
Jack Sidders, Bloomberg CityLab, May 19, 2021
According to Bloomberg and City of London data, at least 18 new skyscrapers are currently in the planning process, signaling that developers are still betting on a robust return of office workers. Although London has a large surplus of office space, these investments are targeted toward a perceived market for new, premium workspaces, with up-to-date amenities such as newer ventilation systems. But, as this development boom continues, there are still some who question whether the demand is there.