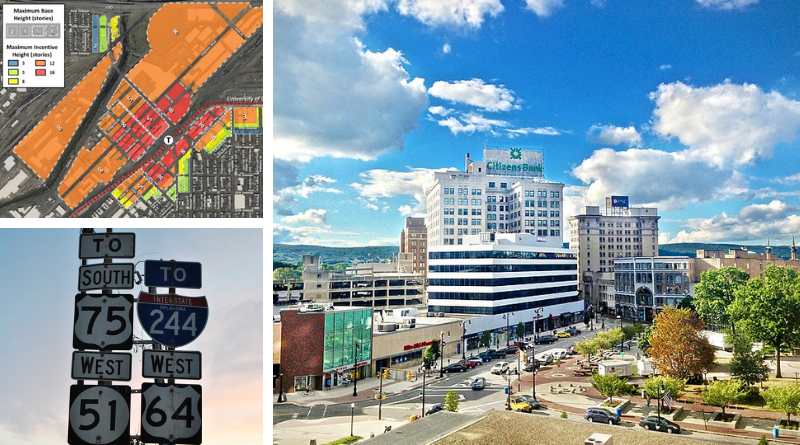 The San Diego Association of Governments (SANDAG) released a $160 billion regional plan for transportation improvements, including frequent, high-speed commuter rail, upgraded trolleys, and upgraded bus service. The new transit connections would coincide with a massive plan by the United States Navy to build 10,000 apartment units in high-rise buildings in the Midway District, as well as retail space and a “San Diego Grand Central” mobility hub. While California’s population growth is slowing, SANDAG leaders are counting on future density to occur within the transit upgrade area.

PENNSYLVANIA—How a Hobbled Main Street Survived the Pandemic ‘Asteroid’
Jonno Rattman, Michael Corkery, Alana Celii, and Gabriel Gianordoli, The New York Times, June 1, 2021
The New York Times chronicles four blocks of Main Street in Wilkes-Barre, Pennsylvania throughout the COVID-19 pandemic, following restaurants and small shops that had to pivot to stay afloat, as office workers and university students have been largely absent for the past year. Some grew online delivery services and took Paycheck Protection Program (P.P.P.) loans, while others folded.

NEWARK—280-Unit Development Could Replace Building Around Newark’s Old Ballantine Brewery Site
Jared Kofsky, Jersey Digs, June 2, 2021
A developer has applied to the City of Newark for approval to build a six-story apartment building in the city’s Ironbound neighborhood, on the site of the former Ballantine Brewery. While the developer, Shorewood Real Estate Group, mentioned an affordable housing component on their website, they did not include specifics. Residents of the 208-unit building would be served by NJ TRANSIT’s bus route 1 to Jersey City, and the 108 bus to the Port Authority Bus Terminal.

WEST WINDSOR—$300M Planned Community Revealed For West Windsor, New Jersey
Sebastian Morris, New York YIMBY, June 2, 2021
Developer Avalon Bay Communities, in conjunction with Welltower Inc, will redevelop an office complex adjacent to Princeton Junction Station, building out a mixed-use residential community with 535 apartments, 48 condominiums, and 150 townhomes. The housing units would be mixed-income, and 135 of the apartments would be reserved for seniors. A press release announcement did not specify whether the abundance of parking was included with the project, or to be shared with NJ TRANSIT’s Princeton Junction Station parking facilities.

NEWARK—New Developer Buys Former Newark Bears Stadium Site and Secures Council Approval of Changed Plans
Bernard Council, Newark Daily News, May 26, 2021
The eight-acre site of the former Newark Bears will be redeveloped into a mixed-use complex with 4,200 residential units and 100,000 sq. ft. of commercial space. Under Newark’s Inclusion Ordinance, five percent of the 4,200 units will be affordable, and the City will receive $15 million for the Affordable Housing Trust Fund, to develop additional units elsewhere. Another portion of the agreement involves a training and retention program to incorporate Newark residents in the construction process. The development, at 450 Broad Street, is within close walking distance of Riverfront Stadium stop of the NJ TRANSIT’s Newark Light Rail, as well as Newark Broad Street Station.

This Arcane Manual Could Pave the Way to More Human-Friendly Cities
Aarian Marshall, Wired, June 1, 2021
The Manual for Uniform Traffic Control Devices (MUTCD) is the text that standardizes transportation signage and infrastructure across the country. Published by the Federal Highway Administration (FHWA), the MUTCD will soon be getting an update. Rules for crosswalks construction and speed limit implementation could be updated, adding flexibility to planners and engineers concerned with solving mobility safety issues. More than 26,000 comments have been submitted to FHWA so far, including one from Sidewalk Labs, a subsidiary of Google’s parent company Alphabet, calling for rules that “more closely align with the equity, safety, and sustainability goals of American cities.”

OKLAHOMA—Black Wall Street’s Second Destruction
Carlos Moreno, May 31, 2021, Next City
The destruction of Black Wall Street has received a lot of attention of late, but the popular story being told is incomplete. A full account does not stop with  the Greenwood Massacre, and  the events of June 1, 1921 that destroyed the neighborhood, but the process of “urban renewal” that came 45 years later. After the massacre, many residents and businesses owners rebuilt their homes and businesses, only to have the construction of I-244, US 75, and other highway infrastructure obliterate the thriving Greenwood and Kendall-Whittier neighborhoods. Moreno discusses how racially charged narratives shape public policy and have disastrous effects on communities.

MARYLAND—An Unsparing New Geography of ‘American Apartheid’
Andrew Zaleski, Bloomberg CityLab, May 27, 2021
The Black Butterfly, a new book by Morgan State University public health researcher Lawrence Brown, highlights spatial racism—the use of land and geography as weapons of oppression. Brown explores many instances, including for example, the rise of Euclidian zoning as it coincides with the Great Migration,  and argues as to how it was used as a tool used by white residents to keep black newcomers out. The book’s title is after a term Brown coined for Baltimore’s segregated racial geography.

COLORADO—Taller Buildings Are Bringing Affordable Housing to Denver’s RiNo District — But Not Enough, Advocates and City Officials Say
Joe Rubino, The Denver Post, June 1, 2021
In 2016, the Denver City Council passed a height bonus in certain transit areas that allowed developers to exceed zoning limitations with the inclusion of affordable housing. However, the formula used, based on extra square footage, has only produced 96 affordable units (planned or constructed), to date. Developers interviewed for the article suggested a change to unit count rather than current formula, which could boost the number of new affordable units in a city where they are sorely needed.

NEW YORK—Developers Planning to Put Up 3 Apartment Buildings on Blighted Lot Near Train Station
John Asbury, Newsday, June 1, 2021
Developer Heatherwood Luxury Rentals hopes to redevelop two vacant lots near the West Hempstead Long Island Rail Road Station (LIRR) into three apartment buildings. The developer is petitioning the Town of Hampstead to rezone the parcels from business to residential use to allow the construction of 428 apartment units. Heatherwood also argued that the development would help to increase ridership on the West Hempstead LIRR branch, which Town Supervisor Don Clavin says he worries could be cut.

GEORGIA—Previously Owned MARTA Land to be Used to Develop Affordable Housing for Seniors
Terrance Kelly, CBS46, May 31, 2021
The Atlanta transit agency MARTA recently sold two parcels of land in the City of Decatur, near Avondale Station, for the purpose of constructing 80 units of affordable and mixed-income housing for seniors. The development is a partnership between real estate company Columbia Residential and the Decatur Housing Authority. In the metropolitan Atlanta region, MARTA has contributed to 1,500 affordable housing units either in the planning process or completed.

U.S. Department of Transportation Issues New Guidance for Transit-Oriented Development Projects Seeking Loans Through the Build America Bureau
United States Department of Transportation, May 21, 2021
THE USDOT recently announced updated guidelines for two Transit-Oriented Development funding programs, the Railroad Rehabilitation & Improvement Financing (RRIF) Program, and the Transportation Infrastructure and Finance Innovation Act (TIFIA). The RRIF Program provides loans to projects that enhance economic development with a passenger rail connection, and TIFIA gives credit assistance for transportation projects, including TOD. Regarding RRIF funding, a private developer and transit agency involved in joint development involving could apply for financing for an affordable housing project as part of a rail station redevelopment. In the case of TIFIA, TOD loans could be used to pay for “horizontal” improvements, such as new streets, sidewalks, or transit station improvements within a private developer’s transit-oriented development.

Enough with Copenhagen! It is Time for U.S. Cities to Learn From Models Closer to Home
Juan Miró, ArchDaily, June 2, 2021
Architect Juan Miró writes that American planners should look to the lineage of planning throughout North and South Americas, including indigenous civilizations, for insight and inspiration to solve common problems. Miró discusses how urbanist bias for European cities like Copenhagen provide poor models for U.S. cities, arguing how European and American growth trajectories have been very different, and that looking to Europe’s cities for inspiration has colonial connotations.

CHINA—China’s Concrete Jungles Make Room for Green Space
Keith Bradsher, The New York Times, June 1, 2021
China’s cities have experienced a transformation in the last two decades, growing rapidly, but also expanding green space fivefold during the period. The nation’s current five-year plan calls for cities to build more parks, a change from past plans that made little mention of them. Shanghai intends to add 600 parks to its metropolitan region over the next five years. The country as a whole now rivals New York City, long a leader in parks, in terms of greenspace per person.

GERMANY—Yes, Other Countries Do Housing Better, Case 2: Germany
Alan Durning, May 27, 2021, Sightline Institute
The German housing market has remained relatively static over the last 45 years, rivaled only by Japan’s stable home prices. One reason is that, in the last decade, Germany permitted almost as many new homes as it added in new residents. One reason for this parity is the allocation of state funds by population, which incentivizes localities to authorize housing construction.

July 31, 2008 Steph_Admin Comments Off on New Jersey’s Urban Employment Centers Get a Boost