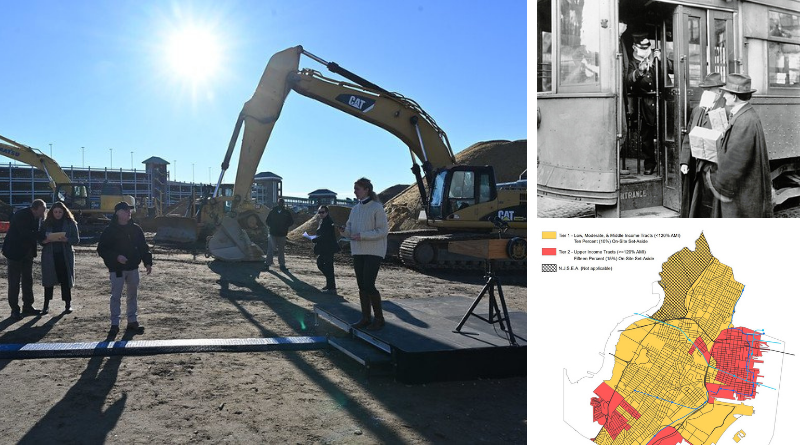 America’s Housing Crisis Is a Disaster. Let’s Treat It Like One.
Gregory Heller, Governing, November 24, 2021

Funding from the CARES Act and American Rescue Plan framed federal investments in housing as disaster recovery, part of a push to more quickly and effectively channel funds to those in need. Heller, former Executive Director of the Philadelphia Redevelopment Authority, argues that this approach could be emulated in response to the existing affordable housing crisis. In particular, the $150 billion in aid earmarked for affordable housing should be conceptualized and distributed according to this model—using the response infrastructure i developed by state and local governments during the pandemic to combat the prolonged housing crisis.

What Does History Teach Us About Pandemics and Transit Ridership?
Jake Blumgart, Governing, November 24, 2021
A new paper presented at the Australasian Transport Research Forum examines the effects of past pandemics on transit ridership, and contrasts them with the impact of COVID-19. Stay-at-home orders were not possible in 1918. “There wasn’t much ridership effect 100 years ago because, effectively, activity was continuing,” said Graham Curie, professor of transportation engineering at Monash University. Because of the lack of an alternative form of transport, transit ridership quickly bounced back after a slight dip, despite the pandemic’s persistence over the next two years.

FLEMINGTON—Borough Planning Board Considers Whether Liberty Village Redevelopment Plan Passed Up an Attractive Transit-Oriented Development Opportunity
TAP Into Flemington / Raritan, December 2, 2021
As Flemington considers redevelopment plans for its Liberty Village area, planning board members asked whether transit, and transit-oriented development was being adequately considered. Under the current proposal, a nearby park-and-ride served by private operator Trans Bridge, would be redeveloped. But several members of the planning board requested that future transit use, from both private operators and NJ TRANSIT, be adequately considered in the plan.

Hudson River Rail Tunnel Gets Green Light From the Feds to Start Building It
Larry Higgs, NJ.com, December 1, 2021
The U.S. Army Corps of Engineers issued a permit allowing construction of a new tunnel and tracks underneath the Hudson River, part of the Gateway Program to rehabilitate and expand the vital rail connection between New Jersey and New York. With the permit approval, construction is expected to start in summer 2023, with federal financing for the project expected by late 2022. The $12.3 billion project includes $2.2 billion to upgrade the existing tunnels after Hurricane Sandy damage, and $10.1 billion for new, adjacent tunnels.

JERSEY CITY—Jersey City Introduces New Inclusionary Housing Ordinance
Chris Fry, Jersey Digs, November 30, 2021
The Jersey City Council approved an inclusionary zoning ordinance intended to increase the amount of affordable housing in the municipality. The requirements are intended for development projects of 15 units or more, where developers request a variance or redevelopment plan amendment to construct more than four additional units, or an extra 5,000 sq. ft. of residential space. The ordinance specifies two tiers: Tier 1 pertains to rapidly developing neighborhoods, such as Journal Square, and requires that 10 percent of on-site units be affordable, and Tier 2, for higher income areas such as downtown, where at least 15 percent of on-site units must be affordable. Jersey City’s previous inclusionary housing ordinance was struck down in 2020, after a challenge by the Fair Share Housing Center.

PLAINFIELD—Another 5-Story Apartment Building Proposed in Plainfield
Mike Deak, My Central Jersey, November 30, 2021
The Plainfield Planning Board will hear a proposal for a TOD opposite the Netherwood Station. The proposal is for a five-story, 42-unit mixed-use structure, with 48 parking spaces. The Board will also hear a proposal for a 17-unit, mixed-use structure near the downtown Plainfield Station. Some attribute the growing development interest to progress on the Gateway Program, which will increase rail capacity, allowing for a peak one-seat ride on the Raritan Valley Line to New York Penn Station.

NEWARK—Developer to Pitch Plan for Development on Newark’s Broadway
Jared Kofsky, Jersey Digs, November 29, 2021
Developer 40 Broadway Ave, LLC has applied to the Newark Zoning Board of Adjustment to construct a mixed-use building with 18 apartment units, ground-floor retail, and a gym. The project would be sited within a block of a NJ TRANSIT bus stop offering travel on six bus routes, and a seven-minute walk to Newark Broad Street Station, with service to Hoboken and New York City.

CALIFORNIA—A $64 Million Vote for Social Housing Passes in San Francisco
Roshan Abraham, Next City, December 2, 2021
The San Francisco Board of Supervisors approved a $64 million set-aside for the City’s “Small Sites Housing Acquisition Program.” The program supports the purchase of homes for tenants at risk of eviction, converting the units to permanent affordable housing. Funding for the program comes from a wealth-transfer tax, passed last year, on the sale of properties worth more than $10 million. The allocation must still be approved by San Francisco Mayor London Breed, who has expressed intentions to modify the program.

CALIFORNIA—Some California Cities Try to Blunt New Duplex Law with Restrictions on New Developments
Liam Dillon, Los Angeles Times, November 30, 2021
When California’s Senate Bill 9 takes effect on January 1, 2022, it will require the state’s municipalities to allow duplexes, and in some cases, fourplexes, in most neighborhoods zoned for single-family homes. In a state where two-thirds of all housing is single-family, some localities are looking at ways to limit the potential change that might result in their neighborhoods, for example, by constraining the height and footprint of new multifamily development, requiring parking, and setting affordability requirements for new multi-unit structures. Some opponents are going so far as to propose a state constitutional amendment to limit the state’s ability to override local zoning. California is only the second state to eliminate exclusive single-family zoning, following Oregon which did so in 2019.

5 of the Largest Mixed-Use Projects in the Works Across the US
Mary Salmonsen, Construction Dive, November 30, 2021
Large-scale mixed-use projects are in progress across the country. Transit-supportive projects include the $2 billion Landmark/Inova redevelopment project in Alexandria, Virginia, with 4 million sq. ft. of new development, as well as a new transit hub. In Boston, the $1 billion Enterprise Research Campus will expand Harvard University into the Allston neighborhood, where the first phase of a 90,000 sq. ft. mixed-use development will be complemented by a new nearby commuter rail station and bus transfer facility. Finally, the second phase of the Ronkonkoma Hub in Brookhaven, New York recently broke ground. Developers will construct an additional 388 housing units, 73,000 sq. ft. of commercial space, and 15,500 sq. ft. of retail adjacent to the Long Island Rail Road Ronkonkoma Station.

WASHINGTON—Terms OK’d for $500M-Plus Transit-Oriented Bellevue Development
John Stearns, 425 Business, November 18, 2021
Seattle-area public transportation agency Sound Transit approved an agreement with developers to construct TOD at a site opposite its future Spring District/120th Link light rail station. Over the seven-acre parcel, 500 units of housing will be built, with 280 reserved for residents making between 30 and 80 percent of Area Median Income (AMI). Additionally, the TOD will include office space, ground-floor retail, and public greenspace. As part of the arrangement, Sound Transit expects to receive $1.36 million in ground rent, and 1 percent of the gross sales proceeds from sales of office or market-rate housing in the building.

RUSSIA—KCAP Architects Unveils First 15-Minute City in Moscow
Dima Stouhi, ArchDaily, December 1, 2021
The ZIL-South masterplan is a brownfield redevelopment district which, when completed, will comprise varied, dense residential housing, office space, and retail amenities within four distinct zones. Promoting “15-minute City” principles, the design of the district aims to connect residents to amenities and public spaces within a reasonable walking distance. A metro line cuts through the site, and business uses will be concentrated adjacent to the line.

UNITED KINGDOM—Why the U.K.’s High-Speed Rail Plan Was Cut in Half
Feargus O’Sullivan, Bloomberg CityLab, November 24, 2021
A 2019 proposal to expand passenger rail in England’s less prosperous north called for an underground station in Manchester, served by future high-speed rail, known as HS2. Now, a revised plan has drastically reduced the infrastructure investment, with an elevated station and a connection between Manchester and Leeds reduced to a minor upgrade. The decision calls into question the government’s goals of investing in the post-industrial north, as well as reaching certain emissions reduction thresholds.

Harrison Follows Its Vision Towards Redevelopment

June 1, 2015 Stephanie DiPetrillo Comments Off on Harrison Follows Its Vision Towards Redevelopment