Cities split apart by highways received a major boon to relink their neighborhoods through the federal Reconnecting Communities Pilot grant program. Equity is a driving force for these reconnections, since communities of color are historically the most impacted by the impositions of inner-city highways. Cities such as Dallas, Boston, and Minneapolis have already made strides in addressing conditions in communities cut up by highways, and present positive examples of what grantees of the federal pilot may be able to accomplish.

NEW YORK—No Plans for New Mask Mandate on Transit, MTA Chief Says
Ben Brachfeld, AmNY, October 26, 2022
Despite increasing COVID-19 hospitalizations and infection rates in New York City, the Metropolitan Transit Authority (MTA) expressed a lack of enthusiasm for reintroducing a mask mandate on the city’s transit system. Nominally deferring to the decision-making of health authorities, the MTA says compliance for mask-wearing had declined even before the mandate was officially repealed. Advocates for individuals with disabilities and other COVID risk factors denounce this perspective, and say that more involved measures may be necessary to meet current increasing health hazards.

EAST BRUNSWICK—Big Changes for Route 18 in East Brunswick
Maureen Berzok, TapInto, October 25, 2022
Looking to revitalize abandoned properties along Route 18 South, the East Brunswick Redevelopment Agency signed off on a 45-acre Redevelopment Zone that will center on a new bus terminal. Officials stated that they partnered with River Development Equities to manage the zone because the firm produced “the most innovative plan, a coherent plan” that would facilitate transit-oriented development. The project is currently in the property acquisition phase, as River Development negotiates with current business owners on the site. 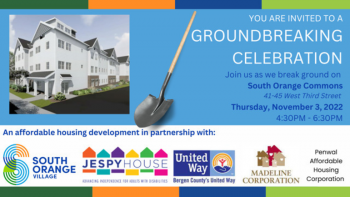 SOUTH ORANGE—RESCHEDULED: Groundbreaking Ceremony to Celebrate Affordable Housing Project ‘SOUTH ORANGE COMMONS’ – November 3, 2022
South Orange Village, TapInto, October 25, 2022
South Orange’s first 100 percent affordable housing project will break ground next week and is set to provide 26 housing units. In partnership with the JESPY House, an advocacy group that assists 260 adults with Intellectual and Developmental Disabilities, 16 of the units will be reserved for adults who require such services. The project is expected to be completed in 12-18 months and will feature amenities such as laundry rooms, a community room, and a roof terrace.

Using Tech to Make Transit Accessible for Those Without Smartphones
Henry Pan, Next City, October 25, 2022
Though smartphone technology has improved the transit experience for many riders, there is an increasing need to keep transit accessible for those without smartphones. Appropriate signage and payment options are necessary to have an equitable transit system for the 15 percent of Americans who do not own a smart phone. These accessibility efforts benefit smartphone users as well by giving them more navigation options, such as a backup if their phone batteries die.

NEW YORK—M.T.A. Will Reopen Some Subway Bathrooms for First Time Since Pandemic
Ana Ley, New York Times, October 24, 2022
Having shut down its 69 bathrooms in 2020, the Metropolitan Transit Authority (MTA) intends to reopen eight to the public. Inadequate access to public bathrooms near public transit presents both physical barriers to individuals with certain disabilities and problematic public health dimensions. Though the MTA expressed hesitation, saying that bathrooms are not their priority, advocates and officials are hopeful the reopening of these utilities signifies more to come in providing such an essential service.

PENNSYLVANIA—Multiple Apartment Projects in Ambler Are on the Horizon
Kevin Tierney, Around Ambler, October 26, 2022
The Ambler Planning Commission unanimously recommended the preliminary plan for a 92-unit apartment building at 9 North Maple Street, contingent on updates to the Borough’s Transit-Oriented District. The current ordinance defines the TOD district as having frontage along the railroad tracks. The proposed revisions to the ordinance define the district as land within 675 feet of the train station. This project, which would still need to be approved by the Planning Commission, would follow the completion of The Crossings at Ambler Station, which included 114 units, of which 61 units have been leased.

COLORADO—CDOT Leads the Way in Not Building Highways
Seairra Sheppard, Strong Towns, October 25, 2022
The Colorado Department of Transportation (CDOT) decided against a Denver highway expansion in light of an avalanche of expert and activist opinion cautioning against the project. Concerns about the highway’s potential maintenance issues, and significant state government investment in low-carbon transportation infrastructure influenced the decision. Transit and pedestrian advocates have expressed the need to prevent the funding from merely going to a different highway project elsewhere, but cite the decision of CDOT as a sign of TOD progress in the state.

MASSACHUSETTS—Board Approves Transit-Oriented Apartment Building with Un-Transit-Oriented Number of Parking Spaces Across Street from Hyde Park Train Station
Adam Gaffin, Universal Hub, October 25, 2022
The Zoning Board of Appeal approved plans for redevelopment in the Hyde Park neighborhood of South Boston. The plans for the River Street Residences call for a four-story structure with space for a ground floor coffee shop and 30 parking spaces, representing a one-to-one ratio of spaces to units, to be provided using a mechanical stacker system. The project is located directly across from the Hyde Park commuter rail station. The developer had originally proposed fewer spaces and more units, but revised plans following criticisms from residents and elected officials. The building will include five affordable apartments for those making no more than 70 percent of Boston area median income.

TEXAS—Achieving Vision Zero in Houston Isn’t Going to Happen One Intersection at a Time
Allyn West, Texas Observer, October 19, 2022
With more than 650 deaths due to automobile crashes in Houston last year, stakeholders will need to make more serious and systemic pedestrian safety commitments to reach their touted Vision Zero goals. Rather than approaching crashes as accidents or hazardous intersections as isolated cases, city officials will need to rein in Houston’s Sunbelt sprawl, stroads—thoroughfares that mixes place-based street functions with high-speed connective roadways, and SUVs head on. The wider context of the city’s built environment needs to be amended with streets that prioritize safety over automobile through-put.

CANADA—Côte-St-Luc Plots a Shift to ’15-Minute City’ Featuring Transit, New Housing
Linda Gyulai, Montreal Gazette, October 24, 2022
Côte-St-Luc, a community near Montréal, is updating its masterplan to include “15-minute city” principles of walkability, transit access, and mixed land use. The plan would allow for transit-oriented redevelopments near transit stations and incorporate a more comprehensive bike network for cyclists. The renovation of shopping malls in Côte-St-Luc’s is intended to promote commercial activity and—through a multiphase effort—convert existing parking lots into new housing, businesses, and offices.