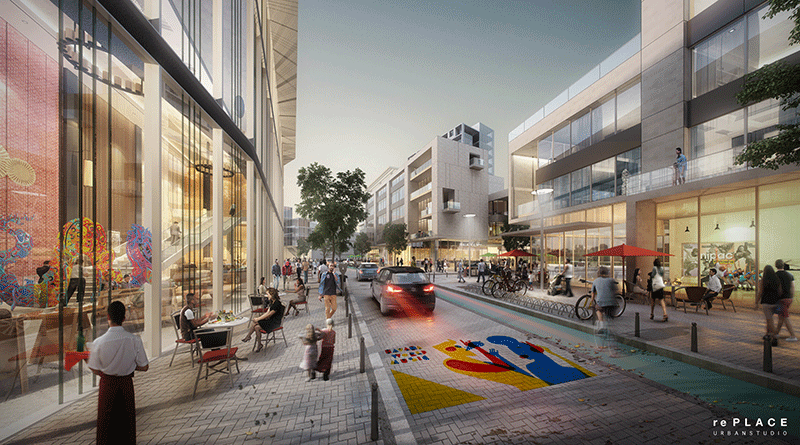 Jersey City Launching City-Run Shuttle Service Later This Year
Chris Fry, Jersey Digs, September 20, 2019
Jersey City Mayor Steve Fulop recently announced a city partnership with the transportation company Via to provide a new shuttle system to locations throughout the city in an effort to create better connectivity for the neighborhoods. The shuttle routes will be established based upon passenger demand and will include a number of PATH, ferry, and light rail stations available in key service areas. The city anticipates the shuttle service will begin operations within three months and offer residents a transportation alternative Monday through Friday from 6 am to 10 pm.

Hoboken Yard Redevelopment Plan is Back – A Lot Smaller Than Originally Planned
Teri West, The Jersey Journal, September 20, 2019
The City of Hoboken has made progress in moving forward with three long-anticipated development projects. Hoboken’s City Council re-introduced plans to redevelop an area along Observer Highway neighboring the Hoboken Rail Yard, while the Planning Board re-reviewed plans for a hotel on Newark and River Streets. The third project to expand the Southwest Resiliency Park was pushed forward with an initiative by the city to use eminent domain to obtain a lot necessary for the expansion. First Ward Councilman Mike DeFusco noted the importance of having the project developer fund community improvements, including transportation.

NJ Transit Considering River Line Corridor, Stations Redevelopment
Lisa Broadt, Burlington County Times, September 21, 2019
NJ TRANSIT has issued a Request for Expressions of Interest (REOI) asking experienced developers to gauge public and private interest, recommend land uses, and propose conceptual development scenarios along the RiverLine route that runs between Trenton and Camden. The agency’s request cites 13 key RiverLine stations, including five in Burlington County. The request is part of an effort to redevelop the 37-mile-long corridor and will be discussed at a forum in October.

NJPAC Envisions Major Six-Acre Development in Downtown Newark
Jared Kofsky, Jersey Digs, September 23, 2019
The New Jersey Performing Arts Center (NJPAC) unveiled plans that would extend Mulberry Street north to Rector Street in Downtown Newark. The new block will serve as the focus of a 6.1-acre development initiative to create a public realm where the arts and artists can come together with people on the street. The mixed-use development would comprise performing art space, galleries, retail, hotel, residential apartments and other uses and be located near the NJPAC/Center Street Station and adjacent to the track of the Newark Light Rail line.

Little Silver: Sidewalk Project Begins
Red Bank Green, September 25, 2019
The Borough of Little Silver has embarked on its sidewalk replacement and installation program beginning with the replacement of a 1.5-mile sidewalk on the western side of Branch Avenue from Madison Avenue to Sycamore Avenue. Detours at the Little Silver-Red Bank border on Branch Avenue mark the beginning of the first phase of a $2.8 million sidewalk repair and installation project. This is part of an effort by the mayor and council aimed at improving the walkability and safety of Little Silver over the next year and a half. According to Borough Administrator and Clerk Kim Jungfer, the construction project will be scheduled in phases to minimize adverse traffic impacts.

Plainfield: South Avenue Continues Redevelopment Boom with Transit-Oriented Projects
Bob Makin, Bridgewater Courier News, September 27, 2019
Plainfield’s aim towards transit-oriented redevelopment has resulted in three projects proximate to the Netherwood Station, one of the city’s two stations. Newark-based Paramount Assets broke ground on Netherwood FLATS, a four-story, 70-unit building with 4,000 square feet of ground floor retail at 829 South Avenue. On October 2, the Plainfield Zoning Board will hear an application for a two-building, 42-unit multiuse project at 1008-1014 South Avenue. On October 3, JMF Properties Group will open the first phase of Quinn at Sleepy Hollow, offering 100 of a total of 220 residential units.

L.A. Metro Report Details Challenges Faced by Women Riding System
Steve Hymon, Metro Magazine, September 20, 2019
The Los Angeles Metro recently released a first-of-its-kind study by a transit agency, Understanding How Women Travel. The study identifies a broad array of challenges that women face when using the Metro system, covering topics such as travel behavior, traveling with kids, fares, and safety. The study confirms that women have different mobility needs, travel patterns, commute demands and safety concerns when using Metro. The LA Metro will use the study’s findings in the creation of a Gender Action Plan to improve women’s travel experiences on their system.

Open Forum: Electric Cars Won’t Save Us, But a New Transportation Grid Might
Beth Osborne, San Francisco Chronicle, September 24, 2019
The Director of Transportation for America discusses how between 1990 and 2016 the overall fuel efficiency of the vehicle fleet rose by 35 percent, but that during this period national emissions increased by about 21 percent due to a 50 percent increase in driving. Transportation remains the single largest source of climate pollution, with 82 percent of emissions produced by cars and trucks. The California Air Resources Board has concluded that the state cannot achieve its climate targets solely by switching to an electric vehicle fleet, but must reduce driving overall to reach this goal. This will require rethinking and restructuring the existing transportation system to discourage driving.

Old Paris Railway Site Will Transform into a Carbon-Neutral “Ecosystem Neighborhood”
Lucy Wang, In Habitat, September 23, 2019
Danish landscape architecture practice SLA and French architecture firm Biecher Architectes have proposed a mixed-use masterplan for a sustainable urban development at the City of Paris’s old railway site in the 18th arrondissement, Ordener-Poissonniers. The plan emphasizes bioclimatic design that preserves the site’s industrial heritage while simultaneously bringing new functionality to the underutilized area. The proposed 3.7-hectare “ecosystem neighborhood” will comprise residential units, office, retail and restaurant space, school buildings, a cinema complex, urban farming and an industrial design incubator for SLA, and is expected to be completed in 2024.

Metro Rail to Speed Up Life in Bangladeshi Capital
Md. Kamruzzaman, Anadolu Agency, September 25, 2019
Bangladesh is in the process of constructing the first elevated metro rail project in Dhaka City and approximately one-third of the project has been completed. Dhaka City is the world’s most densely populated capital and the metro rail project will ease transportation for more than 15 million citizens. Managing Director of the Mass Rapid Transit Project, M. A. N. Siddique, noted that they hope to complete the project’s six rail lines by 2030.

Gdańsk Airport to Start 120,000 SqM Mixed-Use Project
Rafal Ostrowski, Eurobuild, September 25, 2019
The Gdańsk Lech Wałęsa Airport in Poland plans to develop a 120,000 sqm complex located near terminal 2 into a mixed-use project for the Airport City. The project will span seven buildings comprising retail, restaurant and office space, and a hotel. Construction on the first building is slated to begin by the year’s end and completion for the project’s first stage is anticipated for the third quarter of 2021.