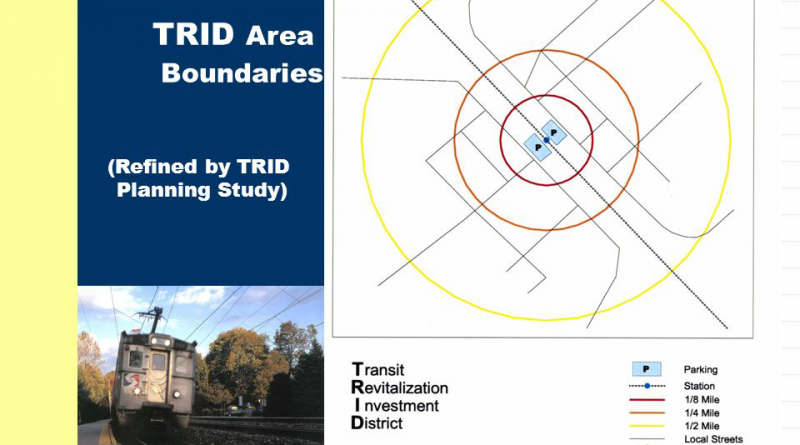 TOD projects sponsored by municipalities outside Philadelphia and Pittsburgh have begun benefiting from a Transit Revitalization Investment District (TRID) Act that was enacted by Pennsylvania in February 2005 to spur TOD across the state. Similar to the Transit Village Initiative in New Jersey, Pennsylvania’s TRID establishes state-level budgetary and technical resources to help communities develop vacant, underutilized or otherwise redevelopable land located within a half-mile radius of a transit station. Initially, municipalities team with the transit agency to undertake a TRID Planning Study, establishing the boundaries and rationale for the special district. A TRID management authority, appointed by municipal officials, then oversees the implementation plan and ultimately solicits developers for proposals in the district.

The Borough of Marcus Hook, located southwest of Philadelphia along SEPTA’s Northeast Corridor rail R2 line, was one of the first municipalities to receive TRID funds. In coordination with SEPTA, the borough will use the $60,000 grant to build upon an initial TOD study completed in 2003. The new funding will support a host of activities to formally establish the Borough’s TRID, such as determining the distribution of anticipated tax revenues, formulating a financial plan, preparing an agreement with SEPTA and forming the TRID management authority. Marcus Hook is already evaluating a developer’s proposal to build a mixed-use facility at a vacant site located less than 100 yards from the SEPTA rail station. The proposal includes at least 120 residential units with a mix of rental and for-sale units.

For more information about TRID, see the 10,000 Friends of Pennsylvania website.