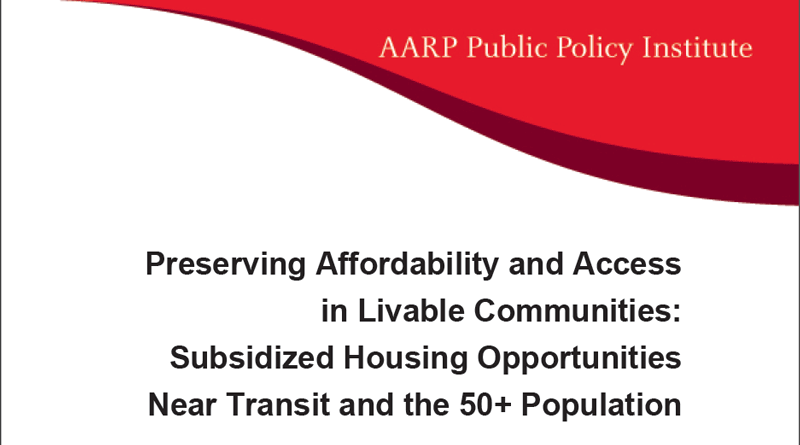 Preserving Affordability and Access in Livable Communities:
Subsidized Housing Opportunities near Transit and the 50+ Population (2009)
By the AARP, with Reconnecting America and the National Housing Trust

TOD planners should take note of a study released last fall by the AARP, with Reconnecting America and the National Housing Trust. The report surveyed federally-subsidized affordable housing in 20 cities, including New York City and Philadelphia, and found that a significant number of Section 8 and Section 202 units are presently located in close proximity to transit, but raised concern about the continued affordability of many of these units.

Specifically, of the 400,000 units identified, more than 250,000 were within half a mile of rail or bus rapid transit (BRT), of which nearly 200,000 were within a quarter mile. Unlike traditional public housing, which tends to be located in its own dedicated buildings, Section 8 and Section 202 apartments are generally located in private buildings, with landlords who have entered into contracts to participate in the program for a period of time. With such units heavily concentrated in transit-oriented locations, the growing popularity of such neighborhoods could prompt their landlords to opt-out en masse, as the present contracts expire. About 70 percent of current agreements will expire by 2014.

If such a trend develops, the tenants of these units—especially seniors—will be hit hard by displacement from the transit-proximity of their current homes. To head off a crisis, the report outlines a number of strategies that officials could pursue to preserve the stock of affordable units in TOD locations. Some of these include ensuring that federal subsidy rates reflect increases in market rents, developing more housing units in TOD locations, and developing better transit options in neighborhoods with lower market rents.