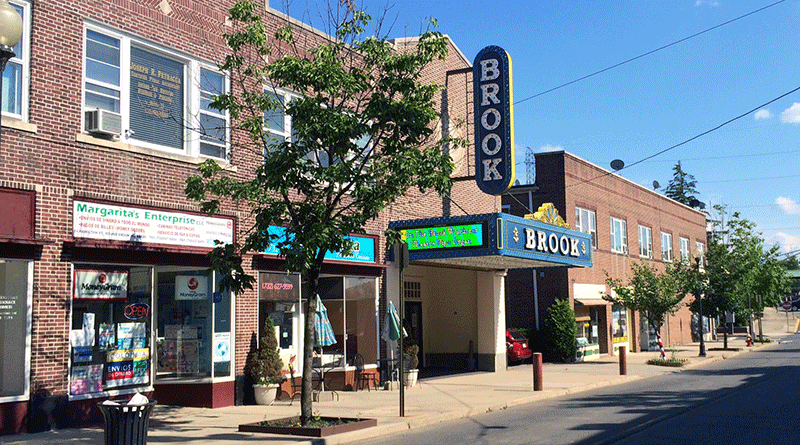 Recent and anticipated changes are helping Bound Brook meet its TOD goals. Originally designated a Transit Village in 2003 for its robust TOD vision, the Borough has faced frequent flooding events as well as the recent economic downturn that have stymied progress. Today, work to fortify the Borough against flooding is coming to an end. This work coupled with the introduction of a one-seat ride to New York Penn Station and the adoption of the Bound Brook Downtown Urban Design Plan is helping the Borough move forward. A new mixed-use project, Meridia Main Street, is nearing completion and will add commercial opportunities as well as bring new residents to Bound Brook. New development, population growth, improved transit service, and planning are joining forces to create a vibrant TOD community.

The small Somerset County community – some 10,500 residents call Bound Brook home – has seen recent population growth in response to the rebuilding effort that has occurred since floods displaced a number of residents. The community suffered extensive damage from a number of storms, notably Hurricane Floyd in 1999, which spurred the Green Brook Flood Control Project. To address this threat, Bound Brook, in partnership with the U.S. Army Corps of Engineers, the New Jersey Department of Environmental Protection, and the Green Brook Flood Control Commission, has recently completed projects to fortify the town against future storm events. New levees, floodwalls, and a pumping station now provide protection along the banks of the Raritan River. Project officials anticipate that the project will receive FEMA certification later this year. In recent years, with the promise of flood protection, the development community has started to invest in Bound Brook.

Recent improvements in transit service may help to spur redevelopment in the Borough. NJ TRANSIT operates 25 trains from Bound Brook to Newark Penn Station each day; the trip takes about 48 minutes. Until recently, passengers boarding at Bound Brook would need to change trains at Newark to complete an 80-minute trip to New York. However, with the purchase of 36 dual-use locomotives that can be powered by diesel or electric, NJ TRANSIT now provides a one-seat ride to New York Penn Station for Raritan Valley Line passengers. This direct service is currently offered five times each weekday during off-peak hours and cuts average travel time by six minutes. NJ TRANSIT plans to add one-seat ride trains to the off-peak evening schedule in fall 2014. Connecting from Bound Brook Station, Somerset County Transportation Services operates three local bus routes – the Community Access Transit (CAT), the Davidson Avenue Shuttle (DASH), and the SCOOT, which take riders to the county seat in Somerville and area educational, employment and shopping centers such as Raritan Valley Community College, MetLife, and Bridgewater Commons Mall.

Anticipating completion of flood prevention measures, Bound Brook began planning for change in its downtown. The Borough worked with the Regional Plan Association to develop its Downtown Urban Design Plan, which was adopted December 2010. Recently the Borough began to implement the recommended changes to its zoning ordinance in order to improve development opportunities. Changes to the Business/Residential zoning district, for example, will increase building height requirements from a maximum of two-stories to a minimum of three-stories and a maximum of five-stories. The Planning Commission has given this updated ordinance a favorable review and the Borough Council will review the measure at their August 12, 2014 meeting. “Once approved it will pave the way for more development on Main Street by providing a clear vision of what the Borough wants to see there to support the Transit Village,” said Planning Board member Kerry Miller.

Additional zoning ordinances in the downtown redevelopment area will be updated soon after; it is anticipated that all updates will be completed by the end of the year. The Borough’s goal is to make the zoning ordinances for the downtown redevelopment area more transparent and easier to interpret, an essential step needed to streamline the development process.  Continued interest by the development community and a streamlined zoning ordinance can help to ensure that new projects are successful and have community support. This potential development can enhance current trends in Bound Brook and help create an even greater transit-friendly destination on the Raritan Valley line.

With a growing population, transit improvements, flood control system completion, and the implementation of the Downtown Urban Design Plan, the economic development community is capitalizing on all the work accomplished in Bound Brook. One of the newest projects, Meridia Main Street, is a 240-unit 1- and 2-bedroom apartment building located at the circle where East Main Street meets Bolmer Boulevard. The $30 million project has a prime location less than one-quarter mile from the Bound Brook train station. Meridia Main Street is nearing completion and occupancy is anticipated in fall 2014.  The opening of this project follows completion of similar developments, such as Canal Crossing in South Bound Brook.

Bound Brook has also made investments in new facilities. On June 28, 2014, the Borough held the grand opening celebration of a new recreation building. Located at the corner of Thompson Avenue and Grove Street in Codrington Park, the new facility houses a gym, locker rooms, and meeting rooms and will be the site of programs geared toward all ages, including children and senior citizens. These upgrades, in addition to those completed at Billian Legion Park, just across from Meridia Main Street, afford great recreational opportunities to current and potential residents.

While bricks and mortar development has been a key driver of new growth in Bound Brook, programmatic and arts/cultural offerings are also bolstering community-building efforts. A farmer’s market is held at the train station parking lot in downtown every Saturday from 9am to 2pm. The market began on June 21 and runs through September 20, 2014. The Hamilton Street Gallery and the Brook Arts Center are also located downtown on Hamilton Street, just across from the station, and serve as cultural resources for the community and Somerset County.
New development and a growing population complemented by community building efforts and cultural resources have helped Bound Brook come closer to its goal of being a true transit village. There is great potential for success, and Bound Brook is well on its way.

May 17, 2006 Steph_Admin Comments Off on A "New Town" TOD in Connecticut: The Gilbert & Bennett Wire Mill Redevelopment Project