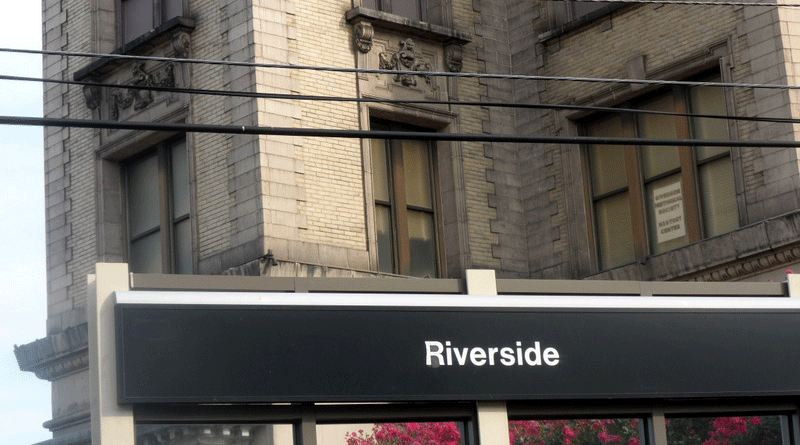 Located a mere 22 minutes from Camden via the RiverLINE, Riverside plans to expand its TOD efforts as New Jersey’s economic fortunes improve. Situated 12 miles north of Camden, the township, home to only 7,700 residents, was designated a Transit Village in 2001 in part for its plans to redevelop a 32-acre former industrial area known as the “Golden Triangle.” On the site is Riverside’s signature historic building, the Keystone Watchcase Tower directly across from the township’s RiverLINE light rail station, which opened in March 2004. Passengers traveling to Camden can transfer at the Walter Rand Transportation Center and continue to Philadelphia via PATCO. Travel to Trenton takes about 40 minutes, where riders can transfer to the Northeast Corridor and travel on to Newark and New York. About 440 passengers board the RiverLINE at the Riverside Station each day, making it the line’s third busiest non-terminal station.

Recent projects have resurrected the community’s transit oriented development objectives. In mid-March, The Teicher Organization unveiled plans to build The Villages at Riverside, a 24 home subdivision on an empty parcel bounded by Clay, Kossuth, and Taylor Streets—the first subdivision proposed for Riverside in over a decade. The site is a mere two blocks from the RiverLINE station. The two-family attached homes will feature a three-bedroom owner unit and a two-bedroom rental unit, each with separate entrances and off-street parking. The homes estimated to sell at approximately $295,900, are expected to attract commuters and professionals to the area. Development is set to begin this fall.

The Teicher Organization has also submitted an application for redevelopment of the old Zurbrugg Hospital site for retail and residential redevelopment. The hospital, which was located in the Golden Triangle, was torn down in 2010. Clean up of the site was completed this spring.

One other major project is also underway in Riverside’s Golden Triangle. In 2005, J.S. Hovnanian & Sons purchased two old knitting mills with plans for redevelopment into a residential building, to be called “The Mill at Riverside.” According to the company, the proximity to mass transit was a major factor in its decision to develop in Riverside. The project, which had been delayed for some time due to the economic climate, is once again a priority, according to the developer. Discussions are currently underway about what form the project will take.

Riverside officials and residents hope that investment in the RiverLINE will continue to revive downtown commercial activity and help to sustain the community’s main street character. Today, in Riverside’s Central Business District, upscale restaurants are beginning to return, and redevelopment officials are working to attract a variety of retailers and service providers, transforming the once abandoned downtown area into quality public space. The River Line has proved to be a marketable local asset and has helped to position Riverside as an affordable and livable community within easy reach of the Philadelphia and Camden areas.