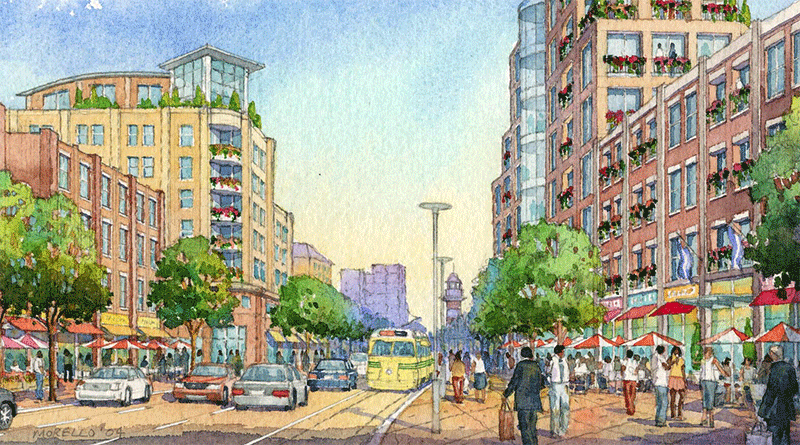 Bayonne’s Local Redevelopment Authority has given the go-ahead to the redevelopment of the Military Ocean Terminal Bayonne (MOTBY), a 430-acre, two-mile long peninsula jutting into New York Harbor, and now to be known as The Peninsula at Bayonne Harbor. In an October 5 vote, the Authority’s Board of Commissioners approved the first four developer agreements for the site, which has been delineated into six distinct districts with specific land uses and densities:

The Board authorized its executive director, Nancy Kist, to sign agreements with:

The Board also decided to authorize a letter of agreement setting parameters for the transfer of Harbor Station South. This area will accommodate the main commercial area of the Peninsula and will be connected to the Hudson Bergen Light Rail 34th Street station via a new pedestrian walkway over Route 440. A new road, Center Street, will divide Harbor Station South and serve as a retail corridor leading to the “Town Square” public space and the waterfront beyond.

Tying together all of these districts and future developments are excellent transportation options: The Hudson Bergen Light Rail 45th and 34th Street stations anchor the west entrances to the project; a proposed ferry terminal is slated for The Landing district; and, existing access is available to major highway connectors—Route 440, the New Jersey Turnpike and the Bayonne Bridge to Staten Island. In addition, there is streetcar service proposed along the length of the peninsula whenever population and visitor levels can support it. Until then, developers will be required to fund a shuttle service that takes residents to and from the 34th Street light rail station (or pedestrian overpass when built) and any ferry landing that becomes operational.

The plan for The Peninsula at Bayonne Harbor has already gathered numerous awards: