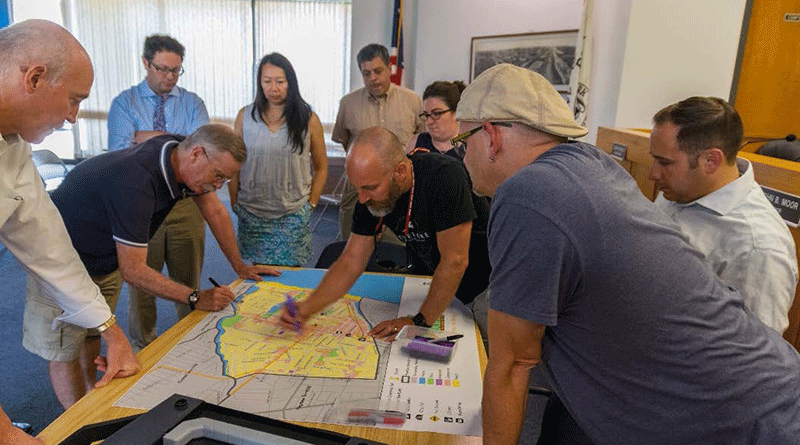 In 2013, Asbury Park committed to rezoning the area within a half-mile of its train station in order to accommodate increased density and housing opportunities. Located on the North Jersey Coast Line, Asbury Park Station serves over 500 patrons each weekday. The city would like the Transit Village to develop into an integrated, walkable, bikeable, safe, and dynamic place that extends east and west of the station. “The city would like to see Main Street enhance its retail and residential properties, which will hopefully be made possible with future grants and funding,” said City Planning and Redevelopment Director Michele Alonso.

Historically, Asbury Park served as an oceanfront resort destination for visitors from New York and Philadelphia who often arrived by rail. The city has hosted a vibrant music scene since the 1960s and continues to attract musicians and other artists and their audiences. Today, the city continues to be an active resort community with a growing year-round appeal. Having worked hard to transform Main Street, Cookman Avenue, and, to the west, Springwood Avenue, into lively places for expanded residential, retail, and entertainment opportunities, the city is hopeful its Transit Village designation will serve to support and advance economic revitalization of the downtown core, which surrounds the train station to the east and west.

Asbury Park is home to nearly 16,000 residents, many of whom have expressed interest in living in a more bicycle and pedestrian-friendly neighborhood. As a result, the city sought a number of grants to facilitate bicycle-pedestrian improvements. Some of these include:

Asbury Park is also actively seeking to improve its pedestrian and bicycling facilities in other ways. The city launched a bicycle share program in late August 2017 that features 30 bikes and 6 stations across the city. Two stations are located at the train station, one at Press Plaza downtown, one by Springwood Park on the west side, and two along the waterfront. Within four months of its launch, the program had over 630 members, and over 1,200 trips had been made. Two more stations and 10 more bicycles are planned. The bike share program has received funding support from iStar Financial (a major financial backer of Asbury Park waterfront redevelopments), Madison Marquette, The Asbury Hotel, Home Drugs on Main Street, and NJ Natural Gas (the bicycle share’s newest sponsor).

The bicycle share effort has led Asbury Park to consider expansion and pursue partnerships with the county and adjacent cities with the goal of implementing changes within a year that would allow visitors and residents to ride between cities. The current system uses bikes with attached locks that allow users to park them at a non-bicycle share rack. To date, the system has seen no thefts or major vandalism incidents.
“As the bike share continues to be used into the colder months, it is clear that not only visitors are using bikes to get to the beach,” said Michael Manzella, Asbury Park’s Transportation Manager. “Rather, residents are utilizing the bikes for errands and their normal daily activities.”

Asbury Park has Monmouth County’s largest population of residents who do not own cars. The bicycle share, therefore, supports ease of transport and quality of life. The system will need to secure additional sources of funding to expand its footprint, in order to be present in more residential neighborhoods.

Madison Marquette, one of the bicycle share sponsors, paid for 44 bicycle racks (unaffiliated with the bike share) along Ocean Avenue. The city paid for two new bicycle corrals on Lake and Cookman Avenues, installed 10 bicycle racks downtown, and implemented 50 “stop for pedestrians” signs at crosswalks without signals throughout the city. Making bicycles and racks available to the public is important in cultivating bike-friendly neighborhoods. It is unlikely, however, that the bicycle share will reach its full user potential until renovations on Main Street and other measures are complete. Safety is one of the biggest components in encouraging a bicycle-oriented community.

Planned Projects in the Transit Village

In June 2016, Asbury Park received a $500,000 Housing and Urban Development grant for a plan to help revitalize the Southwest community near the train station. The West Side Choice Neighborhood Plan is expected to be completed in 2018 and aims to achieve three important goals:

This plan will complement other developments already in planning phases throughout the neighborhood.

Most of the current projects in planning and construction phases are residential buildings. Architect Robert Feinstein designed two mixed-use buildings (201 and 301 on Memorial Drive) that will be the first two buildings in the county to achieve a gold standard LEED certification. Both buildings will have green rooftops to mitigate stormwater runoff, as well as a special paver system at ground level that allows stormwater absorption. Building 201 is planned as a six-story structure with 30 one-bedroom apartments and 10 two-bedroom apartments, while Building 301 will house 76 rental units (71 will either be one or two-bedroom units). Five of the units will be reserved for artists’ lofts that are suitable for joint living and work spaces. The northeast corner of the building will house an art gallery and café with outdoor seating. Construction on both buildings began in 2017.

Renaissance Village is currently under construction by the Michaels Development Company. The building has been partially funded by an $8 million grant from the state’s fund for restoration of multi-family housing. The Renaissance Village will offer 63 below-market rental units and is scheduled to be completed in 2018.

Another project slated for completion in 2018 is the Interfaith Neighbors’ Parkview on Springwood Avenue. Formerly Turf Club Residences, Parkview will be a mixed-income development comprised of 10 three-story ownership-investment properties, including a five-bedroom home offering young men in need of temporary housing a place to learn to live independently. The project architect, Shore Point Architects of Ocean Grove, also designed the Springwood Center, located across the street from the residences. The Springwood Center is home to the Asbury Park Senior Center, Interfaith’s Business Development Center, eight affordable apartments, the Ocean Family Success Center, satellite Asbury Park police offices, as well as the Kula Café.  The Kula Café, and its partner, the Kula Urban Farm, combine a farm-to-table restaurant with an urban farming initiative. The Café and Urban Farm provide on-site job training, short-term employment opportunities, and educational programs. The Kula Urban Farm harvests fresh produce used by the Kula Café and other members of Asbury Park’s burgeoning restaurant scenes as well as community members in need. Parkview is also located across from Springwood Avenue Park, which opened in the summer of 2016. The park hosts summer concerts—funded by the Asbury Park Music Foundation and Interfaith Neighbors, a nonprofit that addresses homelessness —that fill the avenue with musicians, residents, and music lovers from all of Asbury Park’s neighborhood as well as nearby towns. Interfaith Neighbors has previously proposed a 47,000 square foot JAMS Performing Arts Center on Springwood that would feature a 200-seat performance/lecture hall, gallery space, theater, lounge, and restaurant. Though the center is likely about two years away from beginning construction, its potential as a hub for the City’s vibrant arts and music scene is exciting for the Asbury Park community. This project could serve as an iconic attraction and economic catalyst to bring visitors to the west side of the train station and to the Springwood Avenue corridor.

As new development is completed in the Transit Village, the number of visitors and residents will continue to increase, and parking will be very important to serving the needs of the community while increasing economic activity. “One of Asbury Park’s biggest challenges is managing the city’s growth and popularity,” Alonso said. “More visitors and cars are coming each year, which means more parking is needed.” Parking has become increasingly scarce, which highlights the need for a bicycle share program now more than ever. The Asbury Park City Council approved the purchase of 12 new parking meters to be added to high demand areas in June 2017, in order to facilitate better parking turnover rates. Many of the meters will be installed in residential areas. Residents will receive special permits to accommodate their needs. The city is closely monitoring the use of these meters for crucial information on the parking demand in residential areas as redevelopment continues to unfold. Data on the use of these meters will be complemented by other data from the Asbury Park Parking app.

In 2012, developer iStar Financial reached an agreement with the city to build waterfront upscale townhouses in return for a 30-year PILOT (Payment In-Lieu of Taxes). Under this arrangement, waterfront residents pay a special assessment that funds infrastructure for the future development of over 2,000 residential units along the waterfront. iStar will receive over $58 million in bonds that must be paid off using the special assessments within the 30-year period. The waterfront development is estimated to add tens of millions of dollars to the city’s tax base and will bring 3,000 construction jobs to the area. City officials believe development of the waterfront—one of Asbury Park’s biggest assets—will encourage future investment in Asbury Park.

iStar Financial opened the Asbury Hotel and condos along the water in 2016. The hotel has 110 rooms and sits on the site of a previous Salvation Army building. In 2019, iStar Financial will open another hotel called 1101 Ocean with 54 hotel rooms, 100 condos, 23,000 square feet of retail space, and 415 parking spaces. A decade ago, other developers unsuccessfully attempted to redevelop 1101 Ocean. It remained a blighted and unsightly parcel until iStar stepped in to reclaim the site. The hotel is instrumental in bringing visitors to Asbury Park.

Asbury Park is ripe for economic revitalization. The city owns the station building and currently has a request for proposals (RFP) out for its redevelopment. In the interim, Asbury Park would like to begin offering public programs in the station. The station already serves as a backup venue for many city events and holds a lot of potential.

July 23, 2007 Steph_Admin Comments Off on Orlando Area Getting Commuter Rail