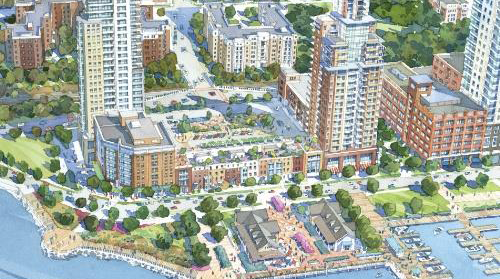 In August 2008, Yonkers Mayor Philip Amicone unveiled the latest revision of the Alexander Street Master Plan, part of the city’s ongoing effort to promote its downtown through transit-oriented development. Located 15 miles north of midtown Manhattan, Yonkers is New York State’s fourth largest city and home to four Metro-North rail stations, including Glenwood, which lies within the plan area, and the Yonkers station, just to the south. Travel between Yonkers station and Grand Central Terminal in midtown Manhattan can take as little as 25 minutes. The revised plan focuses on redeveloping a narrow strip of land between the Hudson River and Metro-North railroad tracks. Following review by the Community Development Authority, the plan is expected to be approved by the end of the year. City officials hope to capitalize on these significant transit resources, including the $43 million restoration of the historic Yonkers station completed in 2004 and the recent growth in Metro-North and Amtrak Empire service ridership. Metro-North ridership at the Yonkers station grew 5.9 percent from 2006 to 2007; ridership on Amtrak’s Empire Service increased by more than 8 percent from FY05 to FY07. Since 2007, NY Water Taxi has provided service to the World Financial Center and Wall Street.

The Alexander Street neighborhood plans call for 12 mixed-use towers to be built along the riverfront, some on land that is currently underwater. The height of the proposed towers is intended to draw attention to Yonkers station; the towers will range from 30 stories close to the station to 12 stories in the northern-most section of the redevelopment area. These new buildings will offer spectacular views of Manhattan and the Palisades and will provide as many as 3,750 housing units in the form of one- and two-bedroom condominiums, as well as a small number of studios. Plans also call for 209,850 square feet of neighborhood-scale, street-level retail space, along with 213,350 square feet of second floor office space. Attention is to be paid to the pedestrian experience, as designs for the new buildings are required to avoid blank walls and to use small, street-level signage. The new development plan also calls for 8.5 acres of new parkland and Yonkers officials will require developers to extend a riverfront esplanade by 1.3 miles. The esplanade is a recent addition to the Yonkers waterfront, with the first phase dedicated in September 2003. Until then, there was no public access between the Hudson River and downtown. Residents of adjacent neighborhoods should also gain better access to the river once improvements, such as a new bridge over the railroad tracks at Point Street, are completed.

An earlier version of the plan drew criticism from groups such as Scenic Hudson and the Yonkers Committee for Smart Development, which cited a perceived lack of public input and concerns about the loss of views of the river and the Palisades resulting from the new condominium towers. After the process was reopened to public comment, city officials reduced the number of towers from 19 to 12, reoriented the towers to mitigate the impact upon existing views of the Palisades, and added 4.5 acres of public open space.

The transit-oriented revival of Yonkers was initiated by Collins Enterprises, LLC with its recent completion of Hudson Park, a mixed-use development adjacent to the Yonkers Metro-North station and just steps from the NY Water Taxi terminal. Hudson Park reflects the desired development outcome of the Alexander Street Master Plan with three buildings containing 266 luxury rental apartments and about 15,000 square feet of retail space. Two residential towers—12 and 14 stories, each with ground-floor neighborhood retail—were built in a first phase. The residences are 95 percent occupied and the retail space is fully rented in these buildings. The recently opened second phase, a nine-story residential building, is now 40 percent occupied. Rental agents at Hudson Park estimate that between 65 to 70 percent of residents commute to work by train.