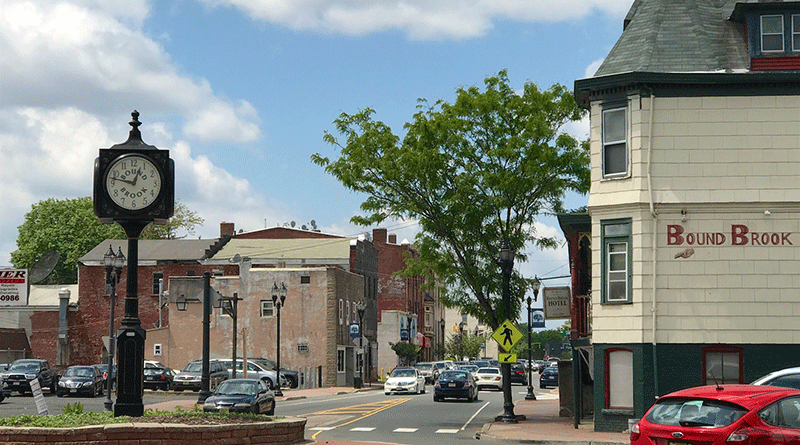 Bound Brook is on the cusp of a major turnaround, with a pipeline of new transit-oriented development projects that could potentially add 2,500 new residents, a 25 percent increase, within the next three years. While the Borough welcomes a growing population, it is also focusing on serving current residents, improving the region’s access to jobs, and creating a renewed sense of community.

As many of Bound Brook’s residents know, the Borough’s homes, businesses and infrastructure have frequently suffered from flooding after major storms, including Hurricane Floyd in 1999 and Hurricane Irene in 2011.  While the Borough lost population between 1970 and 1990, the number of residents has grown steadily since 1990 to its current level of about 11,000. The population is relatively young and diverse, with almost half of all residents identifying as Hispanic/Latino of any race in 2014, and about 30 percent foreign-born.

Residents breathed a sigh of relief with the completion of the $143 million Bound Brook section of the Green Brook Flood Control Project, which protects the three sides of the Borough. Overall, thirteen flood-prone communities in Somerset, Middlesex and Union counties will be protected by the Green Brook Flood Control Project, the cost of which will exceed $400 million when complete. Now, new developers, residents, and business owners are paying attention to Bound Brook, as the completion of the flood control project has significantly renewed confidence in the Borough’s future. Due to the flood protections, Bound Brook no longer requires property owners to have costly flood insurance, which had been required of roughly 500 downtown businesses. 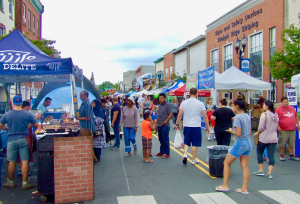 In addition to the potential influx in new residents, there are other encouraging signs of a revival.

With flood concerns no longer in the forefront for the Borough, the Borough Council and business community have been able to move forward on projects to attract new employers and residents to the downtown. One key driver for the Borough’s efforts is the Bound Brook Revitalization Partnership (BBRP), established in 2015 as a Special Improvement District (SID) to support the economic growth of businesses within the municipality. The BBRP is working to respond to a 13 percent decline in services downtown between 2004 and 2014, and to attract new business establishments to the Borough. According to their website, the BBRP is in the “midst of a multi-million dollar revitalization effort” to showcase the diverse array of businesses and people who operate them.

BBRP’s Downtown Manager, Dr. Lawrence McCullough, credits immigration as a strong contributor to downtown economic revitalization and says that the SID must continue to provide enhanced networking and educational opportunities, and access to small business loans and grants. Dr. McCullough, who has a background in the arts and non-profit community development, says he would like to expand the downtown’s role as an employment location, and capture a larger share of spending by residents, by attracting more businesses oriented toward health, technology, and the arts, as well as nonprofits. He looks forward to the growth of the official Arts District, which will be anchored by Hamilton Street Gallery and the Brook Arts Center housed in the former Brook Theater. McCullough believes the Arts District will create a “magnet effect” to increase revenue streams downtown.

Planning for a More Walkable Community and Access to the Riverfront

As part of the efforts to revitalize Bound Brook, the Borough Council is envisioning how to create a walkable community for all. Councilman Abel Gomez says one of the top agenda items for himself and others is creating “Complete Streets,” which involves designing for safe access to streets for all users by providing the appropriate infrastructure. Bound Brook adopted its Complete Streets policy in 2015. Councilman Gomez considers Bound Brook to be an ideal walkable community, comprising just a mile and a half of flat land where everything is in close proximity. The Complete Streets initiative will support the Borough’s efforts to make Bound Brook a true transit village. In 2003, NJDOT designated Bound Brook as a New Jersey Transit Village, which qualifies the Borough for Transit Village grants to fund streetscape, transit station and other improvements.

To promote street safety, the Borough supports a new campaign led by a group of students called the “Student Ambassadors for Community Health.” The students, working with Somerset County 4-H and Middle Earth, a nonprofit agency providing services to teens and adolescents in Somerset County, also received funding from New Jersey Health Initiatives. The student group built a parklet (named Piña) as a sidewalk extension to convert curbside parking into a temporary community gathering space. They also used colorful murals and crosswalk improvements to raise awareness of pedestrian safety.

[The parklet] brings some of the cultural art we’re looking for in the town as part of the greater plan to transform Bound Brook from a sleepy town to something new and vibrant. … We don’t want everything to be big box, but something unique that you can’t get anywhere else.” Abel Gomez, Bound Brook Councilman

In spring 2018, the Borough teamed with a graduate studio class from the Rutgers University Bloustein School of Planning and Public Policy. Planning students developed a “Pedestrian and Bicycle Travel Plan” for Bound Brook and neighboring South Bound Brook, which incorporated feedback and outreach to students from Middle Earth. This work was supported in part by the NJ Safe Routes to School program, a statewide initiative led by NJDOT to enable and encourage students to walk and bicycle to school safely, and will be used to inform efforts to develop a broader Bicycle/Pedestrian plan for the community. Bound Brook has used information from the plan to apply for federal infrastructure grant funding, while South Bound Brook has used the plan in support of the adoption of their first Complete Streets policy.

The Borough is actively pursuing funding to improve the town’s public spaces. The neighborhood around the train station is a major area being targeted for a new public space. A consultant has presented a proposal to transform the Van Horne Public Plaza (adjacent to the train station) into a pedestrian mall, free from vehicular traffic. The plan lays out the street to symbolically reference the Raritan River. More details can be found in the Bound Brook Plaza Vision Plan. Currently, the 1/2-acre space contains two gazebos, a fountain, seating and planting areas, but is mostly used for parking and vehicular circulation.

Along with the increased focus on attracting businesses and improving public spaces, the Borough has turned its attention to attracting new residents and increasing housing density to achieve its transit village goals. In recent years, Bound Brook has added 300 new apartment units, and close to 600 more units are in the construction or planning phase. To facilitate this growth, in 2014 the Borough began implementing recommended changes to its zoning ordinances, such as increasing building height requirements (all new construction on Main Street must be at least five stories high), reducing parking requirements and restrictions, and making ordinances more transparent and easier to interpret. With new developers breaking ground, the Borough has seven apartment buildings planned for completion within the next three years. This work is projected to add 1,600 individual apartment units and 2,500 new residents.

Council President Abel Gomez credits the $30 million Meridia Main Station retirement community project, completed in 2014, as the “critical anchor” that assured developers that demand for housing in Bound Brook was strong. By late 2014, the Meridia had filled nearly all 240 units, with rents ranging from $1,200 to $1,800 per month. The building is less than a five-minute walk from the Bound Brook train station. According to Mr. Gomez, the Meridia, the first major project in the Borough in 60 years, was completed before the flood control project was completed. He noted, “It was proof of concept for other developers. The developer that built there is world renowned and has built all over New Jersey.” Mr. Gomez explains that for the Borough, the project was a big win because it allows them to update the downtown and attract a new population to the Borough. He adds, “The Meridia Main Street Station project was completed due to a sense of belief in our town and what we have to offer.” In 2017, the developer of the project, Capodagli Property Group, received top honors at the Somerset County Land Development and Planning Awards in the category of Demonstrated Cooperation between Local Officials and Applicants Promoting Sound Planning Practices.

Recently, the old Bound Brook Hotel located across from Meridia Main Station was torn down for the six-story REVO Bound Brook, which will have 100 apartments with 5,740 square feet of retail on the first floor. In June 2018, Accurate Builders & Developers broke ground for Crossings at Raritan, a planned 276-unit apartment building adjacent to Raritan Station.

The Brook, which also recently broke ground, will have 64 units on the north side of West Main Street, and is planned for completion by October 2019, according to its developer Sterling Bridge and affiliate Reynolds Asset Management. Plans include a rooftop yoga studio, gym, and balconies on all units, and a first-floor gastropub. The Brook is the first of three phases that will deliver 156 units overall at the site of a former gentlemen’s club. There will be a mix of one- to two-bedroom units with expected rents around $1,395. Louis Reynolds of Ridgewood-based Reynolds Asset Management described The Brook as transit-oriented, built for people who don’t want a car, and fitting for recent college graduates who have found jobs in New York City.

An even bigger building from developer Lou Reynolds, tentatively called The Scalene, is in the conceptual stage and will be located on the south side of Main Street. The Scalene would be one of the tallest structures in Somerset County with 16 stories, including 196 apartments, 4 stories of parking, and commercial uses on the first floor.

From a rebounding downtown, more pedestrian-friendly streets, and a wave of dense, mixed-use developments and new residents, Bound Brook is expecting many changes in the coming years. However, the Borough must still overcome some key obstacles. To maximize its potential as a transit village, it will need to support commuters by continuing to improve its transit station connectivity and pushing for long-awaited train service improvements, such as permanent one-seat peak service to NY Penn Station (temporarily suspended this summer) and improved communications about delays.

Bound Brook residents, as well as the government and private sector, are all invested in transforming the Borough. According to Dr. McCullough, the Borough’s governing officials have effectively demonstrated bi-partisan collaboration in support of the SID and business development. Meanwhile, the Borough is continuing to work with NJ TRANSIT on plans to upgrade its train station waiting room.

It’s about creating a green space infrastructure that is really beginning to anchor ourselves, where the river is no longer a detriment, but an asset.” Abel Gomez, Bound Brook Councilman

Councilman Gomez sees access to the riverfront as the next big initiative facing the council. Currently, most of the county is isolated from the Raritan River. With the 2015 Riverfront Access Plan, which includes pedestrian and bicycle trails, the Borough hopes to transform the area into a welcoming public space. As a sign of things to come, in May 2018, the Borough announced a new boat and canoe launch site under the Queen’s Bridge, the first step of the Borough’s Riverfront Access Plan to restore public access to the Raritan River. The plan includes the creation of a waterfront park and a riverfront trail system. Step by step, Bound Brook is sailing towards a more vibrant, walkable and revitalized community.