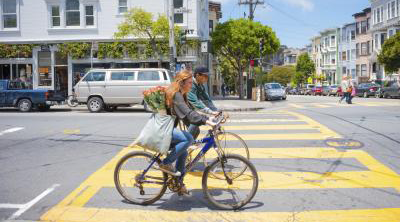 California Governor Arnold Schwarzenegger recently signed into law SB 375, declaring it an “historic state-local partnership” to fight suburban sprawl and reduce greenhouse gas emissions. The bill, which contained a controversial provision regarding transit-oriented development, has been hailed as the nation’s first legislative attempt to link land use and transportation as a way to reduce greenhouse gas emissions.

The new law requires the state’s regional planning agencies to create sustainable growth plans designed to meet greenhouse gas emission reduction goals set by the California Air Resources Board. Priority for state transportation funds (totaling up to $20 billion a year) will be given to local development projects that conform to their regional plans. The law ties together regional transportation spending and housing planning for the first time in the nation’s history.
In a compromise with developers, residential in-fill and transit-oriented projects in line with the regional plan will be exempt from strict environmental review. These exemptions, which were seen as necessary to gain the support of builders, caused some environmentalists to oppose the legislation. Proponents argued that by building denser, mixed use projects near existing development, driving distances and time would be lowered. This smarter growth pattern should, therefore, lead to fewer greenhouse gas emissions as people may choose not to drive, drive shorter distances, and gain better access to public transit.

The sponsor of the bill, Senate President Darrell Steinberg (D-Sacramento), said the new law provides a “national framework for fighting sprawl,” but its success will depend ultimately on whether regional planning agencies take its aims for smart growth seriously. It will take up to three years to adopt the new standards and plans, but if they succeed in promoting denser, transit-oriented growth, California could provide a model for the use of government incentives for smart growth.